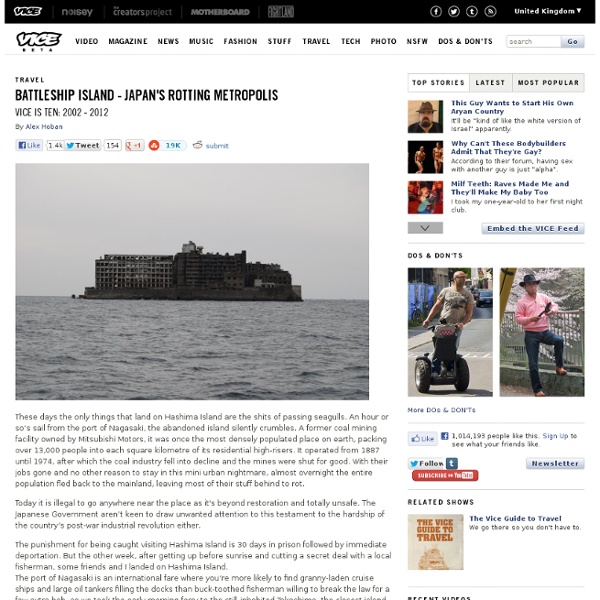 These days the only things that land on Hashima Island are the shits of passing seagulls. An hour or so’s sail from the port of Nagasaki, the abandoned island silently crumbles. A former coal mining facility owned by Mitsubishi Motors, it was once the most densely populated place on earth, packing over 13,000 people into each square kilometre of its residential high-risers. It operated from 1887 until 1974, after which the coal industry fell into decline and the mines were shut for good. Today it is illegal to go anywhere near the place as it's beyond restoration and totally unsafe. The punishment for being caught visiting Hashima Island is 30 days in prison followed by immediate deportation. Bobbing into view, the grey seawall’s artificial angling of the island gives it the shape of a battleship – hence its Japanese name in popular mythology, "Gunkanjima" - Battleship Island. We explored the empty classrooms of the island’s huge school.

Abandoned Six Flags New Orleans Hurricane Katrina killed this clown. According to the photographer, “An abandoned Six Flags amusement park, someone spray painted ‘Six Flags 2012 coming soon’ on the wall above the downed head. But they were clownin.’ Welcome to Zombie Land kids! Chained dreams of fun at Six Flags New Orleans, abandoned Jazzland – that’s what Six Flags opened as “Jazzland” in 2000. Some photographers can see past the lifeless amusement park’s decay and desolation, showing us that there is still a chance the place could be cheery and not cheerless. Like a Bad Dream. Just in case you don’t know the scoop on what Hurricane Katrina did to New Orleans and Six Flags, this photo is of New Orleans, LA, on Sept. 14, 2005. Unlike the bleak amusement-less park above, some photographers can still see and share with us the echo of magic in the abandoned theme park Six Flags – even 6 years later in 2011. Once upon a time, Six Flags was filled with children’s laughter – but now it’s sad, silent, and surreal.

Abandoned Places: 10 Creepy, Beautiful Modern Ruins Abandoned Places: 10 Creepy, Beautiful Modern Ruins Abandoned Places | We humans are explorers by nature. The quest for discovery, both old and new, is part of what separates us from rest of the animal kingdom. Since the world we live in has been largely mapped and plotted, we urban adventurers turn our sights toward the relics of old and the ruins of the recent past. Abandoned Submarine Base, Ukraine In a bay on the northern shores of the Black Sea, the Soviet army maintained an elaborate submarine base throughout much of the Cold War. Abandoned Submarine Base Gallery The Ruins of Detroit by Marchand and Meffre In the United States, few cities have felt the burn of urban decay more than Detroit. Ruins of Detroit Gallery Beelitz Military Hospital, Berlin It is rare that a ruin like this should decay so gracefully and without the marks of vandalism. Beelitz Military Hospital Gallery City Hall Subway Station, NYC City Hall Subway Station Gallery Ryugyung Hotel, Pyongyang, North Korea

Cool Bedroom Designs Cool Bedroom Designs If you are thinking about the arrangement of your bedroom take a look at our suggestions. Perhaps these suggestions will inspire you. If you do not have a sea view you can buy a wallpapers : ) All deficiencies replace it with some decorative items. Plaster work are very simple and will make your room magical. If you do not have the opportunity to create pool in the bedroom you draw it or buy a pool carpet. source source source source source source source source source source You don't want to miss these: Bought for £1, the mysterious tower that inspired JRR Tolkien | Society It wasn't the most promising of pitches: when Ben Bradley suggested that a homeless charity buy a derelict, windblown Georgian tower in a poor district of Birmingham he expected, and got, some blank looks. The building is spectacular but perilous. It sways slightly in strong wind and its seven rooms – one on each storey – are the size of a hearth rug. But, said Bradley: "As it turned out, my CEO is a Tolkien fanatic, and so the deal was done." The Trident Reach the People charity paid £1, and became proud owners of one of the oldest and most eccentric structures in Birmingham, a building better known in Japan than it is on the other side of the city. The eyeball-shaped windows at the top of Perrott's Folly look down in one direction on where JRR Tolkien lived as a child, and in the opposite direction on the Oratory, where he went to school. The folly stood at the heart of a magnificent park when it was built by a local eccentric, John Perrott, in 1758.

Home of the Virtual Body The house that time forgot: Hundreds of antiquities discovered in country mansion where little has changed in 100 years Auctioneers discovered a treasure trove of antiques inside The HermitageThey discovered wine from 1914 and Champagne from 1919Also discovered family photographs spanning almost 100 yearsContents of the house will be auctioned in 1,500 lots By Anthony Bond Published: 16:00 GMT, 5 June 2013 | Updated: 21:41 GMT, 5 June 2013 Thousands of people have driven past this mansion over the years and looked at its impressive exterior. But few could have imagined the secrets which the 18th Century building holds inside. The mansion, called The Hermitage, in Northumberland, has been described as the house 'that time forgot'. Antiques: Items untouched for almost 100 years were discovered amongst the 28 rooms in 18th Century mansion The Hermitage in Hexham, Northumberland Secrets: The cellars of the house included unopened Champagne bottles from 1919, some in their original tissue paper, and wine from 1914 Wine from 1914 was discovered along with Champagne from 1919.

Top 10 Misconceptions of Koreans | Teaching Kimchi They all like kimchi. Not too long ago, I saw an ad in a Korean magazine for a small refrigerator specifically for kimchi. Since it said “#1 best seller,” I’m guessing it sells a lot. Still, it’s kind of like saying all Americans love hamburgers, isn’t it?They all know Tae Kwon Do. I know Tae Kwon Do; I’m Japanese-American. In the June 30, 2002 article of the New York Times titled, “Soccer Must Keep The Ball Rolling,” the writer elaborated on a controversial referee call in the match between South Korea and Spain on June 22 in the FIFA World Cup of that year. If the writer intended to be subjective, fine, but let’s not pretend he’s calculated Korean history into his judgment that a) there was a plot, and it showed a blend of b) jingoism and c) paranoia that was d) unbecoming. Korea is often referred to as “the shrimp that gets caught in the middle of whales.”

12 Software Dreaming Life What is a Lucid Dream? “A lucid dream is a dream in which the person is aware that he or she is dreaming while the dream is in progress. During lucid dreams, it is often possible to exert conscious control over the dream characters and environment, as well as to perform otherwise physically impossible feats.” (wikipedia) Have you ever wanted to lucid dream? Whatever your situation, if you’d like to have a lucid dream, the time to start is now. Happy Dreaming! InfinityDownload: Click Here to Download! DreamPort Home PageOfficial Description: “The purpose of Infinity is basically to allow the user to have lucid dreams in the time frame of 1 to 2 weeks. “It’s a day to day plan where you basically keep adding on more and more activities to a routine that you establish. Note: The Goods must be installed on your computer for Infinity and Paradiso to work. Download Infinity! Paradiso Download: Click Here to Download! DreamPort Home PageOfficial Description: DreamPort Home Page Official Description:

Abandoned Amusement Park Amusement park is the generic term for a collection of rides and other entertainment attractions assembled for the purpose of entertaining a large group of people. An amusement park is more elaborate than a simple city park or playground, usually providing attractions meant to cater to adults, teenagers, and small children. A theme park is a type of amusement park which has been built around one or more themes, such as an American West theme, or Atlantis. Today, the terms amusement parks and theme parks are often used interchangeably. Most amusement parks have a fixed location, as compared to travelling funfairs and carnivals. These temporary types of amusement parks, are usually present for a few days or weeks per year, such as funfairs in the United Kingdom, and carnivals (temporarily set up in a vacant lot or parking lots) and fairs (temporarily operated in a fair ground) in the United States.

A completely renovated first apartment Pages Search Eames Lounge Chair, Barcelona Chair, Marble Tulip Tables - Exclusive at Rove Concepts Colorado real estate and homes Kim's personal links MY FAVOURITE DECOR SHOPS IN OTTAWA kitchen remodel in my last house my twin sister's mostly kid's rooms decor blog « WINKS | Main | Valerie and Alan's bathroom remodel » Friday Aug132010 A completely renovated first apartment Posted on Fri, 13 Aug 2010 by kim 540 Comments We received an email from Ron and it started off like this: "I'm 27 years old and live in Tel Aviv Israel, currently an industrial design student. And some info on what went on after they had their way with their new apartment: "In short we re-did the whole place:Tore down the wall in the kitchen opening it up to the living room and dining area. I cannot even put into words how in awe I am of Ron's talent. And SO MUCH MORE after the jump. Reader Comments (540) Wow! 13 Aug 2010 | Mike The green bedroom is fabulous! Michelle Okay, that faucet/towel rack in the bathroom is genius! Erin Racu ab m

Olympic Games Posters 1896 to 2012 The 2012 Summer Olympic Games will begin tomorrow, on July 27th in London, United Kingdom. I thought it would be interesting to see how the design trends in Olympic posters have changed during the years. In this article you will find every official poster of the Summer Olympic Games from 1896 to 2012. Let the games begin! No official poster was made for the 1896 Olympic Games, but the cover page of the official report is often used to refer to the Games of the I Olympiad. Which one is you favorite poster? You may also want to see Winter Olympic Games Posters from 1924 to 2010 Here are 21 reimagined cult movie posters I would love to hang up in my home. Please leave your comment about this post on the comment section below.