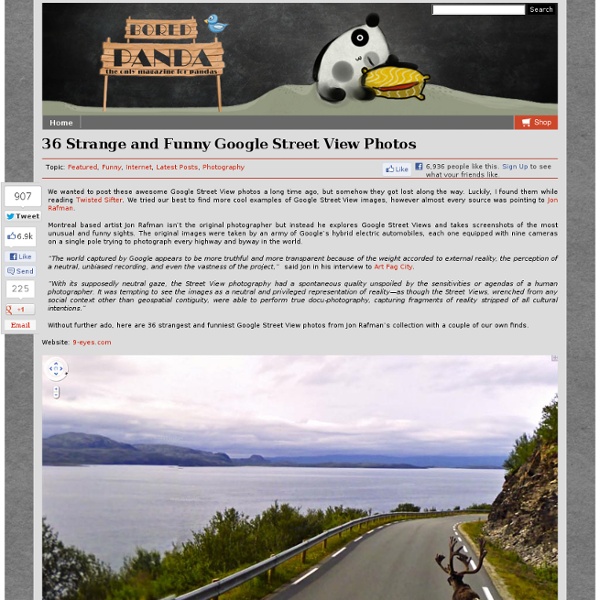 We wanted to post these awesome Google Street View photos a long time ago, but somehow they got lost along the way. Luckily, I found them while reading Twisted Sifter. We tried our best to find more cool examples of Google Street View images, however almost every source was pointing to Jon Rafman. Montreal based artist Jon Rafman isn’t the original photographer but instead he explores Google Street Views and takes screenshots of the most unusual and funny sights. The original images were taken by an army of Google’s hybrid electric automobiles, each one equipped with nine cameras on a single pole trying to photograph every highway and byway in the world. “The world captured by Google appears to be more truthful and more transparent because of the weight accorded to external reality, the perception of a neutral, unbiased recording, and even the vastness of the project,” said Jon in his interview to Art Fag City. Website: 9-eyes.com

Marvel at the Magnificent Marble Caves Can you imagine something happening that would endanger these exquisite azure caverns? It might if Chile continues with plans to build five hydro-power dams in Patagonia. Photo #7 by © Jorge Leon Cabello The water has eroded the marble to create cavities and marble caves. Amazing geological formations on Chilean side of Lake Carrera. It would be a real shame if the hydro-power dams damage the lake and the marble caves on top of the surrounding natural habitats for wildlife. View of the lake and where to find the marble caverns in the Aysen region of Chile.

Real Weddings I love the rich jewel-toned colors of this wedding! Captured by Jen Stewart Photography , Emilie and Anthony were married this past June in a gorgeous ceremony in a rose garden in Sacramento, California. The couple met during medical school and their ceremony was performed by a doctor friend/instructor. The ceremony aisle was decorated with trails of big blooms, leading to a bamboo chuppah draped in airy, white fabric. Rich, jewel tones and peacock feathers were used throughout the wedding party attire and decor. At the reception, lush floral arrangements decorated each table in the penthouse room. A few words from the bride: Anthony and I met during our first year of medical school at UC Davis.

Photos That Will Make Your Stomach Drop Posted by admin on May 1, 2013 in Nature | 39 comments If you love to do something that is uncommon, and what people do just few times in whole year, than you must try to do something like this on photos below. Maybe you will feel strange while you looking at this photos, you will see, who knows. 1. 2. 3. 4. 5. 6. 7. 8. 9. 10. 11. 12. 13. 14. 15. 16. 17. 18. 19. 20. 21. 22. 23. The Three Phases of Life One of life's great fascinations is watching people evolve over time. Some people grow and develop, while others seem to be stuck in patterns that limit their happiness and well-being. Others excel in certain areas of their lives while failing miserably in others. A small few are spectacularly successful by conventional measures yet are perpetually dissatisfied. Is there a simple model we can use to make sense of these observations? Many years of watching and thinking have led me to believe that we can further our understanding by simplifying the problem. I want to be a little precise with words here. Why is this important? Schlepper Let us begin with the first state. This term comes from the Yiddish verb "schlep," which means "to drag." Literally, a schlepper is a carrier. First of all, just because you are schlepping does not mean you are forbidden to think. In general, we all need to schlep. Schleppers quickly perceive the great injustice of life. So, we all start out as schleppers.

Amazing Collection of Beautiful Places and Spaces Our planet is far more impressive than we could imagine. It has the power to build landscapes that amaze us even after seeing them a few times. In this article I have gathered pictures of places and spaces in our beautiful world that are simply amazing and must be seen. Enjoy. 1. Located about 100 miles north of Reno, Nevada, is the tiny town of Gerlach. The most striking aspect of the Fly Geyser is its vibrant colors, which are caused by thermophilic algae. 2. The Ice Castles in Silverthorne are man-made ice formations created by Utah’s Brent Christensen. 3. This waterfall is very famous in Tuscany because is an open-air free hot spring. The waters of Saturnia Therme are sulphureous-carbonic-sulphate-bicarbonate-alkaline. 4. Neuschwanstein Castle is a 19th-century Romanesque Revival palace on a rugged hill above the village of Hohenschwangau near Füssen in southwest Bavaria, Germany. 5. The Sagano Bamboo Forest is one of Japan’s national treasures. 6. 7. 8. 9. 10.

50 Amazing Finds on Google Earth Google Earth is a virtual globe, map and geographical information program. It maps the Earth by the superimposition of images obtained from satellite imagery, aerial photography and geographic information system (GIS) 3D globe. Just like their data-rich Maps and Street View offerings, Google Earth is a treasure trove of oddities. You’ve no doubt already come across some interesting finds on Google Earth. The post below attempts to compile the most fascinating sites other have stumbled upon browsing Google Earth. From natural formations to human structures, the world is a different place when viewed from above. If you’re interested in seeing any of the places yourself, I’ve included the coordinates for every image shown below. 1. 2. *Update* This is a land art project called Desert Breath by the D.A.ST. 3. 4. 5. 6. 7. 8. 9. 10. Located in the fertile agricultural region of Argentina’s ‘Pampas’ is a guitar-shaped forest made up of over 7,000 cypress and eucalyptus trees. 11. 12. 13. 14.

5 Popular Beliefs That Are Holding Humanity Back Humans believe in a lot of stupid shit, and we do something stupid as a result of those beliefs about, oh, once every five seconds. And sure, most of you reading this are educated types who don't believe in Bigfoot or psychic readings, but there are a whole bunch of equally stupid/harmful superstitions out there that are so commonly held that we don't even think of them as such. Very few of us don't fall victim to at least a few of them. In fact, I'm something of an expert on this because I believe literally hundreds of idiotic things, and also because I wrote a ridiculous best-seller about an apocalypse brought about by people believing in apocalypses. #5. Jupiterimages/Photos.com/Getty Images The headlines will make a lot more sense to you once you understand one simple fact: About 60 percent of Americans believe that Jesus Christ and his angels will descend from heaven and destroy the planet, and about 40 percent of Americans think it will happen within the next few decades. #4. #3.

52 Places to Go in 2015 A revitalized city welcomes the world. Sure, Italy is rich with romantic cities like Florence, Venice and Rome — but its most vibrant might just be Milan. And this is the year for tourists to explore its charms, as it hosts the 2015 World Expo. Twenty million visitors are expected to visit the city for the Expo, a mammoth event that runs from May through October and involves more than 130 participating nations and organizations sponsoring more than 60 pavilions. The Expo’s theme focuses on food, nutrition and sustainability practices — a fitting choice for a city steeped in Italian culinary traditions. The Expo coincides with the completion of a number of urban renewal projects that are infusing new life into overlooked quarters, like La Darsena, a formerly dilapidated harbor that will feature tree-lined promenades, bike paths and piazzas. And Milanese restaurants are earning acclaim for their increased focus on diverse regional cuisines from across the Italian peninsula.