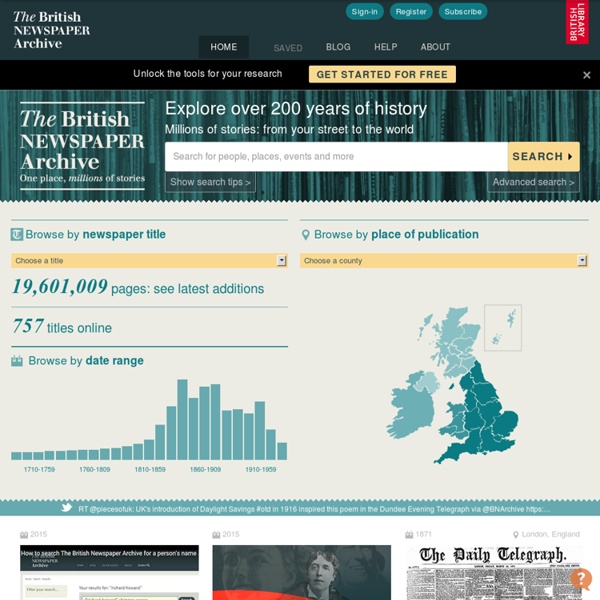 American Time Use Survey Home Page The American Time Use Survey (ATUS) measures the amount of time people spend doing various activities, such as paid work, childcare, volunteering, and socializing. In 2015, 38% of workers in management do some work from home on days they work In 2015, 38 percent of workers in management, business, and financial operations occupations, and 35 percent of workers in professional and related occupations, did some or all of their work from home on days they worked. Workers in other occupations were less likely to work from home. HTML | PDF | RSS In 2013-14, 47% of the 40.4 million eldercare providers in the U.S. work full time

Sound Recordings Blog Cheryl Tipp, Natural Sounds Curator writes: Over the past 5 weeks, listeners of BBC Radio 4 have been treated to a series dedicated entirely to sound and its many roles in human culture over the past 100,000 years. Noise: a Human History, written and presented by Professor David Hendy and made in collaboration with the British Library's Sound Archive, has explored a multitude of subjects, from the power of great orators to the significance of resonant spaces. India Office Select Materials The main focus of the catalogues is on the countries of South Asia, although there are also considerable holdings relevant to other parts of Asia and the Middle East. You can: • search the Prints & drawings or Photographs collections separately. • search for visual material in any medium by selecting All images. • read about the scope and history of the two collections. For details of how to use the system, see our search tips.

The Fuggerzeitungen versione in italiano, pagina 2 | Deutsche Version, Seite 3 In recent years, historical research in the German-speaking world and beyond has increasingly focussed on the study of communication and the media through history. In between “private” exchanges of letters and “public” media, this field of studies encompasses the origins of newspapers and journalism. General Social Survey The GSS contains a standard 'core' of demographic, behavioral, and attitudinal questions, plus topics of special interest. Many of the core questions have remained unchanged since 1972 to facilitate time-trend studies as well as replication of earlier findings. The GSS takes the pulse of America, and is a unique and valuable resource. It has tracked the opinions of Americans over the last four decades. Trends The GSS is widely regarded as the single best source of data on societal trends.

UK Third Sector Trends Study Northern Rock Foundation’s Third Sector Trends Study is a ground-breaking research programme on the scale, dynamics and needs of the voluntary, community and social enterprise sector in North East England and Cumbria. The Study is for the first time providing robust, comprehensive and freely available local and regional evidence to describe the sector. The Study will help sector organisations, infrastructure agencies, funders and government bodies who all need better information about the characteristics and activities of the third sector groups. Better data will help to improve funding negotiations, policy development and service planning.

Americas Collections Blog As a historian I get very excited about old letters, diaries, account books and inventories – but once in a while there are other ‘records’ that trump almost everything else. I had one of those moments this week when I returned to George Washington’s Mount Vernon. Over the past six years I have been many times to Washington’s estate in Virginia (just south of Washington DC) – first to research my book Founding Gardeners and then to give talks about the book.

Francophone Caribbean Collections France was at the forefront of the "Scramble for Africa" and accounts of the exploration and colonisation by France can be found in the Library's collections. The first French flag raised at Loango, Republic of Congo (Brazzaville) Congo français. Loango. Cahiers d'enseignement no. 71. Colonies françaises.(Shelfmark: 12204.h.2.).

World Wealth Report 2011 Wealth and population of global HNWIs surpass pre-crisis levels in nearly every region as HNWI wealth reaches US$42.7 trillion The world’s high net worth individuals (HNWIs) expanded in population and wealth in 2010 surpassing 2007 pre-crisis levels in nearly every region, according to the 15th annual World Wealth Report from Merrill Lynch Global Wealth Management and Capgemini. The World Wealth Report covers 71 countries in the market-sizing model, accounting for more than 98% of global gross national income and 99% of world stock market capitalization. The report has built a strong and lasting reputation as the industry benchmark for HNWIs market sizing—originally at a global and regional level but increasingly at a country level. Download the Report to learn more about trends in HNWI wealth worldwide. The report is available in English, Simplified Chinese, Traditional Chinese and Japanese.

India Office Records On the abolition of slavery in the early 19th century, owners of plantations in the British and French colonies of the Caribbean began to search for a new supply of labour. They found it in India. Workers were recruited, mainly from the Bengal and Madras areas, to work on the plantations for fixed periods. The Government of India became responsible for regulating the emigration and for safeguarding workers' welfare during their stay, under a scheme that became known as the indentured labour system. From around 1860, the flow of emigrants increased. Jamaica, Trinidad and Demerara (later British Guiana) were the main destinations; labourers also went to Grenada, Tobago, St Lucia, St Vincent, Guadeloupe and Martinique.

The most amazing online resource for newspaper archives yet. The British Library will digitize for than 40 million pages over the next 10 years. Search is free but you need to buy credits to view your results. by marylenegoulet Sep 28