AGROBERICHTENBUITENLAND_NL 12/09/19 Bt maize leads to an additional maize production of 1.89 M tons in Spain and Portugal. Nieuwsbericht | 12-09-2019 | 12:00 Article by British agricultural economist assesses the economic and environmental impacts that have arisen from the adoption and use of genetically modified (GM) insect resistant (IR) maize in Spain and Portugal in the 21 years since first planted in Spain in 1998. 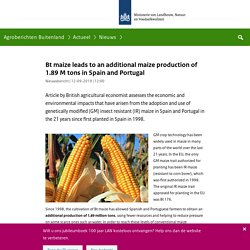 GM crop technology has been widely used in maize in many parts of the world over the last 21 years. In the EU, the only GM maize trait authorized for planting has been IR maize (resistant to corn borer), which was first authorized in 1998. The original IR maize trait approved for planting in the EU was Bt 176. Since 1998, the cultivation of Bt maize has allowed Spanish and Portuguese farmers to obtain an additional production of 1.89 million tons, using fewer resources and helping to reduce pressure on some scarce ones such as water.

Between 1998 and 2018, the total area under Bt maize in the two countries was 1.65 million hectares. Spain Click here for the full article in English: SCIENTIFIC REPORTS 17/07/19 No impact of transgenic cry1Ie maize on the diversity, abundance and composition of soil fauna in a 2-year feld trial. MICROORGANISMS 24/03/19 The Chronic Effect of Transgenic Maize Line with mCry1Ac or maroACC Gene on Ileal Microbiota Using a Hen Model. UNIVERSITY OF NEBRASKA - 2011 - Thèse en ligne :Comparative susceptibility of Ostrinia furnacalis, Ostrinia nubilalis,and Diatraea saccharalis (Lepidoptera: Crambidae) to Bacillus thuringiensis Cry1 toxins. TOXINS 14/03/19 Engineering of Bacillus thuringiensis Cry Proteins to Enhance the Activity against Western Corn Rootworm. 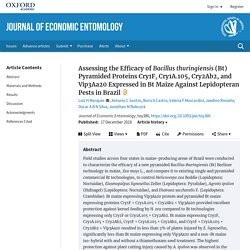 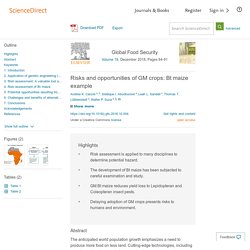 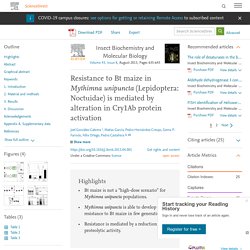 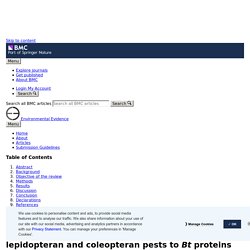 Therefore, we collected data on the baseline susceptibility of different lepidopteran/coleopteran maize pests. Besides the use of Bt proteins in Bt maize insecticidal Bt proteins are used also in sprays like Dipel®. These are applied against different insect pests worldwide [14] in both organic and conventional agriculture [15]. Considering our inclusion criteria, we searched for studies of the Bt proteins that are expressed in commercial Bt maize varieties and that are toxic to European target organisms. Therefore, we excluded studies that used Bt formulations or the untruncated version of the Bt proteins for testing (23% of the studies). WAGENINGEN UNIVERSITY – Présentation : Uncertain and irreversible benefits and costs of the adoption of Bt maize. SOUTH AFRICAN JOURNAL OF SCIENCE - 2018 - Community composition and functions of endophytic bacteria of Bt maize. Rasheed A. 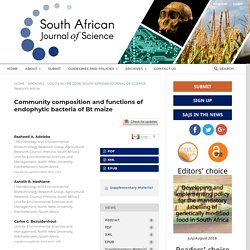 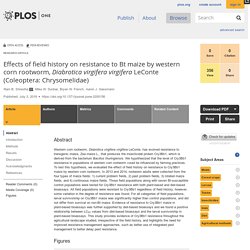 We hypothesized that the level of Cry3Bb1 resistance in populations of western corn rootworm could be influenced by farming practices. To test this hypothesis, we evaluated the effect of field history on resistance to Cry3Bb1 maize by western corn rootworm. In 2013 and 2014, rootworm adults were collected from the four types of maize fields: 1) current problem fields, 2) past problem fields, 3) rotated maize fields, and 4) continuous maize fields. Those field populations along with seven Bt-susceptible control populations were tested for Cry3Bb1 resistance with both plant-based and diet-based bioassays. Editor: Dean E. Ciênc. agrotec. vol.41 no.2 Lavras Mar./Apr. 2017 Efficacy of transgenic mayze insecticide treatment to control fall armyworm in late-season maize in São Paulo state, Brazil. Late-season maize in Brazil is characterized by rainfed cultivation, and is sown between January and April, after the summer crop, usually after early soybean. 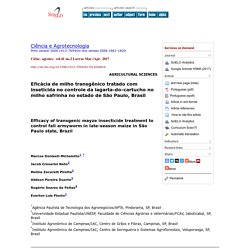 In the 2015 growing season, the acreage of late-season maize in the state of São Paulo was 370,100 hectares and the mean yield 4494 kg ha-1 (Conab, 2015). One of the main factors compromising the yield of late-season maize is the incidence of insect pests, whose populations have increased every year, reducing crop yields and thus causing losses to farmers (Fernandes; Carneiro, 2006). Pesq. agropec. bras. vol.53 no.2 Brasília Feb. 2018 Transgenic Bt maize does not affect the soil ant community. 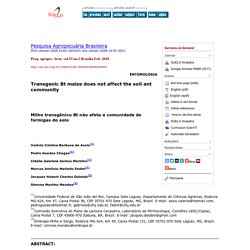 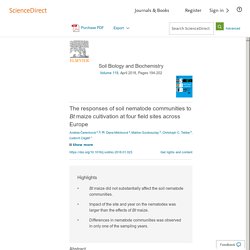 Please enable JavaScript to use all the features on this page. Highlights Bt maize did not substantially affect the soil nematode communities. Impact of the site and year on the nematodes was larger than the effects of Bt maize. Differences in nematode communities was observed in only one of the sampling years. Abstract. Trends in Food Science & Technology Volume 73, March 2018, How can China prepare for the domestic cultivation of Bt maize?

JavaScript is disabled on your browser. Please enable JavaScript to use all the features on this page. Highlights. EFSA 11/07/18 Assessment of genetically modified maize Bt11 x MIR162 x 1507 x GA21 and three subcombinations independently of their origin, for food and feed uses under Regulation (EC) No 1829/2003 (application EFSA‐GMO‐DE‐2010‐86) VKM_NO 06/07/17 Cultivation of genetically modified maize 1507 will unlikely harm environment and agriculture in Norway. The Norwegian Environment Agency and the Norwegian Food Safety Authority requested the Norwegian Scientific Committee for Food Safety for an opinion of potential risks to biodiversity and agriculture in Norway associated with import of seeds and cultivation of insect-resistant and herbicide-tolerant genetically modified maize 1507. VKM was also requested to assess the applicant´s post-market environmental monitoring plan, and the management measures suggested in the draft implementing decision of the European Commission.

Maize 1507 The genetically modified maize 1507 has been developed to provide protection against certain lepidopteran target pests, such as the European corn borer (ECB, Ostrinia nubilalis), and some species belonging to the genus Sesamia. The insect resistence is achieved by the expression of a synthetic version of the truncated cry1F gene. Environmental risks There are no reports of the target lepidopteran species attaining pest status on maize in Norway. Coexistence. VKM_NO 06/07/17 Cultivation of genetically modified maize Bt11 is unlikely to harm environment and agriculture in Norway. The Norwegian Environment Agency and the Norwegian Food Safety Authority requested the Norwegian Scientific Committee for Food Safety for an opinion of potential risks to biodiversity and agriculture in Norway associated with import of seeds and cultivation of insect-resistant and herbicide-tolerant genetically modified maize Bt11.

VKM was also requested to assess the applicant´s post-market environmental monitoring plan, and the management measures suggested in the draft implementing decision of the European Commission. Maize Bt11 The genetically modified maize Bt11has been developed to provide protection against certain lepidopteran target pests, such as the European corn borer (ECB, Ostrinia nubilalis), and some species belonging to the genus Sesamia.

Acknowledgment The Panel wishes to thank the members of the three Standing Working Groups on Molecular Characterisation, Food/Feed and Environment of GMO applications for the preparatory work on this scientific output, and Yann Devos, Zoltan Diveki, Andrea Gennaro, Yi Liu, Sylvie Mestdagh and Stefano Rodighiero for the support provided to the development of this EFSA scientific output.Contact gmo@efsa.europa.eu Abstract. Swedish University of Agricultural Sciences UPPSALA - 2013 - Thèse en ligne : From Betterment to Bt Maize Agricultural Developme. Journal of Central European Agriculture, 2013, 14(2), p.194-212 Comparison of some aspects of the bionomy of Ostrinia nubilalis. EFSA 11/12/12 Scientific Opinion supplementing previous conclusions and recommendations on maize Bt11 and MON 810 for cultivatio. EFSA Journal 2012;10(12):3016 [32 pp.]. doi:10.2903/j.efsa.2012.3016. JOURNAL of Horticulture, Forestry and Biotechnology JOURNAL of Horticulture, Volume 16(1), 202-206, 2012 Evaluation of the genet.

Texas Tech University - AOUT 2012 - Which Farmers Benefit the Most from Bt Corn Adoption in the Philippines? Estimating Heteroge. ARS USDA 07/10/10 New Study Shows Benefits of Bt Corn to Farmers. CHECKBIOTECH 14/12/10 Auburn researchers evaluate Bt corn hybrids. Whenever you buy insurance, it’s helpful to weigh the cost versus the benefit. In other words, does the inherent risk justify the premium being paid? The same should be true whenever a grower makes the decision of whether or not to plant a Bt corn hybrid.