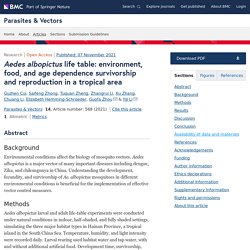 The temperature in indoor (29 °C) settings was significantly higher than that in the shaded (27.2 ºC) and half-shaded (27.6 °C) settings (ANOVA, F(2, 147) = 66.68, P < 0.0001; Tukey HSD, P < 0.05). However, in our indoor environment, we did not use any artificial light source, and thus relied solely on natural light, which resulted in the lowest light intensity in the indoor setting in all experiments (Table 1). INSECTS 04/11/21 Condition-Specific Competitive Effects of the Invasive Mosquito Aedes albopictus on the Resident Culex pipiens among Different Urban Container Habitats May Explain Their Coexistence in the Field. This is an early access version, the complete PDF, HTML, and XML versions will be available soon. 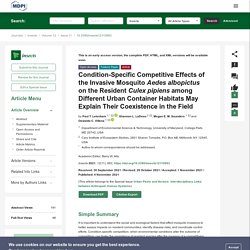 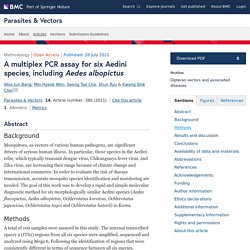 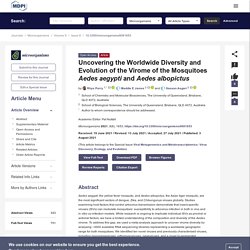 Studies examining host factors that control arbovirus transmission demonstrate that insect-specific viruses (ISVs) can modulate mosquitoes’ susceptibility to arbovirus infection in both in vivo and in vitro co-infection models. While research is ongoing to implicate individual ISVs as proviral or antiviral factors, we have a limited understanding of the composition and diversity of the Aedes virome. To address this gap, we used a meta-analysis approach to uncover virome diversity by analysing ~3000 available RNA sequencing libraries representing a worldwide geographic range for both mosquitoes. INSECTS 11/03/20 Assessment of Lethal, Sublethal, and Transgenerational Effects of Beauveria Bassiana on the Demography of Aedes Albopictus (Culicidae: Diptera) Dengue fever is one of the most rapidly spreading arthropod-borne diseases. 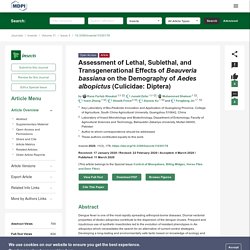 Diurnal vectorial properties of Aedes albopictus contribute to the dispersion of the dengue viruses. Frequent and injudicious use of synthetic insecticides led to the evolution of resistant phenotypes in Ae. albopictus which necessitates the search for an alternative of current control strategies. AMB EXPRESS 21/12/19 Beauveria bassiana for the simultaneous control of Aedes albopictus and Culex pipiens mosquito adults shows high conidia persistence and productivity. Ariee F, Ernst WH, Sijm DT (2001) Natural and synthetic organic compounds in the environment- a symposium report. 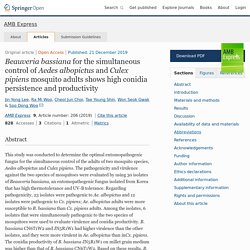 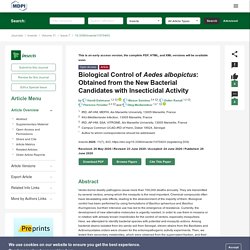 They are transmitted by several vectors, among which the mosquito is the most important. Chemical compounds often have devastating side effects, leading to the abandonment of the majority of them. PATHOGENS 07/04/20 A Systematic Review: Is Aedes albopictus an Efficient Bridge Vector for Zoonotic Arboviruses? 1. 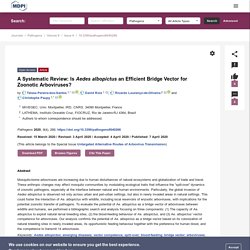 Introduction The human alteration of Earth’s natural systems has become a great concern and a threat to human health. Indeed, these changes are likely to drive most of the global disease burden over the coming century [1]. PLOS 10/03/20 Wolbachia strain wAu efficiently blocks arbovirus transmission in Aedes albopictus. Abstract The global incidence of arboviral diseases transmitted by Aedes mosquitoes, including dengue, chikungunya, yellow fever, and Zika, has increased dramatically in recent decades. 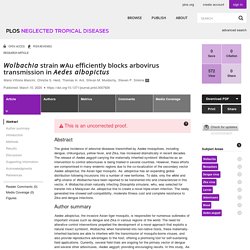 The release of Aedes aegypti carrying the maternally inherited symbiont Wolbachia as an intervention to control arboviruses is being trialled in several countries. However, these efforts are compromised in many endemic regions due to the co-localization of the secondary vector Aedes albopictus, the Asian tiger mosquito. Ae. albopictus has an expanding global distribution following incursions into a number of new territories. PARASITES & VECTORS 28/03/19 Use of mechanical and behavioural methods to eliminate female Aedes aegypti and Aedes albopictus for sterile insect technique and incompatible insect technique applications.

To develop efficient sex separation methods for SIT and IIT programmes, it is essential to evaluate the efficacy and applicability of different approaches such as the use of basic genetic/molecular tools as well as available mechanical and behavioral methods. Genetic sexing strains (GSS) mostly rely on genes conferring insecticide resistance, with the male being heterozygous for resistance due to Y chromosome translocation, while females are homozygous susceptible. However, these strains may have some stability issues [13, 38, 39]. Therefore, more attention has focused on separation of insects through basic mechanical and behavioral methods. On average, male mosquitoes develop to the pupal stage more rapidly than females, a phenomenon called protandry. This has been exploited for Aedes and Culex mosquitoes [40] for sex separation, and could also be considered for other species for which methods are not yet available. 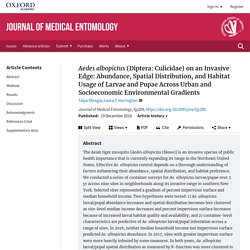 Abstract Despite an increase in dengue outbreaks and the arrival of chikungunya and Zika disease in Panama, studies on the demographic history of the invasive Aedes mosquitoes that are the principle vectors of these diseases are still lacking in this region. Here, we assess the genetic diversity of these mosquitoes in order to decipher their invasion histories into the Isthmus of Panama. DNA sequences from the mitochondrial cytochrome C oxidase I gene obtained from 30 localities in 10 provinces confirmed the presence of more than one mitochondrial haplogroup (i.e., maternal lineage) in each species.

The invasion of Aedes albopictus was likely from temperate European countries, as the most frequent and widespread haplogroup in Panama harbored variants that are uncommon elsewhere in the Americas. Two infrequent and geographically restricted Ae. albopictus haplotypes appear to have subsequently invaded Panama from neighboring Costa Rica and the USA, respectively. Introduction Fig 1. PLOS 19/03/18 Assessment of Aedes albopictus reference genes for quantitative PCR at different stages of development. Abstract Members of the Aedes genus of mosquitoes are widely recognized as vectors of viral diseases. Ae.albopictus is its most invasive species, and are known to carry viruses such as Dengue, Chikugunya and Zika.

PLOS 26/06/17 Peridomestic Aedes malayensis and Aedes albopictus are capable vectors of arboviruses in cities. Abstract Background Dengue and chikungunya are global re-emerging mosquito-borne diseases. In Singapore, sustained vector control coupled with household improvements reduced domestic mosquito populations for the past 45 years, particularly the primary vector Aedes aegypti. However, while disease incidence was low for the first 30 years following vector control implementation, outbreaks have re-emerged in the past 15 years. Epidemiological observations point to the importance of peridomestic infection in areas not targeted by control programs. Methods We carried out entomological surveys to identify the Aedes species present in vegetated sites in highly populated areas and determine whether mosquitoes were present in open-air areas frequented by people. Results. PESTICIDE BIOCHEMISTRY AND PHYSIOLOGY - 2012 - Insecticide resistance in the major dengue vectors Aedes albopictus and Aedes aegypti.

JEV transmission cycle involves mosquitoes and vertebrate hosts. The detection of JEV RNA in a pool of Culex pipiens caught in 2010 in Italy raised the concern of a putative emergence of the virus in Europe. We aimed to study the vector competence of European mosquito populations, such as Cx. pipiens and Aedes albopictus for JEV genotypes 3 and 5. Findings After oral feeding on an infectious blood meal, mosquitoes were dissected at various times post-virus exposure. Conclusions In this study, we demonstrated that European populations of Ae. albopictus and Cx. pipiens were efficient vectors for JEV transmission. J. Med. Entomol. 49(4): 813Ð824 (2012); Larval Mosquito Habitat Utilization and Community Dynamics of Aedes albopictus and Aedes japonicus (Diptera: Culicidae) Parasites & Vectors 2015 8:348 Standard operating procedures for standardized mass rearing of the dengue and chikungunya vectors Aedes aegypti and Aedes albopictus (Diptera: Culicidae) - II - Egg storage and hatching.

Parasites & Vectors 2013, 6:230 (8 August 2013) Functional characterization of three MicroRNAs of the Asian Tiger Mosquito, Aede. UNIVERSITI SAINS MALAYSIA - 2007 - BIONOMICS OF AEDES AEGYPTI AND AEDES ALBOPICTUS IN RELATION TO DENGUE INCIDENCE ON PENANG ISL. BMC Public Health 2012, 12:72 Aedes albopictus and the reemergence of Dengue. EDEN 19/04/12 Interview: ‘auto-dissemination’ for tackling Aedes albopictus. Controlling Aedes albopictus, commonly known as the Asian tiger mosquito, presents particular challenges. An interesting pilot study being conducted in Italy has seen researchers adapt a method which was the subject of experimentation in South America to control Aedes aegypti. The ‘auto-dissemination’ method uses adult mosquitoes to transfer insecticides (juvenile hormone analogues or JHA) to larval habitats (you can read more about the work conducted in Peru in the Proceedings of the National Academy of Sciences of the United States of America . PLOS 29/03/13 Effects of Biogents Sentinel Trap Field Placement on Capture Rates of Adult Asian Tiger Mosquitoes, Aedes albopict.

BGS traps are commonly placed in residential properties during surveillance operations, but locations within properties may have significant differences in ambient light, temperature, and humidity (e.g. between a sunlit lawn and shady underbrush). We examined the effect of BGS trap placement on Ae. albopictus capture rates in three residential properties in Monmouth County, New Jersey, USA. In each property we visually selected locations as shade, partial shade, and sun. Traps in “partial shade” locations were under vegetation and were exposed to filtered sunlight during some parts of the day while “shaded” locations were never exposed to direct sunlight.

Askew Skuse, was the first to describe scientifically the Asian tiger mosquito, which he named Culex albopictus (lat. Culex “gnat, midge” and albopictus “white embroided”).[4][5] Later, the species was assigned to the genus Aedes (gr. άηδής, "unpleasant")[6] and referred to as Aedes albopictus.[7] Like the yellow fever mosquito, it belongs to the subgenus Stegomyia (Gr. στέγος, "covered, roofed", referring to the scales that completely cover the dorsal surface in this Subgenus, and μυία, "fly") within the Aedes genus.[8] In 2004, scientists explored higher-level relationships and proposed a new classification within the Aedes genus and Stegomyia was elevated to the Genus level, making Aedes albopictus now Stegomyia albopicta.