PARASITES & VECTORS 12/05/16 Possibilities and challenges for developing a successful vaccine for leishmaniasis. One of the most important aspects of Leishmania spp. infection is the ability of these parasites to evade and sabotage host immune responses. 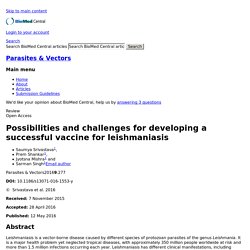 These characteristics also allow the parasite to persist and establish chronic infection. The protective immune response to Leishmania infection is predominantly cell-mediated immunity. The Th1 type immune response correlates with resistance, whereas Th2 response is associated with susceptibility to infection [9]. However, several factors influence resistance or susceptibility to leishmaniasis including genetic variation of the host, genetic variation of the parasites between species and strains, and chance factors such as the location, inoculum size and number of infective bites received by the host [10]. However, two major antigen presenting cells (APCs) which could be macrophages and/or dendritic cells (DCs) play critical roles in mediating the resistance and susceptibility during Leishmania infection. 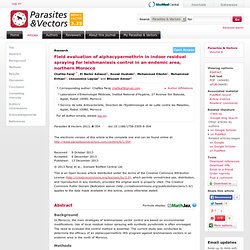 The localities were chosen because they had similar topographical and epidemiological characteristics. The region is mountainous, with altitudes ranging from 900 to 1100 m. These localities have essentially a semi arid climate. There is rain from November to April. The inhabitants of the four localities are, mainly farmers and breeders. Epidemiological data Leishmaniasis incidence was measured by passive and active case detection in each study area. Taking into account the seasonality and the transmission period in Morocco, we used an epidemiological year (July to June) for epidemiological data. Insecticide spraying Entomological data Sand fly sampling Insecticide persistence Sand fly susceptibility to pyrethroids Data analysis Data were analyzed using Genstat (15th edition). PARASITES AND VECTORS 04/11/13 Studies on the sand fly fauna (Diptera: Psychodidae) in high-transmission areas of cutaneous leishmaniasis in the Republic of Suriname.

Parasites & Vectors 2011, 4:86 (20 May 2011) LeishVet guidelines for the practical management of canine leishmaniosis. Parasites & Vectors 02/03/10 Simplified molecular detection of Leishmania parasites in various clinical samples from patients w. Cultured parasites Promastigotes of L. donovani (MHOM/SD/68/1S) were cultured in vitro as previously described [7] and the parasites were reconstituted into 106 parasites per ml aliquots in phosphate buffered saline (PBS). 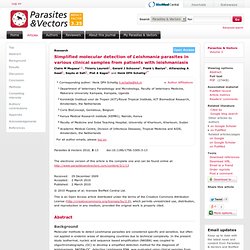 Ten-fold serial dilutions of the culture were made (105, 104, 103, 102, 101, and 1 parasites per ml) in triplicate. Similarly, the same serial dilutions of parasites were used to seed EDTA-supplemented blood from a non-endemic healthy volunteer with the same parasite numbers. Nucleic acid from other cultured pathogens, i.e., Mycobacterium tuberculosis, Plasmodium falciparum, Brucella abortus, Salmonella typhi, T. b. gambiense, and T. b. rhodesiense, were obtained from other research groups and included in this study to assess analytical specificity of the NASBA-OC test Clinical samples Clinical samples obtained from different study locations were used in the present study. Clinical samples of visceral leishmaniasis patients Endemic controls Detection by oligochromatography.

Visceral leishmaniasis (VL) is a chronic and frequently lethal disease caused by protozoan parasites of the L. donovani complex, order Kinetoplastida. The aetiological agents are: L. donovani in India and Central Africa and L. infantum in the Americas, the Middle East, Central Asia, China and the Mediterranean. The human disease is lethal if not treated early after the onset of clinicopathological abnormalities that include: malaise, anaemia, cachexia, hypergammaglobulinaemia, hepato-splenomegaly and progressive suppression of the cellular immune response.

L. donovani complex species are intracellular parasites of macrophages of lymphoid organs such as the spleen, lymph nodes, bone marrow and liver. Their biological cycle alternates between the amastigote form in the vertebrate host and the promastigote form in the gut of the sandfly vector. Several species of vertebrate mammals may be infected naturally with Leishmania.