MICROORGANISMS 02/07/21 Current Epidemiological Characteristics of Imported Malaria, Vector Control Status and Malaria Elimination Prospects in the Gulf Cooperation Council (GCC) Countries. MALAR J. 10/04/20 Indoor residual spraying for malaria control in sub-Saharan Africa 1997 to 2017: an adjusted retrospective analysis. Overview IRS coverage for the 46 malaria-endemic sub-Saharan African countries was calculated for the years from 1997 to 2017 at the most spatially disaggregated level possible, which ranged from local authority (sub-district) to country level data. 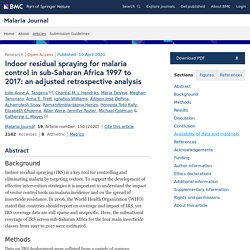 The data obtained encompassed a range of measurement types that were adjusted to one standard unit of measurement: the proportion of households sprayed. Data sources Data on IRS campaigns were collected using reports from National Malaria Control Programmes, Ministries of Health, the President’s Malaria Initiative (PMI), WHO, and other stakeholders (Table 2).

Data on IRS campaigns managed by PMI from 2012 to 2017 were shared by Abt Associates. Authors of reports and scientific publications who were based at or worked with the National Malaria Control Programmes (NMCPs) were contacted. Data is presented for 951 country-years. Linking IRS data to administrative divisions IRS data adjustments Using the number of households sprayed. PASTEUR 28/02/19 New research sugests earlier emergence of Malaria in Africa. International Journal for Parasitology Volume 47, Issues 2–3, February 2017, Out of Africa: origins and evolution of the human malaria parasites Plasmodium falciparum and Plasmodium vivax. <div class="msgBox" style="margin-top:10px;"><span class="errMsg"><div>JavaScript is disabled on your browser. 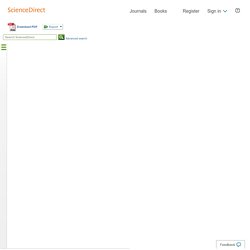 Please enable JavaScript to use all the features on this page. This page uses JavaScript to progressively load the article content as a user scrolls. Click the View full text link to bypass dynamically loaded article content. <a rel="nofollow" href=" full text</a></div></span></div><br /> PLOS 16/10/14 Impact of Schistosoma mansoni on Malaria Transmission in Sub-Saharan Africa. Abstract Background Sub-Saharan Africa harbors the majority of the global burden of malaria and schistosomiasis infections. 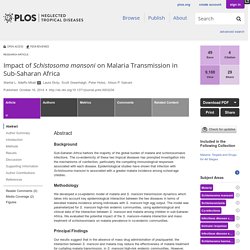 The co-endemicity of these two tropical diseases has prompted investigation into the mechanisms of coinfection, particularly the competing immunological responses associated with each disease. Epidemiological studies have shown that infection with Schistosoma mansoni is associated with a greater malaria incidence among school-age children. MALARIA JOURNAL 08/04/16 Malaria vector populations across ecological zones in Guinea Conakry and Mali, West Africa. Mosquito collections Mosquitoes were collected from four different study sites at the border with Mali and in Guinea Conakry (Fig. 1). 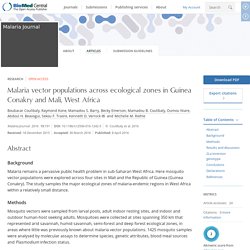 Takan (N 11.47, W 8.33) and Toumani Oulena (N 10.83, W 7.81) are both small villages in the Yanfolila district of southern Mali and represent the Sudanian savannah ecological zone. Takan is arid savannah, while Toumani Oulena is humid savannah. In Guinea Conakry, we sampled in Koraboh, (N 9.28, W 10.03) a small village in the Kissidougou district in the Faranah region representing a semi-forest site with intermediate ecology, a mix of savannah and forest, and in Koundara, (N 8.48, W 9.53), a small village in the Macenta district in the Zezekore region representing deep forest ecology.

All molecular attribute data for mosquitoes is available (Additional file 1). NATURE 16/09/15 The effect of malaria control on Plasmodium falciparum in Africa between 2000 and 2015. Parasites & Vectors 2013, 6:311 Temporal and micro-spatial heterogeneity in the distribution of Anopheles vectors of malaria along the Kenyan coast. J Trop Dis 07/09/13 Knowledge, Attitude and Practice of the Community towards Malaria Prevention and Control Options in Anti-Malaria Association Intervention Zones of Amahara National Regional State, Ethiopia.

J Vector Borne Dis 51, June 2014, pp. 119–127 Knowledge, attitudes and practices of malaria control among communities from the health district of Forécariah in the Republic of Guinea, West Africa. Malaria Research and Treatment Volume 2014 (2014), Assessment of Risk Factors Associated with Malaria Transmission in Tubu Village, Northern Botswana. MALARIA JOURNAL 11/11/10 Malaria transmission and insecticide resistance of Anopheles gambiae in Libreville and Port-Gentil, Gabon. European Journal of Business and Management - 2011 - Economic Burden of Malaria in six Countries of Africa. Economic burden studies are important for use in advocating with Ministries of Finance and donors for increased investments in public health problems such as malaria. 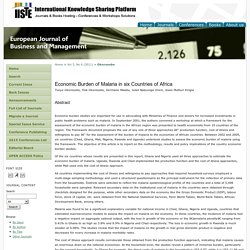 The objective of this article is to report on the methodology, results and policy implications of the country economic burden studies. Iran J Arthropod-Borne Dis, 2010, 4(2): 61–67 Malaria Situation and Anopheline Mosquitoes in Qom Province, Central Iran. LONDON SCHOOL OF HYGIENE & TROPICAL MEDICINE 29/08/13 Targeting mosquito breeding sites could boost malaria control efforts in A. A malaria control method that targets mosquito larvae and pupae as they mature in standing water could be an important supplementary measure in the fight against the disease, according to a new report. 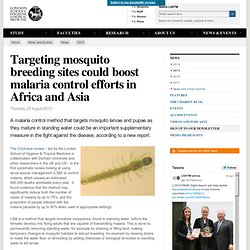 The Cochrane review – led by the London School of Hygiene & Tropical Medicine in collaboration with Durham University and other researchers in the UK and US – is the first systematic review looking at using larval source management (LSM) to control malaria, which causes an estimated 660,000 deaths worldwide every year. It found evidence that the method may significantly reduce both the number of cases of malaria by up to 75%, and the proportion of people infected with the malaria parasite by up to 90% when used in appropriate settings. LSM is a method that targets immature mosquitoes, found in standing water, before the females develop into flying adults that are capable of transmitting malaria. 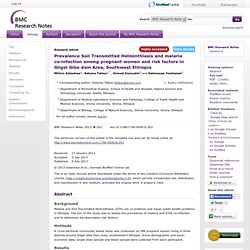 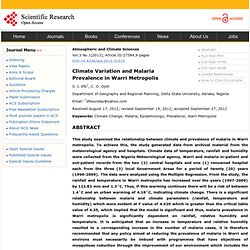 I. Efe*, C. O. PLOS 18/07/13 Landscape Movements of Anopheles gambiae Malaria Vector Mosquitoes in Rural Gambia. Background For malaria control in Africa it is crucial to characterise the dispersal of its most efficient vector, Anopheles gambiae, in order to target interventions and assess their impact spatially. 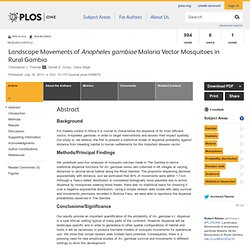 Our study is, we believe, the first to present a statistical model of dispersal probability against distance from breeding habitat to human settlements for this important disease vector. Methods/Principal Findings We undertook post-hoc analyses of mosquito catches made in The Gambia to derive statistical dispersal functions for An. gambiae sensu lato collected in 48 villages at varying distances to alluvial larval habitat along the River Gambia. The proportion dispersing declined exponentially with distance, and we estimated that 90% of movements were within 1.7 km. Conclusions/Significance Our results provide an important quantification of the probability of An. gambiae s.l. dispersal in a rural African setting typical of many parts of the continent. Malaria Journal 2013, 12:63 Spatio-temporal malaria transmission patterns in Navrongo demographic surveillance site, northern Gh. 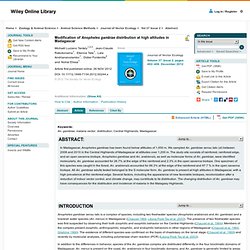 We sampled An. gambiae sensu lato (sl) between 2008 and 2010 in the Central Highlands of Madagascar at altitudes over 1,200 m. Malaria Research and Treatment - Volume 2011 (2011) - Mapping Malaria Transmission Risk in Northern Morocco Using Entomological. Int. J. Environ. Res. Public Health 2011, 8, 913-930 Climate Change and Vector-borne Diseases: An Economic Impact Analysis of Ma. UNIVERSITY OF PRETORIA - 2010 - Thèse en ligne : The burden of imported malaria in Gauteng Province. GRIDA - In the Grip of Malaria in Africa. The GRID-Arendal Maps & Graphics Library is an on-going project to collect and catalogue all graphic products that have been prepared for publications and web-sites from the last 15 years in a wide range of themes related to environment and sustainable development.

There are currently 3022 graphics available in the database. Urban growth rate in Africa Africa’s urban centres are currently growing at an annual rate that is the fastest compared to other regions. The urban expansion is expected to continue, with cities like Abuja and Ouagadougou expecting very high growth in the next decade, while Cairo, Africa’s largest city, is projected to see a comparatively lower growth rate. PARASITES AND VECTORS DEC 2009 Distribution, host preference and infection rates of malaria vectors in Mauritania. Parasites & Vectors 2011, 4:232 (13 December 2011) Integrated prevalence mapping of schistosomiasis, soil-transmitted helminthia.

Treatment availability and capacity building Uganda's National Control Programme for combating intestinal schistosomiasis and STHs has been active since 2003, and although regular monitoring has occurred at intervals since then, this is the first comprehensive overview of the status of treatment infrastructure and health capacity on the districts adjacent to Lake Victoria. The results here paint a mixed picture; on the one hand, some villages appear to function well in terms of drug availability, regular training of CMDs and administration of mass treatment.

However, there were also locations, such as much of Wakiso district islands, where people were sceptical about the efficacy or need to take PZQ, while in Masaka district there was a noticeable absence of volunteers willing to take on the role of CMD. The reasons given for refusal included the distance between sites and the lack of adequate funding for travel.

INTECH - FEV 2012 - ITrends in Insecticide Resistance in Natural Populations of Malaria Vectors in Burkina Faso, West Africa: 10. INTECH - MARS 2012 - Au sommaire:Effects of Irrigated Rice Fields and Seasonality on Plasmodium Transmission in West Africa, Par. Edited by Alfonso J. Rodriguez-Morales, ISBN 978-953-51-0274-8, 576 pages, Publisher: InTech, Chapters published March 16, 2012 under CC BY 3.0 licenseDOI: 10.5772/1335 Edited Volume Tropical Medicine has emerged and remained as an important discipline for the study of diseases endemic in the tropic, particularly those of infectious etiology. Emergence and reemergence of many tropical pathologies have recently aroused the interest of many fields of the study of tropical medicine, even including new infectious agents. Then evidence-based information in the field and regular updates are necessary.