Introduction The occurrence of natural toxins in the surface and drinking water reservoirs is a problem of increasing concern for water producers and environmental scientists. 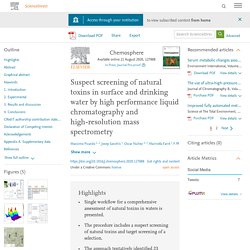 Natural toxins are secondary metabolites produced by a multitude of organisms and especially by fungi (fungal toxins or mycotoxins), plants (phytotoxins), bacteria and algae. Natural toxins are naturally synthesized by living organisms and it has been hypothesised that defence or predation mechanisms can be some of the factors ruling their production [1]. The release of natural toxins into the environment, and in particular their occurrence in surface waters, can constitute a hazard for human health due of possible ingestion and/or recreational and bathing activities [2,3]. Several legislations have been implemented around the world. 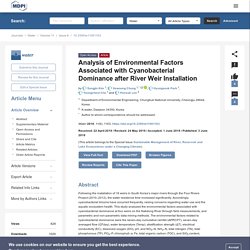 Accordingly, cyanobacterial blooms have occurred frequently, raising concerns regarding water use and the aquatic ecosystem health. This study analyzed the environmental factors associated with cyanobacterial dominance at four weirs on the Nakdong River through field measurements, and parametric and non-parametric data mining methods. TOXINS 26/07/19 Characterization of Cyanophages in Lake Erie: Interaction Mechanisms and Structural Damage of Toxic Cyanobacteria. Cyanophages are abundant in aquatic environments and play a critical role in bloom dynamics, including regulation of cyanobacteria growth and photosynthesis. 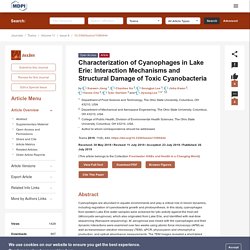 ROBERT GORDON UNIVERSITY (Aberdeen) - 1999 - Thèse en ligne: Purification, detection and biological effects of cyanobacterial toxins. Abstract The aesthetic beauty of a landscape is a very subjective issue: every person has their own opinions and their own idea of what beauty is. 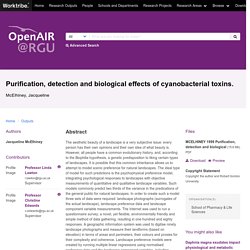 However, all people have a common evolutionary history, and, according to the Biophilia hypothesis, a genetic predisposition to liking certain types of landscapes. It is possible that this common inheritance allows us to attempt to model scenic preference for natural landscapes. The ideal type of model for such predictions is the psychophysical preference model, integrating psychological responses to landscapes with objective measurements of quantitative and qualitative landscape variables. 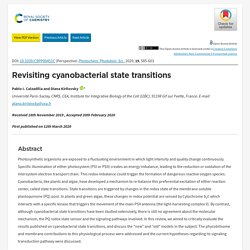 Specific illumination of either photosystem (PSI or PSII) creates an energy imbalance, leading to the reduction or oxidation of the intersystem electron transport chain. This redox imbalance could trigger the formation of dangerous reactive oxygen species. Cyanobacteria, like plants and algae, have developed a mechanism to re-balance this preferential excitation of either reaction center, called state transitions. 1. Light is essential for photosynthetic organisms that harvest solar energy and convert it into chemical energy (ATP) and reducing power (NADPH). In order to efficiently use the incoming light and to avoid damage, sensing and adapting to environmental changes becomes crucial. NEW HAVEN REGISTER 19/05/20 Grant to help study blue-green algae in Candlewood. Edwin Wong, a biology professor at Western Connecticut State University, takes a sample of water from the beach at Lynn Demning Park in New Milford, Thursday, July 21, 2016. 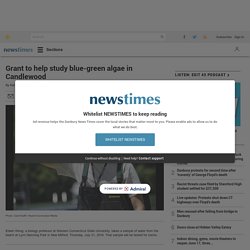 That sample will be tested for toxins. less. INTECH 06/07/19 Mechanisms of Cyanotoxin Toxicity—Carcinogenicity, Anticancer Potential, and Clinical Toxicology. 1. 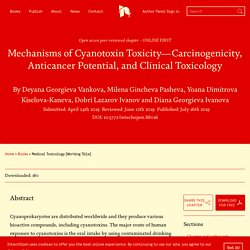 Introduction Cyanoprokaryotes are Gram-negative photosynthetic algae considered to have arisen approximately 3.5 billion years ago [1]. In nature, they are found as single cell species or as colonies rapidly growing in fresh water, all types of aquatic ecosystems, and terrestrial habitats. Cyanobacteria are photosynthetic organisms, and as such, they are considered primary first-level consumers in the food chains in water ecosystems.

Blue-green algae play an important role in carbon and nitrogen balance in the biosphere [2]. More than 90 microcystin isoforms, that are cyclic peptide cyanotoxins, have been described. Cyanotoxins have various chemical structures; thus, their toxic effects are due to different mechanisms. Along with the reports about the toxicity of cyanobacteria metabolites, there are studies describing their anticancer properties, hence, viewing them from a new perspective as novel potential sources for anticancer drug development [19]. 2. 3. 3.1. INTECH 03/04/19 An Overview of Cyanobacteria Harmful Algal Bloom (CyanoHAB) Issues in Freshwater Ecosystems. 2.1. 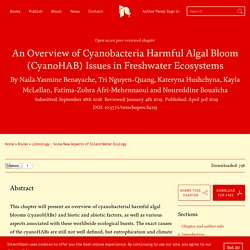 Abiotic factors Among the abiotic factors, nutrients, including inorganic nitrogen (N) and phosphorus (P), temperature, and light intensity, and hydrodynamic parameters of the water body (turbidity and residue time) have been reported as the most important factors in the proliferation of cyanobacteria [2, 4, 6]. The availability of nutrients such as N and P is essential for the growth of cyanobacteria. For example, field experiments by monitoring surveys of phytoplankton for 3 years (2012–2014) in Lake Erie (U.S.A.) showed that inter-annual differences in the duration, intensity, and toxicity of cyanobacterial blooms in this area were considered related to in-lake and tributary nutrient (N and P) concentrations [2]. 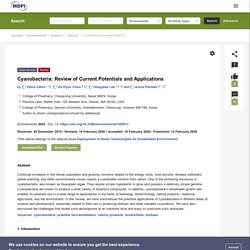 Growing concerns over energy crisis, food security, disease outbreaks, global warming, and other environmental concerns require a solution that is economically viable, sustainable, as well as feasible [1]. Cyanobacteria are known to be the first oxygenic photosynthetic microorganisms on Earth and have contributed to oxygen production in the Earth’s atmosphere over the past 3 billion years [2]. Environmental Sciences Europe volume 21/05/19 Effects of cyanobacterial toxins on the human gastrointestinal tract and the mucosal innate immune system. Climate change is transforming ecosystems and their composition all over the planet. 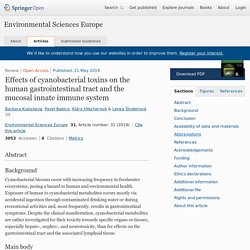 Among others, temperate climates in the northern hemisphere are experiencing longer and more intense heat periods in summer and increasing CO2 levels are saturating surface waters with dissolved carbonate. Applied Microbiology and Biotechnology 27/04/19 Role of cyanobacteria in agricultural and industrial sectors: an outlook on economically important byproducts. Abed RMM, Dobretsov S, Sudesh K (2009) Applications of cyanobacteria in biotechnology.

WATER 31/05/20 Control of Nuisance Cyanobacteria in Drinking Water Resources Using Alternative Algae-Blocking Mats. The water intake facility of Paldangho Lake (PIF), constructed in 1988, supplies drinking water to the Seoul metropolitan area and satellite city (ca. 20 million inhabitants) in South Korea. A nuisance cyanobacterial bloom (CB) has been observed every year in the PIF. Thus, related governments have been funding the control of CBs and algal-originated materials (AOMs). In this study, an algae-blocking mat (ABM) was developed to protect against CBs and AOMs considering temperature and water depth. WATER 03/06/20 Effects of Harmful Blooms of Large-Sized and Colonial Cyanobacteria on Aquatic Food Webs.

Cyanobacterial blooms are the most important and best studied type of harmful algal blooms in fresh waters and brackish coastal seas. We here review how and to which extent they resist grazing by zooplankton, how zooplankton responds to cyanobacterial blooms and how these effects are further transmitted to fish. Size, toxicity and poor nutritional value are widespread mechanisms of grazing defense by cyanobacteria. In some cases, defenses are inducible, in some they are obligate. However, to some extent zooplankton overcome grazing resistance, partly after evolutionary adaptation. Cyanotoxins are also harmful to fish and may cause fish kills. This is an open access article distributed under the Creative Commons Attribution License which permits unrestricted use, distribution, and reproduction in any medium, provided the original work is properly cited. h2o monitoring VIA YOUTUBE 16/12/19 Nowcast for Fecal Contamination or Cyanobacterial Harmful Algal Blooms.

Introduction The human population of our planet is projected to reach ~9.7 billion by 2050, and majority of this increased population would be contributed by developing countries of Asia and Africa (DESA UN, 2015). This increase in global population is associated with increased demand of food security in future. To overcome this challenge, the World Health Organization has suggested a doubling of food production by 2050, while the United Nations have suggested a 50% increase in global food production by 2030.

The productivity gains resulted from the “Green Revolution” have essentially reached a plateau, and feeding the increased global population is further challenged by limited availability of agriculture land. The range of non-conventional biotechnological measures involving improvement in CO2 fixation efficiency of crop plants can be used to enhance the food productivity per hectare of agricultural land (Parry and Hawkesford, 2010; Parry et al., 2011). Figure 1. Table 1. WHOI_EDU - Frequently Asked Questions - HARMFUL ALGAE.

What are HABs (Harmful Algal Blooms)? Among the thousands of species of microscopic algae at the base of the marine food chain are a few dozen which produce potent toxins. Water Research Volume 159, 1 August 2019, Removal efficiency of phosphorus, cyanobacteria and cyanotoxins by the “flock & sink” mitigation technique in semi-arid eutrophic waters. WAGENINGEN UNIVERSITY 29/08/18 Rainfall after drought causes explosion of cyanobacteria populations. After months of drought and an increasing deterioration of the water quality due to cyanobacteria, rainfall on 9 August finally brought some relief. However, the rainfall also washed fertiliser into the surface water. In research that they have been conducting since 2010, the researchers investigated the effects of this scenario.

MICHIGAN STATE UNIVERSITY 02/04/19 Our first look at a new light absorbing protein in cyanobacteria. LIFE 10/05/19 Developmental Biology in Cyanobacteria. Filamentous, heterocyst-forming cyanobacteria are phototrophic multicellular organisms in which N2-fixing heterocysts and CO2-fixing vegetative cells exchange regulators and nutrients. Upon nitrogen deprivation (perceived as an increase in the cellular C to N ratio), vegetative cells differentiate into heterocysts in a process that involves a specific program of gene expression and results in a heterocyst pattern consisting of two heterocysts separated by about 10 to 15 vegetative cells.

Cyanobacteria can efficiently harvest CO2 as a carbon source, powering their metabolic processes by absorption of sunlight, the most abundant form of renewable energy. ERR_EE 13/07/18 Toxic cyanobacteria spreading at multiple Tallinn beaches. Analyses conducted by the Estonian Marine Institute indicated that the concentration of cyanobacteria was highest at Pirita Beach, but also exceeded permitted levels at Pikakari, Kakumäe and Stroomi Beach as well. These beaches are currently flying yellow flags, indicating that swimming there is at one's own risk.

Every swimmer can visually assess the situation for themselves before heading into the water. ERR_EE 10/07/18 Potentially toxic algal blooms detected at Tallinn's Pirita Beach. CELL REPORTS 09/10/18 Growth of Cyanobacteria Is Constrained by the Abundance of Light and Carbon Assimilation Proteins. Brazilian Journal of Botany December 2018, Volume 41, Issue 4, Cyanobacteria from a Brazilian subtropical freshwater water body.

Science of The Total Environment Volume 609, 31 December 2017, The profound effect of harmful cyanobacterial blooms: From food-web and management perspectives. JavaScript is disabled on your browser. Please enable JavaScript to use all the features on this page. Highlights The ‘bathing water profile’ does not reflect the toxicological potential of HABs. Oxford University - 2017 - Cyanobacteria vs green algae: which group has the edge?

Cosmetics 2017, 4(4), 46; The Potential Use of Marine Microalgae and Cyanobacteria in Cosmetics and Thalassotherapy. ADVANCES IN OCEANOGRAPHY AND LIMNOLOGY - 2017 - Handbook of Cyanobacterial Monitoring and Cyanotoxin Analysis. BRAZILIAN JOURNAL OF MEDICAL AND BIOLOGICAL RESEARCH - 1999 - Cyanobacterial toxins in Portugal: effects on aquatic animals and risk for human health. Aquat Toxicol. 2017 Sep;190:133-141. The paralytic shellfish toxin, saxitoxin, enters the cytoplasm and induces apoptosis of oyster immune cells through a caspase-dependent pathway.