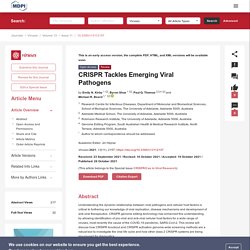 No special permission is required to reuse all or part of the article published by MDPI, including figures and tables. For articles published under an open access Creative Common CC BY license, any part of the article may be reused without permission provided that the original article is clearly cited. Feature Papers represent the most advanced research with significant potential for high impact in the field.

Feature Papers are submitted upon individual invitation or recommendation by the scientific editors and undergo peer review prior to publication. The Feature Paper can be either an original research article, a substantial novel research study that often involves several techniques or approaches, or a comprehensive review paper with concise and precise updates on the latest progress in the field that systematically reviews the most exciting advances in scientific literature. AMERICAN SOCIETY FOR MICROBIOLOGY 17/08/21 Hidden Viral Sequences in Public Sequencing Data and Warning for Future Emerging Diseases.

RNA viruses have caused numerous emerging diseases; for example, it has been reported that 94% of zoonoses from 1990 to 2010 were caused by RNA viruses (1). 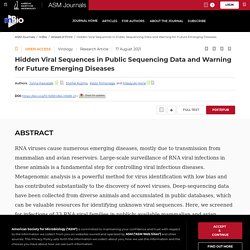 Mammalian and avian species are especially high-risk transmission sources for zoonotic viruses because of their frequent contact with humans as livestock, bushmeat, companion, or laboratory animals (2). Additionally, the spread of viral infectious diseases in livestock animals impacts sustainable food security and economic growth (3). Thus, large-scale surveillance of RNA viral infections in these animals would help monitor infections of known and unknown viruses that can cause outbreaks in humans and domestic animals. Metagenomic analysis can identify viruses with low bias and has contributed substantially to elucidating virus diversity for more than a decade (4). 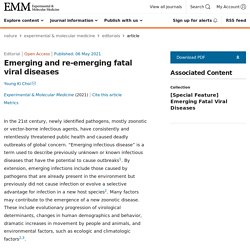 “Emerging infectious disease” is a term used to describe previously unknown or known infectious diseases that have the potential to cause outbreaks1. By extension, emerging infections include those caused by pathogens that are already present in the environment but previously did not cause infection or evolve a selective advantage for infection in a new host species2. Many factors may contribute to the emergence of a new zoonotic disease.

These include evolutionary progression of virological determinants, changes in human demographics and behavior, dramatic increases in movement by people and animals, and environmental factors, such as ecologic and climatologic factors2,3. Humans are equipped with elaborate immune mechanisms to protect against harmful invading pathogens. References. VIRUSES 08/04/21 Mitigating Future Respiratory Virus Pandemics: New Threats and Approaches to Consider. Despite many recent efforts to predict and control emerging infectious disease threats to humans, we failed to anticipate the zoonotic viruses which led to pandemics in 2009 and 2020. 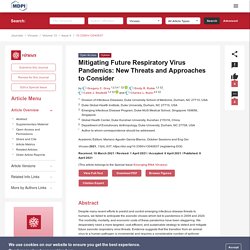 The morbidity, mortality, and economic costs of these pandemics have been staggering. We desperately need a more targeted, cost-efficient, and sustainable strategy to detect and mitigate future zoonotic respiratory virus threats. Evidence suggests that the transition from an animal virus to a human pathogen is incremental and requires a considerable number of spillover events and considerable time before a pandemic variant emerges. 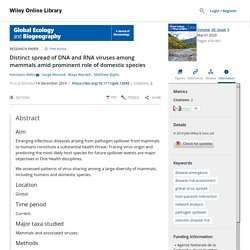 Understanding the factors that enable or facilitate these processes is a crucial step for such events to be predicted. Host shifting, that is the colonization of a new host species by a pathogen, requires a certain level of overlap in species traits (“ecological fitting”) in order to overcome barriers of cross‐species transmission and for survival and reproduction within novel host species (Agosta, Janz, & Brooks, 2010; Parrish et al., 2008; Woolhouse, Haydon, & Antia, 2005). Nevertheless, despite important advances in virus discovery and analytical approaches, our understanding of virus sharing and their spread through entire networks of mammalian host species remains limited. 2.1 Virus–host data 2.2 Mammalian host phylogeny and ecological trait data 2.3 Statistical analysis. 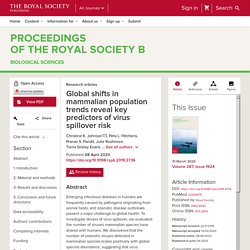 Introduction Infectious diseases that originate from animals and infect people comprise the majority of recurrent and emerging infectious disease threats and are widely considered to be one of the greatest challenges facing public health [1–3]. Characterization of pathogen transmission events from wildlife to humans remains an important scientific challenge hampered by pathogen detection limitations in wild species. Disease spillover is probably vastly under-reported, particularly in remote regions where people have limited access to healthcare. Zoonotic disease spillover events are also difficult to detect, especially if the disease spectrum includes mild or non-specific symptoms, or if there is limited to no human-to-human transmission. WIKIPEDIA - List of biosafety level 4 organisms. List of organisms that require handling with the most severe protocol Biosafety level 4 laboratories are used for diagnostic work and research on easily transmitted pathogens which can cause fatal disease. 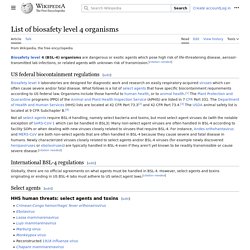 What follows is a list of organisms that require handling with the most severe protocol. Organisms include those harmful to human health, to animal health, or to plant health.[1] The Plant Protection and Quarantine programs (PPQ) of the Animal and Plant Health Inspection Service (APHIS) are listed in 7 CFR Part 331. The Department of Health and Human Services (HHS) lists are located at 42 CFR Part 73.3[2] and 42 CFR Part 73.4.[3] The USDA animal safety list is located at 9 CFR Subchapter B.[4] Select agents[edit] HHS human threats: select agents and toxins[edit] WIKIPEDIA - Emergent virus. Virus that has recently displayed increased pathogenicity or contagion, or has appeared in a new host species left no distinct epidemiological cluescould not be isolated or propagated in culture Zoonosis[edit] Zoonosis – i.e. the spread of infectious disease from animals to humans – is estimated to account for 6 out of 10 infectious diseases in humans. 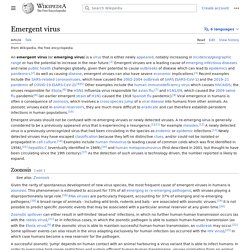 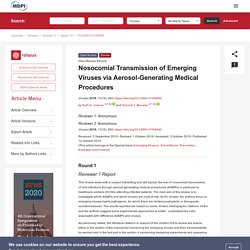 The main aim of this review is to investigate which AGMPs and which viruses are most at risk. As for viruses, the authors focus on emerging viruses highly pathogenic, for which there are limited prophylactic or therapeutic countermeasures. VIRUSES - MARS 2020 - Special Issue "Emerging Viruses: Surveillance, Prevention, Evolution and Control"- Deadline for manuscript submissions: 15 September 2020. Dear Colleagues, Emerging viruses represent a major concern for public health offices. 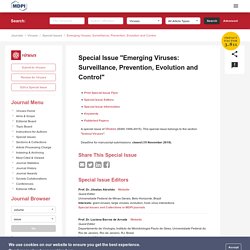 Climate changes, the international migration of people and products, deforestation, and other anthropogenic activities (and their consequences) seem to be closely related to the emerging of new viruses, triggering an increasing number of notified outbreaks, epidemics, and pandemics. In this Special Issue, we encourage colleagues to submit manuscripts related to the surveillance, detection, and evolution of emerging viruses, describing from local outbreaks to worldwide viral pandemics. Neurological Research and Practice 11/06/19 Emerging and re-emerging viruses affecting the nervous system. The increased trade, travel habits, urbanization and climate change are some of the factors, which favour evolution and spread of new pathogens.

Infectious diseases are emerging or re-emerging every year. Neuroinfectious diseases may occur as outbreaks in small localized regions or may spread rapidly over large geographical areas. An epidemic occurs when an infectious disease spreads rapidly to many people like the Zika Virus outbreak. A pandemic is a global disease outbreak as seen e.g. in HIV/AIDS. MICROORGANISMS - Special Issue "Recent Advances in Antivirals for Emerging Viruses" - Deadline for manuscript submissions: 31 October 2020.

Emerging viruses should be considered to occur when there are changes in the relationship between the agent, the host and the enviroment. Review Articles. BIORXIV 20/03/20 Scientometric Trends for Coronaviruses and Other Emerging Viral Infections. VIRUSES - MARS 2020 - Special Issue "Emerging Viruses: Surveillance, Prevention, Evolution and Control" Health Sciences: An Open Access Peer Reviewed E-Journal. 2012 PRIORITIES AND FUTURE OF DIAGNOSIS OF EMERGING VIRAL DISEASES.

INTECH - JANV 2020 - The Emerging Challenges in Transmission and Detection of Filovirus Infections in Developing Countries. 1. Introduction The filovirus infections are emerging new infections, which pose serious public health threats of global dimensions. This filovirus family comprises mainly of the Ebola virus and the Marburg virus. Some five species of Ebola have been confirmed and includes the Zaire Ebola virus (EBOV), the Sudan subtype (SUDV), the Bundibugyo virus (BDBV), the Tai Forest virus (TAFV), and the Reston virus (RESTV) [1, 2].

Most of the outbreaks have been caused by EBOV and SUDV infections. The Marburg virus was first isolated in 1967 when laboratory workers in Marburg, Germany and Yugoslavia were infected when exposed to imported green monkeys from Uganda [4, 5]. The Ebola virus was first identified in 1976 in a major outbreak in 1976. The aim of this chapter is to review the current knowledge on filoviruses as emerging infections based on published literature with a focus on Ebola and Marburg virus infections and outbreaks. 2. 3. 4. 5. 6. RESPIROLOGY 15/04/19 Emerging respiratory infections threatening public health in the Asia‐Pacific region: A position paper of the Asian Pacific Society of Respirology. Emerging infectious diseases such as severe acute respiratory syndrome (SARS), Middle East respiratory syndrome (MERS), pandemic influenza A(H1N1) 2009 (influenza A(H1N1)pdm09) and avian influenza (AI) pose a threat to global health.

Bird and swine influenza viruses continuously obtain new gene segments through reassortment with human strains. Moreover, infections by multidrug‐resistant Gram‐negative bacteria are also increasing worldwide. Hence, action is needed to curtail the dissemination of these organisms. For this position paper, members of the Asian Pacific Society of Respirology (APSR) Respiratory Infections Assembly selected respiratory pathogens that are most likely to pose significant threats to humans, particularly in the Asia‐Pacific region.

The members reviewed epidemiological features of the pathogens and put together a consensus opinion. THE JOURNAL OF TRANSLATIONAL IMMUNOLOGY 16/04/19 Vaccines for emerging pathogens: from research to the clinic. Historically, vaccines have had enormous impact on human health, eradicating smallpox, polio and many other childhood and adult infections of public health concern. CLINICAL & EXPERIMENTAL IMMUNOLOGY 16/04/19 Emerging viruses and current strategies for vaccine intervention. Tiho-hannover_de - 2018 - Thèse en ligne : Emerging and Re-emerging Viruses in Animals : Evolutionary Inferences and Molecular Characterization. NATURE 05/10/18 Generation of therapeutic antisera for emerging viral infections.