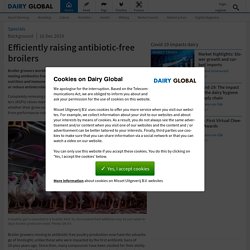 Promoting intestinal health through improved nutrition and immune system stimulation can help producers successfully replace or reduce antimicrobials without sacrificing bird health or performance. Completely removing or significantly reducing the use of antibiotic growth promoters (AGPs) raises many issues for broiler producers. Their foremost concerns are whether their grow-out operations can remain competitive, profitable and free from performance-robbing intestinal diseases like necrotic enteritis. A healthy gut is essential to a healthy bird. So, formulated feed additives may be just what today’s broiler producers need. Broiler growers moving to antibiotic-free poultry production now have the advantage of hindsight, unlike those who were impacted by the first antibiotic bans of 20-plus years ago. Intestinal health is critical A healthy gut is essential to a healthy bird. 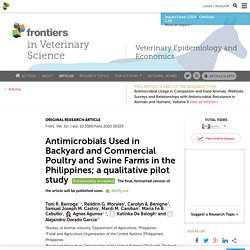 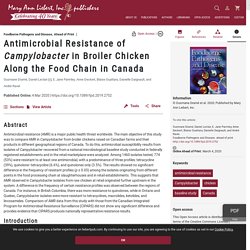 At the World Health Assembly in May 2014, the member states of the World Health Organization (WHO) supported a resolution emphasizing the urgent need for a global action plan on AMR (WHO, 2015). As a participant in the global fight against AMR, Canada also developed a new framework for action to face this challenge (PHAC, 2017). Enteritis caused by Campylobacter is the second most common bacterial foodborne disease in Canada, with an estimated incidence of 447 cases per 100,000 person-years (Thomas et al., 2013). Sanità Pubblica Veterinaria: Numero 112, Febbraio 2019 Evaluation of the distribution of Campylobacter spp. in broilers at the slaughterhouse, molecular typing of isolates and study of antimicrobial resistance. 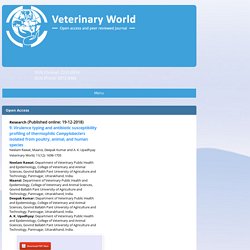 Involvement of multiple mutations in CAP resistance The CAP-resistant C4 strain and the parental strain C. jejuni ATCC 33560 were completely sequenced (GenBank accession number, CP019838), and both strains contained a single contig of 1.78 Mbp with no plasmids (Fig. 1a,b). 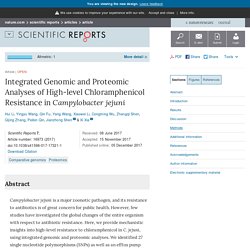 Genomic annotation of the parental strain indicated the presence of 1,869 putative coding sequences (Table S1). A co-linearity analysis revealed that C. jejuni ATCC 33560 had similar genome characteristics to those of C. jejuni NCTC 11168 (Fig. 1c). No known antibiotic resistance genes were identified in the resistant strain. Gut Pathog. 2016 Oct 26;8:48. eCollection 2016. Molecular epidemiology, virulence determinants and antimicrobial resistance of Campylobacter spreading in retail chicken meat in Central China. Chicken and their products are commonly consumed by human, but little detailed information is available about Campylobacter from retail chicken meat in China. 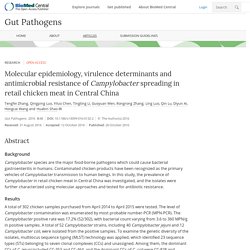 In this study, we found that 17.2% of the retail chicken meat samples were contaminated with Campylobacter and the contamination levels ranged from 3.6 to 360 MPN/g in positive samples in Central China. Furthermore, the major MLST genotypes of Campylobacter were CC-353, CC-464 and CC-1150, meanwhile all the isolates were fluoroquinolone-resistant. To my best known, this is the first surveillance report of Campylobacter enumeration study of retail chicken meat in Central China. Wong et al. study showed that the prevalence of C. jejuni and C. coli was as high as 89.1% in chicken meat with a total bacterial count varying from 0 to 110 MPN/g in New Zealand [28]. 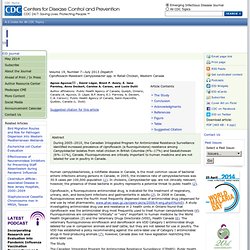 J. Appl. Poult. Res. Spring, 2003 vol. 12 no. 1 32-36 Effect of Sub-Therapeutic Levels of Antimicrobials in Feed on the Intestin. The Journal of Applied Poultry Research (JAPR) has moved. 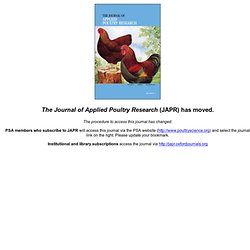 CSPI 04/11/00 Baytril (enrofloxacin) & fluoroquinolones - antibiotic-resistant Campylobacter concerns. Public-Interest Groups Call on Bayer to Support FDA Ban on Antibiotic Used in Poultry ProductionMeasure Will Protect Human Health by Slowing Development of Diseases That Resist Treatment With Antibiotics WASHINGTON - Health, consumer, and other public-interest groups joined together today in applauding the Food and Drug Administration’s (FDA) proposed ban on the use of a valuable antibiotic to treat poultry, in light of recent sharp increases in resistance to that antibiotic in humans. 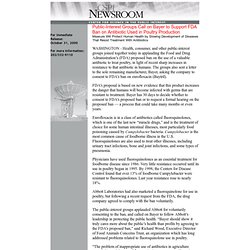 The groups also sent a letter to the sole remaining manufacturer, Bayer, asking the company to consent to FDA’s ban on enrofloxacin (Baytril). FDA’s proposal is based on new evidence that this product increases the danger that humans will become infected with germs that are resistant to treatment. Bayer has 30 days to decide whether to consent to FDA’s proposed ban or to request a formal hearing on the proposed ban — a process that could take many months or even years. 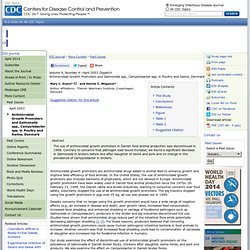 For sampling, 122 retail stores throughout Switzerland and Liechtenstein were randomly selected. From March until July 2002, food safety inspectors of the cantonal laboratories collected 415 samples of raw poultry meat (whole chickens as well as parts such as cutlet, meat cut into strips, legs, drumsticks, wings, and breast) from selected stores. Additionally, information about housing type of the poultry (as labelled), the country of origin (as labelled), refrigeration (chilled, frozen), and packing of the samples was recorded.