MICROORGANISMS 23/11/21 The Role of Ticks in the Emergence of Borrelia burgdorferi as a Zoonotic Pathogen and Its Vector Control: A Global Systemic Review. Ticks are widely distributed across the globe, serving as hosts for numerous pathogens that make them major contributors to zoonotic parasitosis. 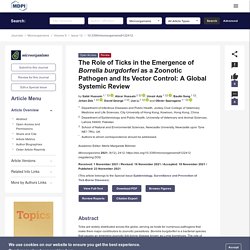 Borrelia burgdorferi is a bacterial species that causes an emerging zoonotic tick-borne disease known as Lyme borreliosis. The role of ticks in the transmission of this pathogen was explored in this study. According to this systematic review, undertaken according to Preferred Reporting Items for Systematic Reviews and Meta-Analyses (PRISMA) guidelines, 19 tick species are known to carry Borrelia burgdorferi, with more than half of the recorded cases in the last two decades related to Ixodes ricinus and Ixodes scapularis ticks. ISME JOURNAL 19/08/21 Maximum antigen diversification in a lyme bacterial population and evolutionary strategies to overcome pathogen diversity. 1.Allen JA, Clarke BC. 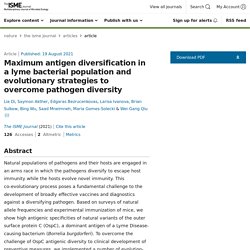 Frequency dependent selection: homage to E. B. Poulton. Biol J Linn Soc. 1984;23:15–8.Article Google Scholar 2.Papkou A, Guzella T, Yang W, Koepper S, Pees B, Schalkowski R, et al. PRZEGL EPIDEMIOL 2020;74(4): 652-661 CHALLENGES AND NEW METHODS IN THE DIAGNOSIS OF LYME DISEASE IN CHILDREN. THE CONVERSATION 13/05/20 How the Lyme disease epidemic is spreading and why ticks are so hard to stop.

In the 1970s, an epidemic of mysterious arthritis-like symptoms began spreading among children in the lushly wooded area around Lyme, Connecticut. 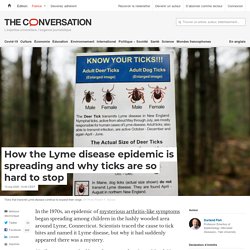 Scientists traced the cause to tick bites and named it Lyme disease, but why it had suddenly appeared there was a mystery. Similar symptoms had been documented on Long Island, New York, years before. Doctors there called it “Montauk spider bite” or “Montauk knee.” It would take until 1990 before scientists found museum specimens of ticks from Long Island and were able to connect the same tick-borne bacteria to both locations and suggest how Lyme disease might have started its modern spread. Duke's Nicholas School of the Environment VIA YOUTUBE 28/12/10 The Function of Biodiversity in Zoonotic Disease Risk: The Cases of Lyme Disease and West Nile Virus. VIRUSES 30/07/19 Prediction of the Spatial Origin of Puumala Virus Infections Using L Segment Sequences Derived from a Generic Screening PCR. 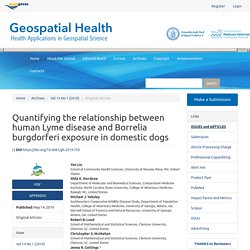 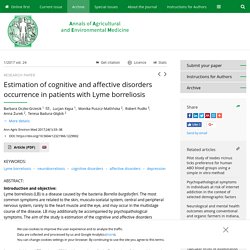 The most common symptoms are related to the skin, musculo-scelatal system, central and peripheral nervous system, rarely to the heart muscle and the eye, and may occur in the multistage course of the disease. LB may additionally be accompanied by psychopathological symptoms. The aim of the study is estimation of the cognitive and affective disorders occurence in patients with LB. Material and Methods:The study was carried out in the group of 121 patients (61 females, 60 males) aged 18–65; mean age 46 years. Results:Cognitive disorders occurred statistically significantly more often in patients with neuroborreliosis (14.7%) than in patients with Lyme arthritis (4.3%). 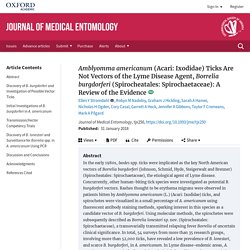 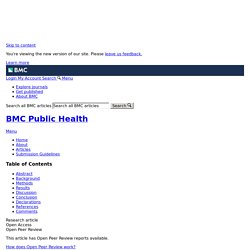 It is primarily transmitted through a bite from a tick that is infected with the Borrelia burgdorferi bacteria [1]. When left untreated, Lyme disease may cause severe and potentially chronic symptoms such as neurological diseases, joint problems, and heart diseases [2]. Both societal and scientific issues call for further research to build effective public health programs to prevent Lyme disease.

The first societal issue is the sharp increase in the incidence of tick bites and tick-borne diseases [3, 4]. As an example from the Netherlands, in 1994, 191 per 100,000 Dutch inhabitants visited their GP concerning a tick bite; a number that had risen to 488 per 100,000 inhabitants in 2014, although this now seems to stabilize [5]. A systematic perusal of the literature1 reveals three issues in this field of study that may hamper the development of effective interventions. 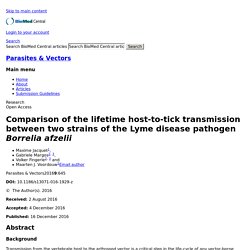 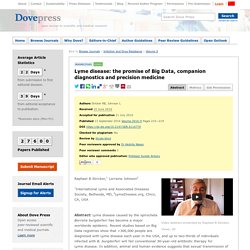 Views: 20 Raphael B Stricker,1 Lorraine Johnson2. PHYSORG 25/08/16 How Lyme disease bacteria spread through the body. Researchers have developed a live-cell-imaging-based system that provides molecular and biomechanical insights into how Lyme disease bacteria latch onto and move along the inside surface of blood vessels to reach key destinations in the body where they may be able to persist longer and avoid treatment. 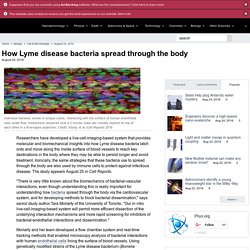 Ironically, the same strategies that these bacteria use to spread through the body are also used by immune cells to protect against infectious disease. The study appears August 25 in Cell Reports. "There is very little known about the biomechanics of bacterial-vascular interactions, even though understanding this is really important for understanding how bacteria spread through the body via the cardiovascular system, and for developing methods to block bacterial dissemination," says senior study author Tara Moriarty of the University of Toronto. Share Video undefined. NATURE 16/06/16 Contrasting emergence of Lyme disease across ecosystems. Study areas—regional descriptions The LD incidence data come from across the whole of Norway. We grouped into four regions based on biogeography; East (Østfold, Akershus, Oslo, Hedmark, Oppland and Buskerud Counties); South (Vestfold, Telemark, Aust-Agder and Vest-Agder Counties); West (Rogland, Hordaland, Sogn and Fjordane, and Møre and Romsdal Counties); and North (Sør-Trøndelag, Nord-Trøndelag, Nordland, Troms and Finnmark Counties).

These four regions span contrasting ecosystems. The West region is separated from East by a mountain range, which is a major climatic division with resulting differences in vegetation. Further, topography differs markedly between West and East. Study areas—field sites In addition to the analysis of LD incidence across the whole of Norway, we conducted detailed field studies, which included a deer exclosure experiment, questing tick surveys and associated B. burgdorferi s.l. prevalence, and tick burdens on red deer ear samples. Int. J. Mol. Sci. 2014, 15(3), 4284-4298; Detection of Borreliae in Archived Sera from Patients with Clinically Suspect Lyme Disease. 1. Introduction In North America, Lyme disease is most often caused by Borrelia burgdorferi sensu stricto [1]. According to the guidelines of the Centers for Disease Control and Prevention (CDC), its diagnosis is primarily based on symptoms, physical findings (e.g., rash), and the possibility of exposure to infected ticks; laboratory testing is helpful if used correctly and performed with validated methods [2].

However, the clinical manifestations of Lyme disease are highly variable and often not easily distinguished from those caused by other illnesses in clinical practice [3]. The characteristic erythema migrans (EM) rash may not display a classic bull’s-eye (ring-within-a-ring) appearance, a fact that may be underappreciated. Although initially described as a joint disease [5], Lyme disease is actually a systemic infection presenting with bacteremia at some point during the course of the disease [6–9]. 2. The Turkish Journal of Pediatrics 2015; 57: 522-524 A presentation of Lyme disease: pseudotumor cerebri. SCARSDALETVETS_COM - JANV 2014 - Lyme diseace. ENTOMOLOGY TODAY 29/02/16 Scientists Have Sequenced the Genome of the Tick that Transmits Lyme Disease. The blacklegged tick, Ixodes scapularis, can transmit Lyme disease and a number of other illnesses.

Photo by Andrew Nuss. An international team of scientists led by Purdue University has sequenced the genome of the tick that transmits Lyme disease, the most common vector-borne illness in North America. Ixodes scapularis, known as the blacklegged tick or the deer tick, is the first tick species to have its genome sequenced. NATURE 09/02/16 Genomic insights into the Ixodes scapularis tick vector of Lyme disease. The first genome assembly for a tick vector of disease The assembly, IscaW1, comprises 570,640 contigs in 369,495 scaffolds (N50=51,551 bp) representing 1.8 Gbp, including gaps (Table 1, Supplementary Table 2). The ab initio annotation of 18,385 scaffolds >10 Kbp in length and representing 1.2 Gbp (57% of the genome) predicted 20,486 protein-coding genes, and 4,439 non-coding RNA genes (Supplementary Figs 1–6 and Supplementary Table 3).

Ixodid ticks typically have haploid genomes that exceed 1 Gbp (ref. 8). In contrast, the 90 Mbp genome of the two-spotted spider mite, Tetranychus urticae, a horticultural pest, is the smallest of any known arthropod, and contains <10% transposable elements9. Repetitive DNA is estimated to comprise ~70% of the I. scapularis genome10, reflecting an extreme case of tandem repeat and transposable element accumulation. The I. scapularis genome possesses 26 acrocentric autosomes and two sex chromosomes (XX:XY)11, 12.

CDC 02/11/15 Borrelia mayonii. In 2013, scientists at the Mayo Clinic noticed an unusual result while testing blood from patients suspected of having Lyme disease. Cooperation between Mayo Clinic, state public health agencies, and CDC confirmed the discovery as a new bacterial species, also found in blacklegged ticks. Joint efforts between these groups are currently underway to find more patients infected with this bacteria, to look for additional areas where infected ticks live, and to identify other bacteria that cause tickborne disease. What is Borrelia mayonii? Borrelia mayonii is the proposed name for a new bacteria species recently found to cause Lyme disease in six people who live in the upper Midwestern United States.

The Nature Of Things VIA YOUTUBE 01/10/15 Ticked Off The Mystery Of Lyme Disease Cldd. THE HORSE 25/07/14 Equine Lyme Disease: What You Need to Know. Female adult Ixodes spp. ticks are believed to be primarily responsible for transmitting B. burgdorferi to horses. ENTOMOLOGY TODAY 30/03/15 Mice Aren’t Nice, They Help Transmit Lyme Disease. By Hannah Foster. PLOS 17/02/15 The Lyme Disease Pathogen Has No Effect on the Survival of Its Rodent Reservoir Host. Abstract Zoonotic pathogens that cause devastating morbidity and mortality in humans may be relatively harmless in their natural reservoir hosts. The tick-borne bacterium Borrelia burgdorferi causes Lyme disease in humans but few studies have investigated whether this pathogen reduces the fitness of its reservoir hosts under natural conditions. PLOS 04/02/15 Health Care Costs, Utilization and Patterns of Care following Lyme Disease. Abstract Background. INFECTION ECOLOGY & EPIDEMIOLOGY - 2011 - Global ecology and epidemiology of Borrelia garinii spirochetes.