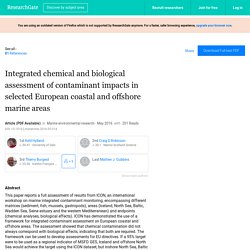 Hylland, K., Ruus, A., Grung, M., Green, N., 2009. Tissue contaminants and biomarker responses in Atlantic cod (Gadus morhua L.). J. Hylland, K., Sandvik, M., Skåre, J.U., Beyer, J., Egaas, E., Goksøyr, A., 1996. Toring. PARLEMENT EUROPEEN - Réponse à question P-004889-16 Oil exploration and prospecting activities in the Algarve. As part of its work to implement Birds and Habitats Directives via the Natura 2000 network, Portugal has undertaken to ‘conserve habitats and populations of species on the basis of how the areas have been classified’ (Article 8(1) of Decree-Law 140/99). 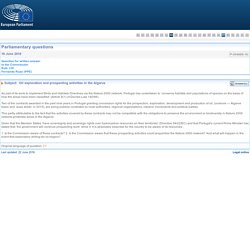 Two of the contracts awarded in the past nine years in Portugal granting concession rights for the prospection, exploration, development and production of oil, (onshore — Algarve basin and ‘duas áreas’ in 2015), are being publicly contested by local authorities, regional organisations, citizens' movements and political parties. This partly attributable to the fact that the activities covered by these contracts may not be compatible with the obligations to preserve the environment or biodiversity in Natura 2000 network-protected areas in the Algarve. 1. Is the Commission aware of these contracts? 2. FOOD PAKAGING FORUM 07/06/16 Effects of microplastics on fish.

In an article published on June 2, 2016 by The Washington Post, journalist Chelsea Harvey reports on a new study investigating the effects of microplastic polystyrene particles on the European perch (Perca fluviatilis). 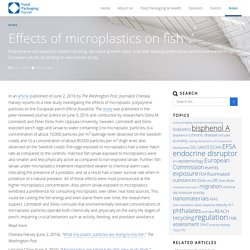 Fish eggs exposed to microplastics had a lower hatch rate as compared to the controls. Hatched fish larvae exposed to microplastics were also smaller and less physically active as compared to non-exposed larvae. Read more Chelsea Harvey (June 2, 2016). Lorraine Chow (June 3, 2016). Reference. UNIVERSITY OF LONDON - JULY 2015 - Economic valuation of marine litter and microplastic pollution in the marine environment: An initial assessment of the case of the United Kingdom. 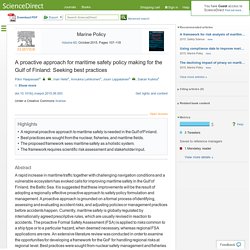 Best practices are sought from the nuclear, fisheries, and maritime fields. The proposed framework sees maritime safety as a holistic system. The framework requires scientific risk assessment and stakeholder input. Abstract A rapid increase in maritime traffic together with challenging navigation conditions and a vulnerable ecosystem has evoked calls for improving maritime safety in the Gulf of Finland, the Baltic Sea. 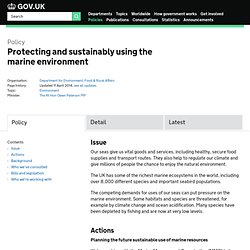 They also help to regulate our climate and give millions of people the chance to enjoy the natural environment. The UK has some of the richest marine ecosystems in the world, including over 8,000 different species and important seabird populations. The competing demands for uses of our seas can put pressure on the marine environment.

Some habitats and species are threatened, for example by climate change and ocean acidification. Actions Planning the future sustainable use of marine resources We’re working with the Marine Management Organisation (MMO) to have marine plans in place for all English seas by 2022. We have published the east inshore and offshore marine plans and are now implementing them. The MMO has started preparing plans for the south inshore and offshore areas. EUROPE - Marine Environment and Coasts. The European Commission launched a review of the EU ICZM Recommendation , with a view to a follow-up proposal by the end of 2011. An impact assessment was conducted to explore the need and options for future EU action and to assess potential social, economic and environmental consequences that new initiatives proposed by the European Commission may have.

On 23 March the Commission launched an on-line public consultation , for 8 weeks, to seek the views of stakeholders and all interested parties to inform the impact assessment. The consultation report can be downloaded here . To complete the consultation the European Commission organised a public hearing on 30th of May 2011 to discuss options for future EU action in the field of Integrated Coastal Zone Management.

All those interested in coastal planning and management were invited to participate. The OURCOAST Stakeholder Conference " Integrated Coastal Zone Management in Europe: the way forward " took place on 27-28 October in Riga. European Directory of Marine Environmental Data (EDMED) Free search 'Free search' - enter a word or simple phrase — the character string may contain A-Z, a-z, 0-9 and white space only. 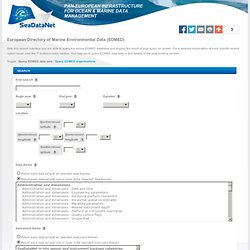 The database is searched for occurrences of this string. All records containing the string are returned in the results table. EUROPEAN ENVIRONMENT AGENCY - 2010 - Marine and coastal environment — SOER 2010 thematic assessment. Drivers and impacts The impacts on Europe's seas and coasts are driven by human activities such as fishing and aquaculture,land-based activities such as fertiliser and pesticide use in agriculture, chemical pollution from industries and shipping, and the exploitation of oil, gas and other resources. 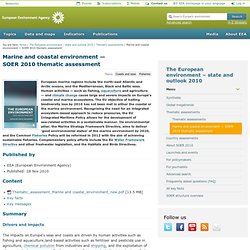 Further negative factors include the introduction of alien species, marine litter, noise, urbanisation and tourism, and the destruction of habitats for ports and off‑shore structures. Many of these impacts are exacerbated by climate change. As a result, the ecosystem services provided by Europe's seas and coasts are deteriorating, including a decline in goods such as fish and recreational quality. EUROPEAN ENVIRONMENT AGENCY - 2010 - THE EUROPEAN ENVIRONMENT STATE AND OUTLOOK 2010 MARINE AND COASTAL ENVIRONMENT. MYOCEAN - JULY 2011 - GMES MARINE ENVIRONMENT MONITORING SERVICE AS DEVELOPED BY MYOCEAN.

Le site MEDITERRANEAN PANDA. EUROPE 11/03/08 Questions and Answers on criminal law measures against maritime pollution. Brussels, 11 March 2008 Why is the Commission presenting a new proposal for a directive? The new proposal for an amending directive on ship-source pollution aims to fill a legal vacuum created by a ruling of the European Court of Justice in October 2007 which annulled Framework Decision 2005/667/JHA "to strengthen the criminal-law framework for the enforcement of the law against ship-source pollution".