VETERINARY WORLD 09/11/21 Seroprevalence and risk factors for brucellosis in small ruminant flocks in Karnataka in the Southern Province of India. Research (Published online: 09-11-2021) 3. 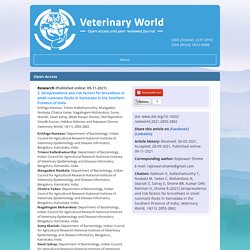 FRONT. VET. SCI. 21/09/21 Brucella suis Seroprevalence and Associated Risk Factors in Dogs in Eastern Australia, 2016 to 2019. Introduction Brucellosis is a bacterial zoonotic disease caused by members of the genus Brucella. 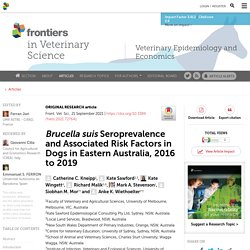 These bacteria are gram-negative facultative intracellular coccobacilli of the class Alphaproteobacteria. Brucella spp. localize in lymphoreticular tissue and primarily cause disease in the reproductive tissues in their natural hosts (1). Transmission between hosts occurs by contact with infected body fluids and tissues via mucous membranes or broken skin, as well as through ingestion and inhalation.

The infection can range from mild to severe multiorgan disease and from subclinical to acute or chronic presentations. First diagnosed in domestic pigs in the state of Queensland (QLD) in 1936 (10), B. suis biovar 1 was a major cause of production loss in commercial piggeries until a test and slaughter program eradicated it from domestic pigs in 1968. Materials and Methods Study Population and Owner Questionnaire. MICROORGANISMS 26/08/21 Bayesian Estimation of the Prevalence and Test Characteristics (Sensitivity and Specificity) of Two Serological Tests (RB and SAT-EDTA) for the Diagnosis of Bovine Brucellosis in Small and Medium Cattle Holders in Ecuador.

In Ecuador, a national program for bovine brucellosis control has been in implementation since 2008. 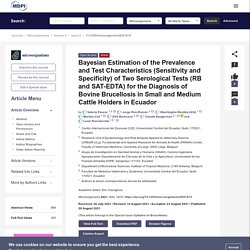 Given the costs, small- and medium-sized livestock holders are not completely committed to it. The objective of this study was to determine true prevalence (TP) of bovine brucellosis in small- and medium-sized herd populations, as well as the diagnostic sensitivity and specificity of the Rose Bengal (RB) test and the sero-agglutination test (SAT)-EDTA using a Bayesian approach. Between 2011 and 2016, 2733 cattle herds were visited, and 22,592 animal blood samples were taken in nineteen provinces on mainland Ecuador. Bayes-p and deviance information criterion (DIC) statistics were used to select models. Additionally, risk-factor analysis was used for herds according to their brucellosis test status. ►▼ Show Figures Figure 1.

VETERINARY WORLD 17/08/21 Biochemical and physicochemical indicators of the quality of milk and meat obtained from cows with brucellosis. Research (Published online: 17-08-2021) 18. 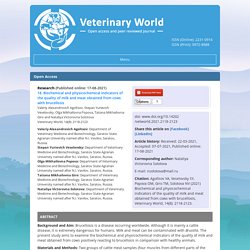 Highlights The R0 of bovine brucellosis in agro-pastoral areas of Tanzania was 1.07. 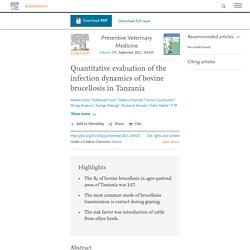 The most common mode of brucellosis transmission is contact during grazing. The risk factor was introduction of cattle from other herds. Abstract. ANIMALS 11/06/21 Seroprevalence and Associated Risk Factors of Bovine Brucellosis in District Gujranwala, Punjab, Pakistan. Bovine brucellosis is a contagious zoonotic disease that causes economic losses through abortion and infertility. 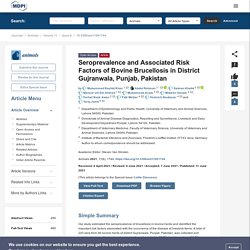 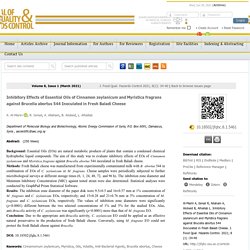 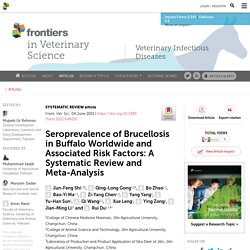 Classical taxonomists recognize six species of the causative bacterium, Brucella, based on subtle phenotypic and antigenic differences and host specificity: B. abortus (bovine), B. melitensis (caprine and ovine), B. ovis (ovine), B. canis (canine), and B. neotomae (desert wood rat) (5); some of these Brucella spp. are classically divided into biovars. Brucellosis can affect phagocytes, mainly infecting the reproductive system and lymph nodes. Its typical clinical presentation in female animals includes abortion of the calf, and in male animals, orchitis, epididymitis, and arthritis (6, 7). The highest infection rate among wild animals is found in American bison and bison (39.9%), followed by alpine bison and goats (33%). Research in Veterinary Science Available online 21 May 2021 Working towards development of a sustainable brucellosis control programme, the Azerbaijan example. 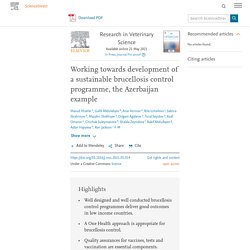 A One Health approach is appropriate for brucellosis control. Quality assurances for vaccines, tests and vaccination are essential components. Reliable data are required for decision making. Identification of vaccinates is required for assessment of coverage. PATHOGENS 18/05/21 Serosurvey and Risk Factors Associated with Brucella Infection in High Risk Occupations from District Lahore and Kasur of Punjab, Pakistan. Brucellosis is a neglected zoonotic disease, and occupations with a high risk of infection exist. 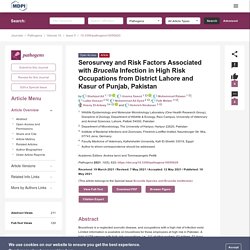 Limited information is available on brucellosis for these employees at high risk in Pakistan. A total of 459 persons with high-risk occupations, i.e., 211 abattoir workers, 63 milkers, 52 dung cake makers, 44 veterinarians, 44 shepherds, and 45 veterinary students of the districts Kasur and Lahore, Pakistan, were tested in this study. Blood samples and information on place of residence, gender, age, urbanicity, type of occupation, socioeconomic status, contact with animals, consumption of raw milk, contact to women who had a miscarriage, contact to aborted animal fetus or abortion material, pregnancy, miscarriage history, or intrauterine fetal death were collected.

Serum samples were examined using Rose Bengal tests for anti-Brucella antibodies and seropositive samples were subjected to genus-specific qPCR for the detection of DNA. ►▼ Show Figures Figure 1. Rev. Soc. Bras. Med. Trop. vol.50 no.4 Uberaba jul./ago. 2017 Guidelines for the management of human brucellosis in the State of Paraná, Brazil. ANIMALS 08/03/21 The Development of an Abattoir-Based Surveillance System in Lao PDR for the Detection of Zoonoses in Large Ruminants: Q Fever and Brucellosis Seroepidemiology as a Pilot Study.

It has been declared a priority zoonosis in Côte d'Ivoire (3) and Mali (4), and the only strain identified in the area is B. abortus (5–7), affecting cattle, small ruminants and humans. The economic losses due to brucellosis in animals are due to a decline in fertility in cows, resulting from abortions, and the reduction of milk production. In Mali, decreased fertility and lower milk production have been estimated to be 20 and 16%, respectively (8). In Côte d'Ivoire, it was estimated that sedentary breeders lose 10% of their annual income to brucellosis related causes (9). FRONT. VET. SCI. 23/10/20 A Novel Arthropod Host of Brucellosis in the Arid Steppe Ecosystem. Background Brucellosis, a zoonotic infectious disease caused by Brucella spp., was once distributed worldwide (1); China effectively curbed it using attenuated vaccines in the 1980s (2, 3).

However, in the last 10 years, China has seen a resurgence in the occurrence of brucellosis in animals. Alarmingly, there have also been reports of outbreaks of human brucellosis especially in Inner Mongolia (4). This disease poses serious problems against the healthy development of animal husbandry-associated economy and leads to the development of issues of social and public security (5, 6). VETERINARY SCIENCES 08/09/20 Sheep Brucellosis in Kuwait: A Large-Scale Serosurvey, Identification of Brucella Species and Zoonotic Significance. Brucellosis is a common zoonotic disease of major concern in humans of Kuwait, and B. melitensis causes most human cases. The disease is endemic in small ruminants, cattle, and camels for decades, causing substantial economic losses in livestock production.

However, a nationwide large-scale investigation of brucellosis in the small ruminant population has not been done in the past two decades. A serosurvey of sheep brucellosis in the five districts of Kuwait with most animal production farms was done between 2016 and 2019. Biosafety and Health Available online 29 July 2020 Laboratory-acquired infections with Brucella bacteria in China. 1. Introduction Brucellosis, also known as undulating fever, is a zoonotic infectious disease caused by Brucella spp. bacteria, which commonly infect sheep, cattle, goats, pigs, and dogs [1,2]. Among them, Brucella melitensis is the most infectious to humans with the highest pathogenicity [3]. Humans often acquire infection through skin and mucous membranes (feces and hair from the infected animals), the digestive tract (food made from infected animals), and the respiratory tract (aerosols) [4,5].

1. Introduction Brucellosis is a common contagious, communicable and One Health endemic zoonotic disease of public health significance with a high rate of morbidity and life sterility [1]. INFECTIOUS DISEASES AND POVERTY 24/05/20 Brucellosis in China: history, progress and challenge. According to the World Health Organization (WHO) factsheet, although approximately 500 000 brucellosis cases are reported annually, the true incidence is always much higher than the reported number of cases. Up to now, there is no distinct and clear guideline for brucellosis diagnosis, with different countries having their own rules. FRONT. VET. SCI. 15/04/20 Analytic Sensitivity of an ELISA Test on Pooled Sera Samples for Detection of Bovine Brucellosis in Eradication Stages in Uruguay.

Introduction. Front. Vet. Sci. 17/03/20 Analytic sensitivity of an ELISA test on pooled sera samples for detection of bovine brucellosis in eradication stages in Uruguay. JOURNAL OF VETERINARY MEDICINE AND RESEARCH 03/02/20 Sero-Prevalence Study of Bovine Brucellosis and Its Risk Factors in Dairy Farms in and Around Adama Town, Oromia Regional State, Central Ethiopia. Iranian Journal of Veterinary Science and Technology - 2019 - Case-control study on risk factors associated with brucellosis in aborted cattle of Jimma zone, Ethiopia. References. Environmental Health and Preventive Medicine 02/01/20 Spatial-temporal distribution of human brucellosis in mainland China from 2004 to 2017 and an analysis of social and environmental factors.

CDC EID - AOUT 2018 - Brucellosis in Dogs and Public Health Risk. VETERINARY WORLD 01/06/18 Evaluation of the General Organization of Veterinary Services control program of animal brucellosis in Egypt: An outbreak investigation of brucellosis in buffalo. Veterinary Medicine International Volume 2018, Seroprevalence and Associated Risk Factors of Brucellosis among Indigenous Cattle in the Adamawa and North Regions of Cameroon.

12th International Symposium on the Epidemiology and Control of Biological,Chemical and Physical Hazards in Pigs and Pork - Proceedings Book, Foz doIguaçu, august 21-24, 2017. Seroprevalence of Brucella Spp., Lepstospira Spp and Toxoplasma Gondii in wild. Front. Vet. Sci. 15/12/17 Perspectives and outcomes of the activity of a reference laboratory for brucellosis. FRONT. VET. SCI. 05/12/17 MLVA and LPS Characteristics of Brucella canis Isolated from Humans and dogs in Zhejiang, China. JOURNAL OF VETERINARY MEDICINE AND ANIMAL HEALTH 30/11/17 Sero-prevalence and associated risk factors for Brucella sero-positivity among small ruminants in Tselemti districts, Northern Ethiopia.