PLOS 15/09/15 Community-Effectiveness of Temephos for Dengue Vector Control: A Systematic Literature Review. Abstract The application of the organophosphate larvicide temephos to water storage containers is one of the most commonly employed dengue vector control methods. 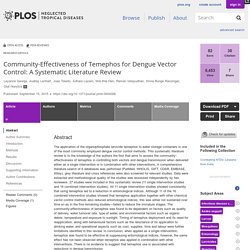 This systematic literature review is to the knowledge of the authors the first that aims to assess the community-effectiveness of temephos in controlling both vectors and dengue transmission when delivered either as a single intervention or in combination with other interventions. A comprehensive literature search of 6 databases was performed (PubMed, WHOLIS, GIFT, CDSR, EMBASE, Wiley), grey literature and cross references were also screened for relevant studies. Data were extracted and methodological quality of the studies was assessed independently by two reviewers. 27 studies were included in this systematic review (11 single intervention studies and 16 combined intervention studies). 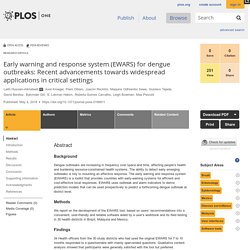 The ability to detect early emerging outbreaks is key to mounting an effective response. The early warning and response system (EWARS) is a toolkit that provides countries with early-warning systems for efficient and cost-effective local responses. EWARS uses outbreak and alarm indicators to derive prediction models that can be used prospectively to predict a forthcoming dengue outbreak at district level. Methods We report on the development of the EWARS tool, based on users’ recommendations into a convenient, user-friendly and reliable software aided by a user’s workbook and its field testing in 30 health districts in Brazil, Malaysia and Mexico. Findings 34 Health officers from the 30 study districts who had used the original EWARS for 7 to 10 months responded to a questionnaire with mainly open-ended questions.

Conclusion. PLOS 23/03/17 The relationship between entomological indicators of Aedes aegypti abundance and dengue virus infection. PLOS 06/03/14 Vectorial Capacity of Aedes aegypti: Effects of Temperature and Implications for Global Dengue Epidemic Potential. Abstract Dengue is a mosquito-borne viral disease that occurs mainly in the tropics and subtropics but has a high potential to spread to new areas. 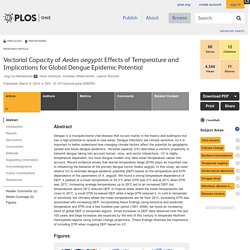 PLOS 27/03/14 Undesirable Consequences of Insecticide Resistance following Aedes aegypti Control Activities Due to a Dengue Outbreak. Abstract Background During a dengue outbreak with co-circulation of DENV-1 and -2 in the city of Boa Vista, one patient was diagnosed with DENV-4, a serotype supposed absent from Brazil for almost 30 years. 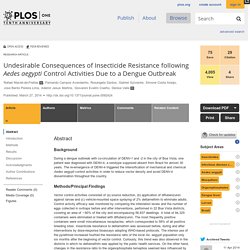 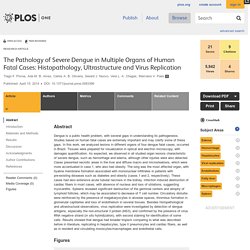 Studies based on human fatal cases are extremely important and may clarify some of these gaps. In this work, we analyzed lesions in different organs of four dengue fatal cases, occurred in Brazil. Tissues were prepared for visualization in optical and electron microscopy, with damages quantification. As expected, we observed in all studied organ lesions characteristic of severe dengue, such as hemorrhage and edema, although other injuries were also detected. Citation: Póvoa TF, Alves AMB, Oliveira CAB, Nuovo GJ, Chagas VLA, Paes MV (2014) The Pathology of Severe Dengue in Multiple Organs of Human Fatal Cases: Histopathology, Ultrastructure and Virus Replication. PLOS 08/05/14 Assessing the Relationship between Vector Indices and Dengue Transmission: A Systematic Review of the Evidence. Abstract Background. 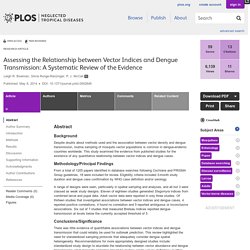 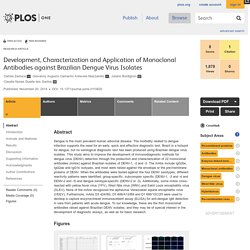 The morbidity related to dengue infection supports the need for an early, quick and effective diagnostic test. Brazil is a hotspot for dengue, but no serological diagnostic test has been produced using Brazilian dengue virus isolates. This study aims to improve the development of immunodiagnostic methods for dengue virus (DENV) detection through the production and characterization of 22 monoclonal antibodies (mAbs) against Brazilian isolates of DENV-1, -2 and -3. The mAbs include IgG2bκ, IgG2aκ and IgG1κ isotypes, and most were raised against the envelope or the pre-membrane proteins of DENV. 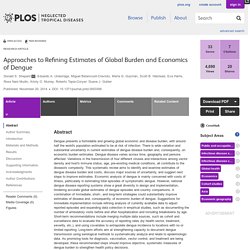 Since dengue is a reportable disease in many endemic countries, the incidence of dengue in a population can be estimated initially from cases reported to the surveillance system. But because surveillance systems are not designed to capture all episodes of symptomatic dengue, relatively low reporting rates lead to conservative incidence estimates [23]–[26]. PLOS 30/04/15 Reviewing Dengue: Still a Neglected Tropical Disease? 1) Review of common definitions of NTDs The definitions of NTDs have been developed over time and are being used by different agencies differently. 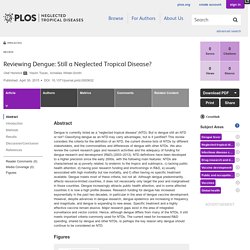 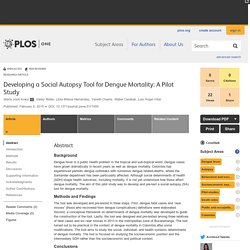 Dengue cases have grown dramatically in recent years as well as dengue mortality. Colombia has experienced periodic dengue outbreaks with numerous dengue related-deaths, where the Santander department has been particularly affected. Although social determinants of health (SDH) shape health outcomes, including mortality, it is not yet understood how these affect dengue mortality. PLOS 11/12/14 The Effect of Virus-Blocking Wolbachia on Male Competitiveness of the Dengue Vector Mosquito, Aedes aegypti. PLOS 22/05/12 Surveillance of Dengue Fever Virus: A Review of Epidemiological Models and Early Warning Systems.

Abstract Dengue fever affects over a 100 million people annually hence is one of the world's most important vector-borne diseases. The transmission area of this disease continues to expand due to many direct and indirect factors linked to urban sprawl, increased travel and global warming. Current preventative measures include mosquito control programs, yet due to the complex nature of the disease and the increased importation risk along with the lack of efficient prophylactic measures, successful disease control and elimination is not realistic in the foreseeable future. Epidemiological models attempt to predict future outbreaks using information on the risk factors of the disease. Through a systematic literature review, this paper aims at analyzing the different modeling methods and their outputs in terms of acting as an early warning system.

However, few have evaluated the utility of web search query data for other diseases, especially those of high morbidity and mortality or where a vaccine may not exist. In this study, we aimed to assess whether web search queries are a viable data source for the early detection and monitoring of dengue epidemics. PLOS 31/05/11 A New Approach to Monitoring Dengue Activity. Citation: Madoff LC, Fisman DN, Kass-Hout T (2011) A New Approach to Monitoring Dengue Activity. PLoS Negl Trop Dis 5(5): e1215. doi:10.1371/journal.pntd.0001215.