PATHOGENS 21/12/20 Validation of a Novel Commercial ELISA Test for the Detection of Antibodies against Coxiella burnetii. Q fever is a zoonosis caused by Coxiella burnetii, a Gram-negative pathogen with a complex life cycle and a high impact on public and animal health all over the world. 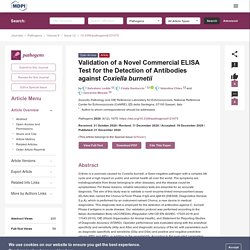 The symptoms are indistinguishable from those belonging to other diseases, and the disease could be symptomless. For these reasons, reliable laboratory tests are essential for an accurate diagnosis. The aim of this study was to validate a novel enzyme-linked immunosorbent assay (ELISA) test, named the Chorus Q Fever Phase II IgG and IgM Kit (DIESSE, Diagnostica Senese S.p.A), which is performed by an instrument named Chorus, a new device in medical diagnostics. This diagnostic test is employed for the detection of antibodies against C. burnetii Phase II antigens in acute disease. This is an open access article distributed under the Creative Commons Attribution License which permits unrestricted use, distribution, and reproduction in any medium, provided the original work is properly cited.

JOURNAL OF DAIRY SCIENCE 17/04/19 Bayesian estimation of sensitivity and specificity of a PCR method to detect Coxiella burnetii in milk and vaginal secretions in sheep and goat samples. FRONT. VET. SCI. 05/11/20 Coxiella burnetii in Dromedary Camels (Camelus dromedarius): A Possible Threat for Humans and Livestock in North Africa and the Near and Middle East? Introduction Q fever is a neglected zoonotic disease caused by bacteria (1, 2). 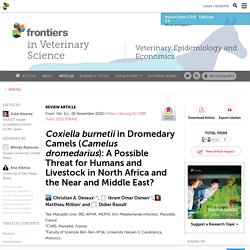 It is generally admitted that clones of Coxiella burnetii, the etiologic agent of Q fever, circulate in wildlife and infects domestic ruminants. Very few bacteria are required to initiate the infection process (3). Usually, humans become infected through the aerosol route during contact with C. burnetii–positive domestic animals or their products (2, 4). Infection of humans concerns first the farmers and other professionals that have contacts with animals (e.g., veterinarians), but epidemics have been reported in other social groups. Regarding domestic ruminants, C. burnetii is responsible for epizooties with increased morbidity and mortality in livestock. PATHOGENS 25/10/20 Transstadial Transmission from Nymph to Adult of Coxiella burnetii by Naturally Infected Hyalomma lusitanicum. Coxiella burnetii (Derrick) Philip, the causative agent of Q fever, is mainly transmitted by aerosols, but ticks can also be a source of infection. 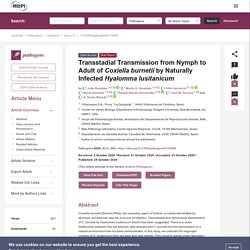 Transstadial and transovarial transmission of C. burnetii by Hyalomma lusitanicum (Koch) has been suggested. There is a close relationship between this tick species, wild animals and C. burnetii but the transmission in a natural environment has not been demonstrated. In this study, we collected 80 engorged nymphs of H. lusitanicum from red deer and wild rabbits. They moult to adults under laboratory conditions and we feed them artificially through silicone membranes after a preconditioning period. C. burnetii DNA was tested in ticks, blood and faeces samples using real-time PCR. ►▼ Show Figures Figure 1 This is an open access article distributed under the Creative Commons Attribution License which permits unrestricted use, distribution, and reproduction in any medium, provided the original work is properly cited ►▼ Show Figures.

BMC Veterinary Research 28/08/20 Comparison of three serological tests for the detection of Coxiella burnetii specific antibodies in European wild rabbits. Coxiella burnetii is the cause of Q fever or coxiellosis, a zoonotic bacterial disease of public health significance. 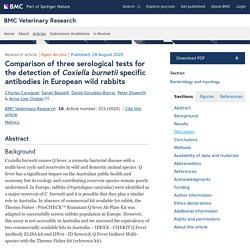 The life cycle of the C. burnetii include a wide range of host animal species, commonly farm livestocks, which act as reservoirs, transmitting the disease by shedding the bacterium into the environment. C. burnetii infections in cattle, sheep and goats are ususally asymptomatic but can cause production losses including abortions, infertility, still births, weak offsprings, metritis, mastitis and other reproductive disorders [1, 2]. C. burnetii can be shed in the urine, faeces, placental material and milk of infected animals [3]. The organism can persist in the environment in a spore-like form for several months increasing the likelihood of infection of a new host [4].

Goats and sheep are considered the main reservoir of C. burnetii, and both have a significant role as source of human infection (1, 2). 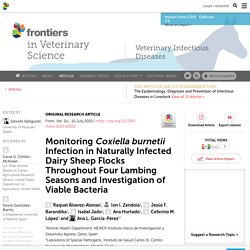 Q fever causes abortions in small ruminants (3), and once C. burnetii enters into a flock, infection spreads rapidly. Infected animals shed C. burnetii through birth products, vaginal fluids, feces, milk, and urine for several weeks after abortion or normal parturition (4–10), but the bacterial load shed by aborted animals is higher than that shed by those that deliver normally (9). Abortion rates due to C. burnetii are especially high in goats (up to 70–90%) (4, 11) but lower in sheep (usually below 6%) (12). Coxiella burnetii shedding by infected animals, together with their movements in indoor animal premises, promotes the formation of contaminated aerosols. JOURNAL OF VETERINARY INTERNAL MEDICINE 06/08/18 Management of Coxiella burnetii infection in livestock populations and the associated zoonotic risk: A consensus statement. Abstract Infections caused by Coxiella burnetii, commonly referred to as coxiellosis when occurring in animals and Query fever when occurring in humans, are an important cause of abortions, decreased reproductive efficiency, and subclinical infections in ruminants. 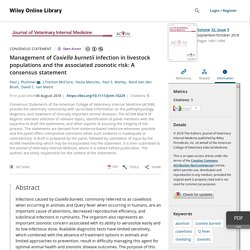 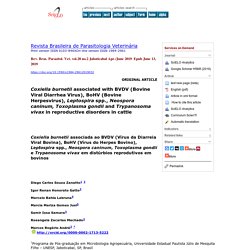 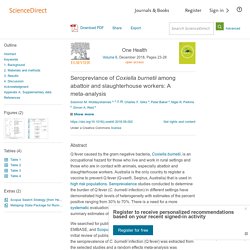 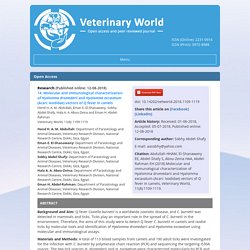 Molecular and immunological characterization of Hyalomma dromedarii and Hyalomma excavatum (Acari: Ixodidae) vectors of Q fever in camels Hend H. ARCHIVES OF PUBLIC HEALTH 06/01/18 Farming, Q fever and public health: agricultural practices and beyond. The pleomorphic etiological agent of Q fever, C. burnetii is an intracellular bacterium that replicates in the parasitophorous vacuole of the parasitized cell (generally a macrophage or a trophoblast). 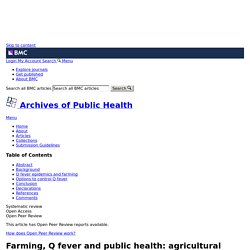 The parasitic activity of this bacterium consists of building a finely orchestrated machinery that diverts the normal metabolism of the parasitized cell to become a surviving container devoted to the proliferation of the bacterium [7]. C. burnetii has a broad host range (with a role in dissemination or maintenance of the disease) and is found in unicellular organisms, invertebrates, birds and mammals [8]. Domestic ruminants are the primary reservoir for human infection, and the majority of human epidemics are related to exposure to small ruminant (sheep and goats) infected products (placenta membranes, birth fluids, animal excretions or contaminated dust) [9, 10]. Bulgarian Journal of Veterinary Medicine - 2017 - ROLE OF COXIELLA BURNETII IN THE DEVELOPMENT OF FEVER OF UNKNOWN ORIGIN: А MINI REVIEW. CDC EID - MAI 2017 - Au sommaire notamment: No Such Thing as Chronic Q Fever. Author affiliations: French National Referral Center for Q Fever, Marseille, France Highlight and copy the desired format.

Abstract Modern diagnostic methods enable clinicians to look beyond a diagnosis of chronic Q fever and discern whether patients instead have persistent focalized Coxiella burnetii infection(s). Use of these methods and development of criteria to define and treat such infections, especially cardiovascular infections, will improve the prognosis for patients previously thought to have chronic Q fever. VETERINARY RESEARCH 05/04/16 Spread of Coxiella burnetii between dairy cattle herds in an enzootic region: modelling contributions of airborne transmission and trade.

Our findings showed that airborne transmission and movement of cows both affected the regional spread of C. burnetii, but with different capacities. On the one hand, airborne transmission had the ability to introduce C. burnetii in a large number of herds, but the generated outbreaks were generally predicted to be ephemeral and small. On the other hand, animal trade was predicted to result in only 8% of new infections; however, purchasing an infectious cow could instigate comparatively larger outbreaks. The differences in the impact of each transmission route on the intra-herd infection dynamics arose from the intrinsic nature of these transmission routes in spreading C. burnetii. Regardless the route, the first generated local infection was always a cow with health status I − as shown in Figure 2. Such a seronegative shedding cow is a transient shedder, which can become susceptible again. Irrespective of the benefits, mechanistic models are generally difficult to fit to data.

WAGENINGEN UNIVERSITY 06/05/14 Land-applied contaminated manure another source of spread of Q fever. Q fever is a zoonosis, an infectious disease that can be transferred from animals to humans. Previous research had shown that there is a spatial relationship between goat farms that were contaminated with Q fever and the incidence of the illness among humans. As expected more people became ill in the vicinity of contaminated farms that those living at a distance from these farms. “But,” says Alterra researcher Tia Hermans, “we saw that living in the vicinity of goat farms could only explain the Q fever contamination in just over 50% of the cases. So there had to be another factor at play here.” Research carried out by the Central Veterinary Institute showed that manure from goats can still be contaminated with Q fever up to a maximum of 3 months after lambing. Epidemiol. Infect. (2015), 143, 3316–3326. Q fever infection in dairy cattle herds: increased risk with high wind speed and low precipitation.