Preventive Veterinary Medicine Volume 194, September 2021, Spatial variation in direct and indirect contact rates at the wildlife-livestock interface for informing disease management. The role of wildlife in the (re)emergence of livestock diseases has been increasing due to global climate change, human encroachment on wildlife habitat, and changes in wildlife distributions and demographics (Jones et al., 2013; Miller et al., 2017; Patz et al., 1996). 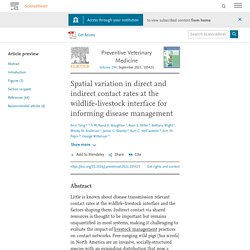 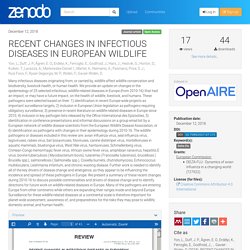 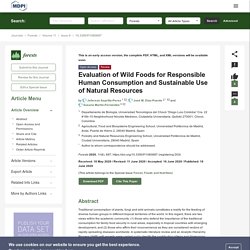 In this regard, there are two views within the academic community: (1) those who defend the importance of the traditional consumption for family food security in rural areas, especially in tropical countries with emerging development; and (2) those who affirm their inconvenience as they are considered vectors of rapidly spreading diseases worldwide. A systematic literature review and an Analytic Hierarchy Process (AHP) with experts were carried out to identify the contributing criteria and dimensions in Science, Technology and Innovation (STI) that help evaluate the potential of wild foods for responsible consumption in terms of human health and nature conservation. Four dimensions were identified. PATHOGENS 13/02/20 Dynamic Network of Interactions in the Wildlife-Livestock Interface in Mediterranean Spain: An Epidemiological Point of View. The correct management of diseases that are transmitted between wildlife and livestock requires a reliable estimate of the pathogen transmission rate. 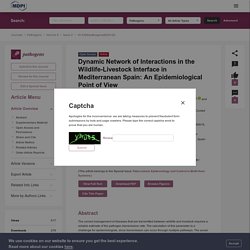 The calculation of this parameter is a challenge for epidemiologists, since transmission can occur through multiple pathways. The social network analysis is a widely used tool in epidemiology due to its capacity to identify individuals and communities with relevant roles for pathogen transmission. In the present work, we studied the dynamic network of interactions in a complex epidemiological scenario using information from different methodologies. FRONT. VET. SCI. 05/03/20 Ethical considerations for wildlife reintroductions and rewilding. OIE - REV.SCI. TECH. OFF. INT. EPIZ. - 2018 - Proposed attributes of national wildlife health programmes.

Rev. Sci. Tech. Off. Int. Epiz., 2016,35(3) Implementing wildlife disease surveillance in the Netherlands, a One Health approach. VETERINARY RESEARCH - 2011 - A survey of the transmission of infectious diseases/infections between wild and domestic ungulates in Europe. Interdisciplinary collaboration is a requisite to the success of management programs. 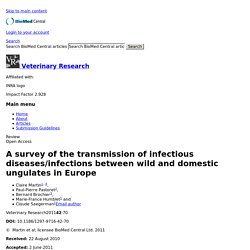 Studies involving biologists, ecologists, veterinarians, epidemiologists and medical doctors should then be promoted. Nevertheless, further research is needed to clearly assess all consequences of the diseases transmitted between wildlife, livestock and humans. A better knowledge of wild populations (size and distribution) of each species should be promoted by applying harmonized methods among the different regions and/or countries. Besides, more studies could be performed in order to understand and analyse the infectious strains circulating among wild animals, but, above all, to compare them to strains circulating among domestic livestock. In most cases, researchers ignore if strains circulating among domestic and wild populations are similar. To focus wildlife surveillance on prioritized agents could lead to a reduced vigilance/surveillance of "old" diseases. BULLETIN UASVM VETERINARY MEDICINE - 2015 - Study on the Wild Boar Meat Contamination with Pathogenic Agents Involved in Foodborne Diseases. 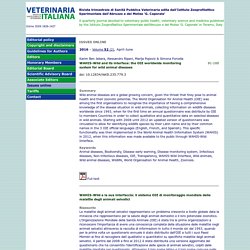 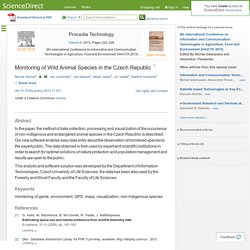 Our new software enables easy data entry about the observation of monitored species to the expert public. This analytic and software solution was developed by the Department of Information Technologies, Czech University of Life Sciences; the data has been also used by the Forestry and Wood Faculty and the Faculty of Life Sciences. Keywords. European Journal of Wildlife Research 01/2014 Effects of the hunting method on meat quality from fallow deer and wild boar and preliminary studies for predicting lipid oxidation using visible reflectance spectra. DEFRA 11/06/15 Wildlife: disease surveillance reports, 2015. AUSTRALIAN WILDLIFE HEALTH NETWORK 02/08/12 Disease Agents Reported in Feral Animals within Australia. European Food Research and Technology April 2014, Detection of roe deer, red deer, and hare meat in raw materials and processed products available in Poland.

To allow detection of meat from the most popular game species in Poland, we developed a PCR-based method for identification of roe deer (Capreolus capreolus), red deer (Cervus elaphus), and hare (Lepus europaeus). 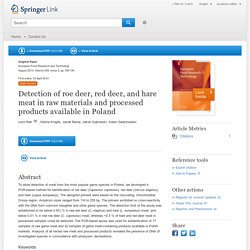 The designed primers were based on the noncoding, mitochondrial D-loop region. Amplicon sizes ranged from 116 to 255 bp. The primers exhibited no cross-reactivity with the DNA from common slaughter and other game species. The detection limit of the assay was established to be below 0.001 % in raw red deer (C. elaphus) and hare (L. europaeus) meat, and below 0.01 % in raw roe deer (C. capreolus) meat, whereas <0.5 % of hare and red deer meat in processed samples could be detected. JOURNAL OF VETERINARY RESEARCH - 2014 - Drivers of disease emergence and spread: Is wildlife to blame? 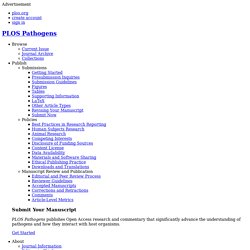 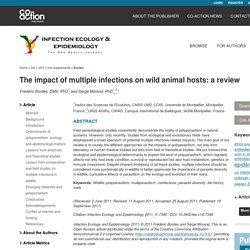 However, only recently, studies from ecological and evolutionary fields have emphasised a broad spectrum of potential multiple infections-related impacts. The main goal of our review is to reunify the different approaches on the impacts of polyparasitism, not only from laboratory or human medical studies but also from field or theoretical studies. We put forward that ecological and epidemiological determinants to explain the level of polyparasitism, which regularly affects not only host body condition, survival or reproduction but also host metabolism, genetics or immune investment.

This report details the findings of a pilot project to establish surveillance methodology for zoonotic agents in confiscated wildlife products.