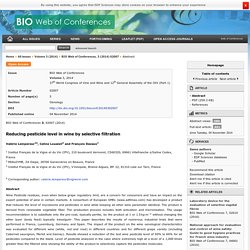 This is an Open Access article distributed under the terms of the Creative Commons Attribution License 4.0, which permits unrestricted use, distribution, and reproduction in any medium, provided the original work is properly cited. Food Control (2010) 1512-1518 Pesticide residues in grapes and during vinification process. Abstract Pesticide residues in vinification process of two white and two red grapevine varieties were monitored during the 2007 vintage. 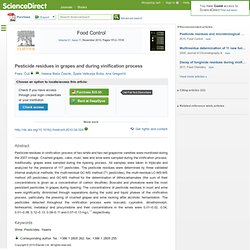 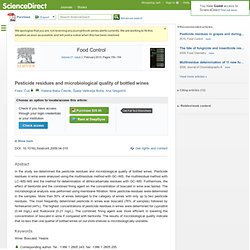 Pesticide residues in wine were analysed using the multiresidual method with GC–MS, the multiresidual method with LC–MS–MS and the method for determination of dithiocarbamate residues with GC–MS. Furthermore, the effect of bentonite and the combined fining agent on the concentration of boscalid in wine was tested. The microbiological analysis was performed using membrane filtration. Nine pesticide residues were determined in the samples. Keywords Wine; Boscalid; Yeasts Copyright © 2009 Elsevier Ltd. GREENPEACE EAST ASIA 01/05/12 The "wine" of China compromised by pesticide use. INTECH - DEC 2010 – Influence of Fungicide Residues in Wine Quality. 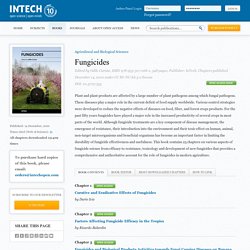 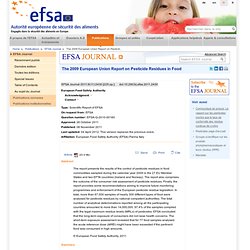 This version replaces the previous one/s. Affiliation: European Food Safety Authority (EFSA) Parma Italy The report gives an overview of the control activities performed in 2009 by the 27 EU Member States and two EFTA countries (Iceland and Norway) in order to ensure compliance of food with the standards defined in European legislation on pesticide residues. Typically, in each European reporting country two control programmes are in place: a national control/monitoring programme (designed by each country) and a coordinated European programme for which clear guidance is given on which specific control activities should be performed by the Member States.

Out of the 138 pesticides tested, measurable residues were found for 111 different substances. MICHIGAN STATE UNIVERSITY 23/09/11 Late-season fungicide sprays in grapes and potential effects on fermentation. Knowing what spray to use, the rate applied and rainfall amount are factors to consider when concerned if applying a late-season fungicide spray in grapes will lead to problems with fermentation. 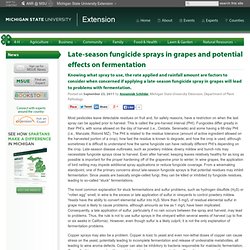 Posted on September 23, 2011 by Annemiek Schilder, Michigan State University Extension, Department of Plant Pathology Most pesticides leave detectable residues on fruit and, for safety reasons, have a restriction on when the last spray can be applied prior to harvest. This is called the pre-harvest interval (PHI). Fungicides differ greatly in their PHI’s, with some allowed on the day of harvest (i.e., Oxidate, Serenade) and some having a 66-day PHI (i.e., Manzate, Ridomil MZ).

The PHI is related to the residue tolerance (amount of active ingredient allowed on the harvested portion of a crop), how fast the residue is known to degrade, and how the crop is used, although sometimes it is difficult to understand how the same fungicide can have radically different PHI’s depending on the crop.