ANTIBIOTICS 09/07/21 Determinants of Antimicrobial Resistance among the Different European Countries: More than Human and Animal Antimicrobial Consumption. All articles published by MDPI are made immediately available worldwide under an open access license. 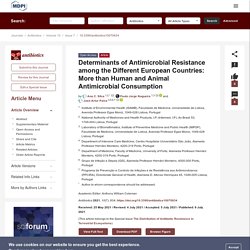 No special permission is required to reuse all or part of the article published by MDPI, including figures and tables. For articles published under an open access Creative Common CC BY license, any part of the article may be reused without permission provided that the original article is clearly cited. Feature Papers represent the most advanced research with significant potential for high impact in the field. Feature Papers are submitted upon individual invitation or recommendation by the scientific editors and undergo peer review prior to publication. The Feature Paper can be either an original research article, a substantial novel research study that often involves several techniques or approaches, or a comprehensive review paper with concise and precise updates on the latest progress in the field that systematically reviews the most exciting advances in scientific literature. FRONT. VET. SCI. 08/07/21 Assessment of Evaluation Tools for Integrated Surveillance of Antimicrobial Use and Resistance Based on Selected Case Studies.

Introduction The importance of combatting antimicrobial resistance (AMR) was highlighted in the Global Action Plan (GAP) released by the World Health Organization (WHO) in 2015 (1). 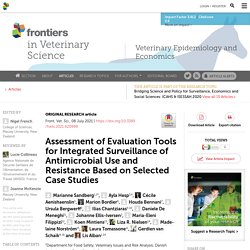 It was further adopted by the Tripartite Collaboration consisting of the members of the WHO, Food and Agriculture Organization of the United Nations (FAO), and the World Organization for Animal Health (OIE) and endorsed by political leaders and the United Nations (UN) General Assembly (2). The Tripartite Collaboration acknowledges that the AMR challenge needs to be addressed using a One Health (OH) approach to reflect that the development and spread of AMR do not respect boundaries between sectors and, therefore, require cross-sectoral collaboration and prevention activities. ANTIBIOTICS 09/04/21 Overview and Evaluation of Existing Guidelines for Rational Antimicrobial Use in Small-Animal Veterinary Practice in Europe. Willows Veterinary Centre and Referral Service, Highlands Road, Shirley, Solihull B90 4NH, UK Veterinary Specialists Scotland, 1 Deer Park Road Livingston, Scotland EH54 8AG, UK Department of Microbiology, Faculty of Veterinary Medicine, Istanbul University-Cerrahpaşa, 34320 Avcılar, Istanbul, Turkey. 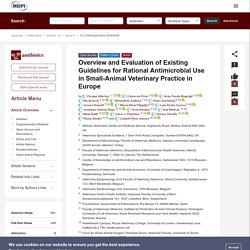 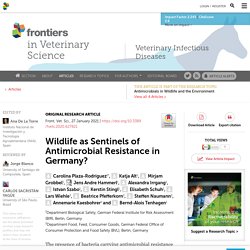 This implies that all underlying economic, social, political, environmental, and biological factors have to be considered in this context (2). Nowadays intensive contact between humans, domestic and wild animals occurs due to the expansion of urban populations and the fragmentation, encroachment and loss of natural habitats. In this scenario, it is of utmost importance to examine AMR through a “One Health” perspective (3–5). This perspective contemplates an integrated and holistic multidisciplinary approach (6), highlighting the importance of a better integration of human, livestock, wildlife and environmental aspects, in order to identify key priorities for combating AMR (2, 5, 7). 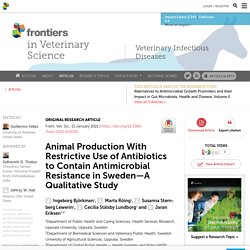 In 2013 ABR was highlighted as one of three global risk cases (3). ABR is not slowing down (4), and efforts to contain ABR are still urgently needed. In 2015 the World Health Organization (WHO) announced a Global Action Plan based on a “One Health” approach (5). One Health implies collaborative efforts between stakeholders at different levels in sectors working with animals, humans, and environment. Efforts to contain ABR began early in Sweden.

Swedish Broiler Industry. FRONT. VET. SCI. 30/10/20 Comparing Farm Biosecurity and Antimicrobial Use in High-Antimicrobial-Consuming Broiler and Pig Farms in the Belgian–Dutch Border Region. Introduction It is estimated that, by 2050, antimicrobial resistance (AMR) could contribute to 10 million human fatalities per year worldwide if no actions are taken (1). 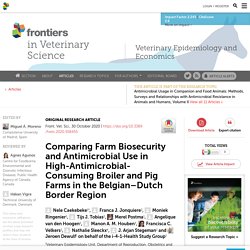 The selection of AMR is largely driven by the (incorrect) use of antimicrobials (AM). As the development of new AM is limited (1, 2), treatment options are diminishing, endangering both human and animal healthcare. The cross-border region of Belgium (Flanders) and the Netherlands is one with abundant movements of both humans and animals, due to high population numbers and intensive pig and poultry production, consequently posing a risk for dissemination of resistant bacteria and resistance genes, as AMR is not bound by country borders. Therefore, a multidisciplinary (One Health) approach needs to be complemented with cross-border cooperation to help understand and control the AMR problem (3). Clinical Microbiology and Infection Volume 24, Issue 6, June 2018, Review of antimicrobial resistance surveillance programmes in livestock and meat in EU with focus on humans. National level At the national level, AMR data contain a great variety in sample origin (diseased or healthy animals), sampling numbers, test methods (dilution or diffusion tests, genetic tests), standardization (EUCAST or CLSI guidelines) and cutoff levels (clinical or epidemiologic cutoffs), which as a result does not allow comparison of resistance data among countries [13], [14], [15]. 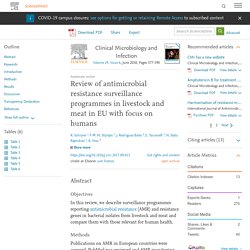 Better harmonization of sampling methods exists for monitoring AMR in E. coli, Enterococcus spp. and Campylobacter spp. Most countries test methicillin-resistant S. aureus (MRSA) prevalence with cefoxitin; some include oxacillin. In addition, some countries try to identify mecA or even mecC genes in MRSA strains, whereas others only focus on the identification of livestock-associated MRSA (ST398). Four countries report only genetic identification of the responsible genes and plasmids, limiting the epidemiologic monitoring of resistance genes [8], [16]. NATURE 18/06/19 Veterinarian ‘responsibility’: conflicts of definition and appropriation surrounding the public problem of antimicrobial resistance in France.

However, this situation changed quite rapidly. 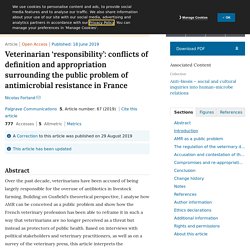 Indeed, the early 2010s were marked by a veterinarian movement to re-appropriate the AMR problem. They succeeded in reversing the stigma and reappeared as part of the solution to the problem, in particular by promoting the notion of ‘responsible use’. The objective was to develop a definition of the legitimate uses of antibiotics in which the veterinary profession plays an essential role. However, this was not a return to the previous state of affairs. The definition developed by the human health coalition finally required that a change in the regulation of veterinary drugs be one of the components of the AMR problem. The first dynamic through which this re-appropriation of the problem took place was a massive demonstration by the veterinary profession against a draft law in favour of decoupling. But the concept of CIAs was relatively unstable at that time as it was subject to relatively strong scientific controversies. 2016 AMR policy.

ECA_EUROPA_EU - 2019 - Addressing antimicrobial resistance: progress in the animal sector, but this health threat remains a challenge for the EU. Front. Vet. Sci., 19/07/19 Exploring perspectives on antimicrobial use in livestock: A mixed-methods study of UK pig farmers. Lucy A. 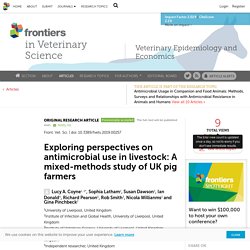 Introduction Reducing antimicrobial use (AMU) in animal production is currently a priority within the Veterinary Public Health sphere. 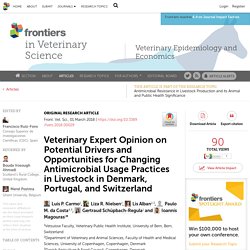 The potential risks for human health associated with AMU in animals have urged European institutions to consider it a critical issue to be addressed in the near future (1–3). On a global scale, veterinary antimicrobial consumption estimates for the future are not optimistic (4). Furthermore, the importance of antimicrobial resistance was underpinned by the recent United Nations high level meeting on antimicrobial resistance.

COMMISSION EUROPEENNE - JUIN 2017 - How EU funding contributes to public health and tackles antimicrobial resistance. DG SANCO 21/08/17 Audit report published - 2017-6200 Gather information on the prudent use of antimicrobials in animals - France (FR) Cookies This site uses cookies to offer you a better browsing experience. Find out more on how we use cookies and how you can change your settings. European Commission Accessibility tools Service tools Language Navigation path Browse section: All Topics News More. DG SANCO 06/06/17 Derniers rapports OAV: Italy 2017-6191 - evaluate the monitoring and reporting of antimicrobial resistance in zoonotic and commensal bacteria in certain food-producing animal populations and food - IT - Italy.

Cookies This site uses cookies to offer you a better browsing experience. Find out more on how we use cookies and how you can change your settings. European Commission Accessibility tools Service tools Language. PARLEMENT EUROPEEN - Réponse à question E-001703-17 Risks from the use of antimicrobials in animals. According to a report by experts from the European Food Safety Authority and the European Medicines Agency, the use of antimicrobials for preventing and treating bacterial infections in animals should be reduced, as antimicrobial resistance (AMR) is one of the most pressing public health issues in the world and the use of such substances in animals contributes to the problem(1). At the same time, they stress that there is a need for innovative solutions that find alternative ways to deal with animal health issues. Data collection on the consumption of antibiotics is considered key to the effectiveness of antimicrobial agents when it comes to public and animal health.

They suggest vaccines, probiotics, prebiotics, bacteriophages and organic acids as possible alternatives, while they concluded that reducing the use of antimicrobial agents would lead to a general reduction in the resistance of bacteria carried by food products. 1. 2. 3. BFR_DE 26/04/17 Antimicrobial resistance: successful interdisciplinary efforts. RESET and MedVet-Staph research networks present results of seven years of research on the development and spread of antimicrobial resistance in humans and animals As antimicrobial-resistant bacteria can be transmitted between humans and animals, research into antimicrobial resistance must in particular investigate the mechanisms of the spread of the bacteria and the resistance genes. This is the finding that will be presented at the final symposium of the RESET and MedVet-Staph research projects from 26 - 28 April 2017 at the Federal Institute for Risk Assessment (BfR). "Antimicrobial-resistant bacteria pose a complex challenge.

Copyright: © 2014 Lavilla Lerma et al. EURACTIV 31/07/15 Antibiotics on animal farms spread deadly pathogens, experts warn. The consistent use of antibiotics in animal farms in Germany are spreading antibiotic-resistant germs and causing experts to call for stricter measures against drugs. EurActiv Germany reports. The latest numbers from the Federal Office of Consumer Protection and Food Security seem to be positive, showing an overall decrease in the use of antibiotics in animal breeding facilities.

In 2014, nearly 1,200 tonnes of medications were used in animal husbandry in Germany – around 15% less than the previous year. Compared to the first data collection in 2011, antibiotic use dropped by more than one-fourth. But according to many experts, the recorded decrease conceals the fact that more and more reserve antibiotics are being administered on animal farms – medications, which are of “great importance for the treatment of specific infections in humans”, according to the World Health Organisation (WHO).