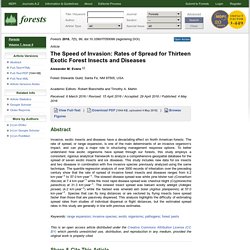 Martin Received: 6 March 2016 / Revised: 15 April 2016 / Accepted: 29 April 2016 / Published: 4 May 2016 Invasive, exotic insects and diseases have a devastating effect on North American forests. The rate of spread, or range expansion, is one of the main determinants of an invasive organism’s impact, and can play a major role in structuring management response options. This is an open access article distributed under the Creative Commons Attribution License (CC BY) which permits unrestricted use, distribution, and reproduction in any medium, provided the original work is properly cited. MDPI and ACS Style Evans, A.M. View more citation formats AMA Style Evans AM. Chicago/Turabian Style Evans, Alexander M. 2016. 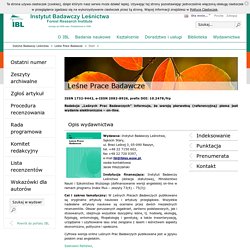 Additionally, projected climate change in combination with multiple, interacting disturbance effects may disrupt the capacity of forests to act as carbon sinks at large spatial and temporal scales. We used a spatially explicit forest succession and disturbance model, LANDIS-II, to model the effects of climate change, gypsy moth (Lymantria dispar L.) defoliation, and wildfire on the C dynamics of the forests of the New Jersey Pine Barrens over the next century. Climate scenarios were simulated using current climate conditions (baseline), as well as a high emissions scenario (HadCM3 A2 emissions scenario). Our results suggest that long-term changes in C cycling will be driven more by climate change than by fire or gypsy moths over the next century. Editor: Michael L. Received: September 5, 2013; Accepted: June 20, 2014; Published: August 13, 2014 Introduction Methods Study Area Figure 1.

Figure 2. MICHIGAN STATE UNIVERSITY 17/11/15 Climate change projections along with expanding invasive pest ranges pose a serious threat to forest. Take the MSU Extension and AgBioResearch Survey to Sharpen Our Focus in English or in Spanish Assessing the climates impact on natural resources indicates warming temperatures will have impacts on our region’s forest resources. 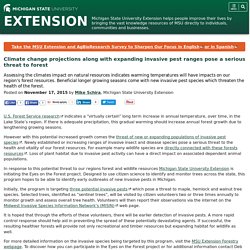 Beneficial longer growing seasons come with new invasive pest species which threaten the health of the forest. JOURNAL OF ENVIRONMENTAL MANAGEMENT - 2014 - Climate change and European forests: What do we know, what are the uncertainties, and what are the implications for forest management? GLOBAL CHANGE BIOLOGY 29/10/15 Model-specification uncertainty in future forest pest outbreak.

Climate change will modify forest pest outbreak characteristics, although there are disagreements regarding the specifics of these changes. 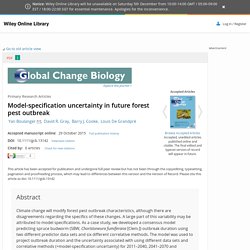 A large part of this variability may be attributed to model specifications. As a case study, we developed a consensus model predicting spruce budworm (SBW, Choristoneura fumiferana [Clem.]) outbreak duration using two different predictor data sets and six different correlative methods. The model was used to project outbreak duration and the uncertainty associated with using different data sets and correlative methods (=model-specification uncertainty) for 2011–2040, 2041–2070 and 2071–2100, according to three forcing scenarios (RCP 2.6, RCP 4.5 and RCP 8.5).

The consensus model showed very high explanatory power and low bias. The model projected a more important northward shift and decrease in outbreak duration under the RCP 8.5 scenario. This article is protected by copyright. Glob Chang Biol. 2014 Jun;20(6):1723-37. Current temporal trends in moth abundance are counter to predicted effects of climate change in an assemblage of subarctic forest moths. 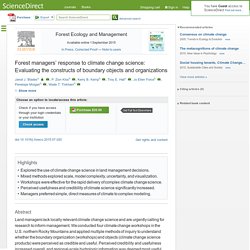 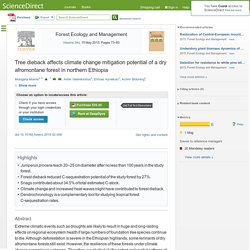 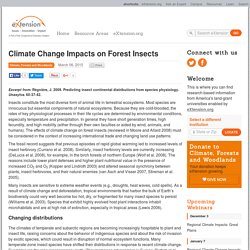 CGIAR 15/12/14 What have we learned about governing agricultural and forest areas to achieve climate change mitigation? Stopping deforestation due to agriculture is difficult, especially with pressures to increase food and commodity production. 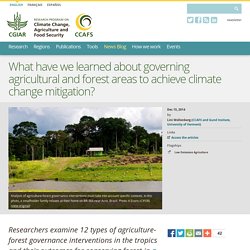 We now understand that intensifying agriculture reduces the amount of total land needed at a global level. But at local levels, agriculture will often expand if it is economic to do so and not otherwise prevented. Hence the need for governing agriculture-forest areas arises in a way that tackles climate change mitigation. To see how improved governance has helped to protect forests in the past, Arun Agrawal, Eva Wollenberg and Lauren Persha conducted a major review of the empirical evidence on this subject, including a meta analysis and the commissioning of papers. 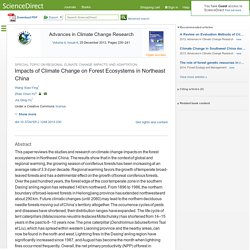 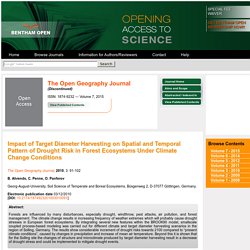 According to Pieter Zuidema and several colleagues in their opinion piece in Trends in Plant Science, research into the effects of climate change on tropical forests should be tackled differently. It should move from mainly descriptive studies towards predictive ones based on a thorough knowledge of relevant processes. Tropical forests cover around 7% of the Earth's surface but contain 25% of global carbon dioxide reserves, as well as contributing to more than 30% of the world’s primary production. "That is why these forests have such an incredibly important effect on CO2 levels in the atmosphere and are decisive in controlling climate change. " Pieter Zuidema said. INRA - 2013 - FFSM: a French forest-wood sector model which takes forestry issues into account in the fight against climate chan.

Forests 2011, 2, 486-504; Emerging Diseases in European Forest Ecosystems and Responses in Society. Forest Ecology and Management 30/10/10 Changing patterns in insect pests on trees in The Netherlands since 1946 in relation to h. Abstract In The Netherlands, insect pests on trees and shrubs are being monitored continuously since 1946. During these years, almost all insect pest populations showed marked changes, which may be the result of changes in forest management, shifts in forest composition, climate change and the arrival of new pests from the Mediterranean region or from other continents.

In order to generate hypothesis about possible relationships between species ecology and environmental factors, we have analyzed 61 years of population development of the 98 most abundant species in the database while paying attention to life history traits and preferred host plants. The 22 species with infestations lasting a few years only were excluded from the analysis. Of the remaining 76 species, 18 were present over the entire observation period of 61 years. Research highlights ▶ We have analyzed an unique nationwide database of 61 year of monitoring of insect pests on trees and shrubs.

Keywords. CAN. J. PLANT PATHOL. - 2007 - Simulating the effects of a climate-change scenario on the geographical range and activity of forest-pathogenic fungi.