PLOS BLOG 18/12/14 Chagas disease is turning up in (un)likely places. Who is ready for it? Hello there! 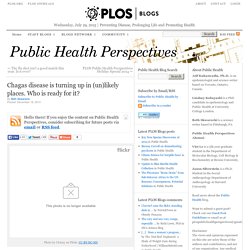 If you enjoy the content on Public Health Perspectives, consider subscribing for future posts via email or RSS feed. Please welcome another guest post by Charles Ebikeme. –Beth Chagas is a more dangerous and much more pervasive disease than we give it credit for. A tropical disease that is really no longer quarantined to the tropics, Chagas has been known to turn up in unlikely places — and those unlikely places are becoming more and more important. Chagas is also known as American trypanosomiasis, and is found mainly in Latin America, where it is mostly transmitted to humans by the faeces of the triatomine “kissing bug”. Recently, researchers at the Center for Clinical Epidemiology and Biostatistics demonstrated that bed bugs can transmit Trypanosoma cruzi, the infectious parasitic agent that causes Chagas disease.

The discovery that bed bugs can transmit Chagas is not the first time the disease has turned up via an unlikely route. Chagas is a real threat. About Charles. PLOS 31/07/14 Acute Chagas Disease: New Global Challenges for an Old Neglected Disease. Abstract Chagas disease is caused by infection with the protozoan Trypanosoma cruzi, and although over 100 years have passed since the discovery of Chagas disease, it still presents an increasing problem for global public health. 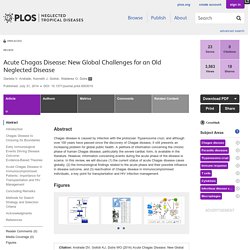 A plethora of information concerning the chronic phase of human Chagas disease, particularly the severe cardiac form, is available in the literature. However, information concerning events during the acute phase of the disease is scarce. In this review, we will discuss (1) the current status of acute Chagas disease cases globally, (2) the immunological findings related to the acute phase and their possible influence in disease outcome, and (3) reactivation of Chagas disease in immunocompromised individuals, a key point for transplantation and HIV infection management. Citation: Andrade DV, Gollob KJ, Dutra WO (2014) Acute Chagas Disease: New Global Challenges for an Old Neglected Disease. Published: July 31, 2014 Copyright: © 2014 Andrade et al. Introduction. PLOS 08/07/15 A Spatio-temporal Model of African Animal Trypanosomosis Risk. 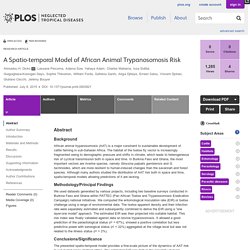 The habitat of the tsetse fly vector is increasingly fragmented owing to demographic pressure and shifts in climate, which leads to heterogeneous risk of cyclical transmission both in space and time. In Burkina Faso and Ghana, the most important vectors are riverine species, namely Glossina palpalis gambiensis and G. tachinoides, which are more resilient to human-induced changes than the savannah and forest species. PLOS 24/03/15 Optimal Strategies for Controlling Riverine Tsetse Flies Using Targets: A Modelling Study. Abstract Background Tsetse flies occur in much of sub-Saharan Africa where they transmit the trypanosomes that cause the diseases of sleeping sickness in humans and nagana in livestock. 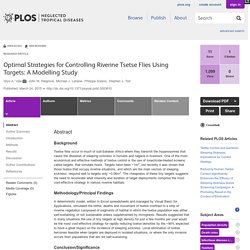 One of the most economical and effective methods of tsetse control is the use of insecticide-treated screens, called targets, that simulate hosts. Targets have been ~1m2, but recently it was shown that those tsetse that occupy riverine situations, and which are the main vectors of sleeping sickness, respond well to targets only ~0.06m2. The cheapness of these tiny targets suggests the need to reconsider what intensity and duration of target deployments comprise the most cost-effective strategy in various riverine habitats. PLOS 26/04/11 Chagas Disease among the Latin American Adult Population Attending in a Primary Care Center in Barcelona, Spain. Abstract Background/Aims The epidemiology of Chagas disease, until recently confined to areas of continental Latin America, has undergone considerable changes in recent decades due to migration to other parts of the world, including Spain. 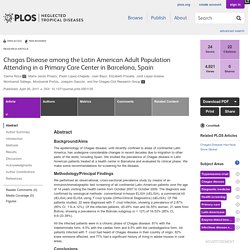 We studied the prevalence of Chagas disease in Latin American patients treated at a health center in Barcelona and evaluated its clinical phase. We make some recommendations for screening for the disease. Methodology/Principal Findings We performed an observational, cross-sectional prevalence study by means of an immunochromatographic test screening of all continental Latin American patients over the age of 14 years visiting the health centre from October 2007 to October 2009. All the infected patients were in a chronic phase of Chagas disease: 81% with the indeterminate form, 9.5% with the cardiac form and 9.5% with the cardiodigestive form. Conclusions. PLOS 27/04/12 Public street lights increase house infestation by Triatoma dimidiata, vector of Chagas disease in the Yucatan pen. PLOS 27/04/12 Public Street Lights Increase House Infestation by the Chagas Disease Vector Triatoma dimidiata.

Triatoma dimidiata is one of the primary vectors of Chagas disease. 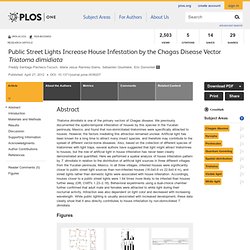 We previously documented the spatio-temporal infestation of houses by this species in the Yucatan peninsula, Mexico, and found that non-domiciliated triatomines were specifically attracted to houses. However, the factors mediating this attraction remained unclear. Artificial light has been known for a long time to attract many insect species, and therefore may contribute to the spread of different vector-borne diseases. Also, based on the collection of different species of triatomines with light traps, several authors have suggested that light might attract triatomines to houses, but the role of artificial light in house infestation has never been clearly demonstrated and quantified. Here we performed a spatial analysis of house infestation pattern by T. dimidiata in relation to the distribution of artificial light sources in three different villages from the Yucatan peninsula, Mexico. 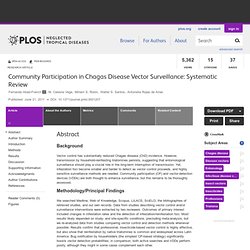 However, transmission by household-reinfesting triatomines persists, suggesting that entomological surveillance should play a crucial role in the long-term interruption of transmission. Yet, infestation foci become smaller and harder to detect as vector control proceeds, and highly sensitive surveillance methods are needed. Community participation (CP) and vector-detection devices (VDDs) are both thought to enhance surveillance, but this remains to be thoroughly assessed. PLOS 11/10/11 Managing Tsetse Transmitted Trypanosomosis by Insecticide Treated Nets - an Affordable and Sustainable Method for.