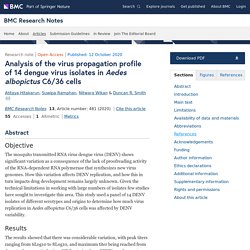 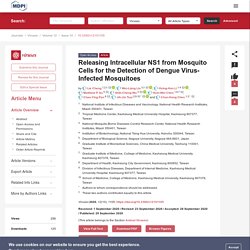 Surveillance of infected mosquitoes is a major component of integrated mosquito control methods for reducing the risk of vector-born disease outbreaks. However, a specialized rapid test for DENV detection in mosquitoes is not currently available. Utilizing immunoblotting, we found that the secretion of NS1 from both a DENV-infected mosquito cell line and mosquito bodies was below the detection threshold. However, when Triton X-100 was used to lyse infected mosquitoes, intracellular NS1 was released, and could then be effectively detected by the NS1 rapid test. J Infect Public Health. 2020 Feb;13 Diagnosis of severe dengue: Challenges, needs and opportunities.

Introduction Dengue is a mosquito-borne viral disease endemic in tropical and subtropical regions around the world. 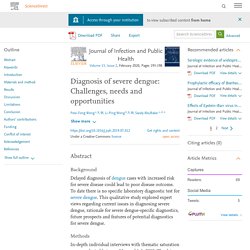 Dengue virus (DENV) is responsible for causing dengue fever (DF), which is an acute febrile illness that is often self-limiting. A small percentage of those who contracted the infection however, developed the severe forms of the infection which could result in severe intravascular leakages, multiple organ failures and deaths [1]. Approximately 3.9 billion people living in 128 countries are at risk of contracting dengue [2]. An estimated 50–100 million cases of apparent infections occurred worldwide annually [3], which resulted in 22,000 deaths [4].

THE SCIENTIST 27/08/20 Zika Infection Increases Risk of Severe Dengue Fever. The 2015–16 Zika virus epidemic that spread through Central and South America was followed last year by a surge in dengue virus cases. 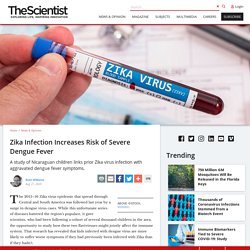 While this unfortunate series of diseases battered the region’s populace, it gave scientists, who had been following a cohort of several thousand children in the area, the opportunity to study how these two flaviviruses might jointly affect the immune system. That research has revealed that kids infected with dengue virus are more likely to suffer worse symptoms if they had previously been infected with Zika than if they hadn’t. The findings, reported in Science today (August 27), indicate that antibody-dependent enhancement—a phenomenon known for making a second infection with a virus worse than the first—is not limited to influencing infections by the same pathogen. This raises concerns that such cross-species effects may occur for other types of viruses—including coronaviruses—and may impact vaccine safety, scientists say.

INTECH 11/07/20 Dengue Virus and the Relationship with MicroRNAs. 1.

Introduction RNA interference (RNAi) is understood as the mechanism of gene silencing through transcription or post-transcription. 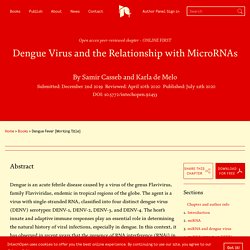 Post-transcription gene silencing (PTGS) operates through translational repression induced by microRNAs (miRNAs), from precursors transcribed in the nucleus [1]. The silencing machinery by microRNAs directs mRNA to the P bodies present in the cytoplasm. They are deprived of the translation machinery and conserve proteins involved in the degradation of the target mRNA [2]. The natural functions of RNAi and their related processes appear to be the protection of the genome against invasion by mobile genetic elements, such as viruses and transposons, as well as the functioning of eukaryotic organism development programs [3, 4]. These analyses led to the identification of proteins encoded by the host involved in gene silencing. 2. miRNA The first miRNA was described in 1993 and related to the regulation of larval development in Caenorhabditis elegans. 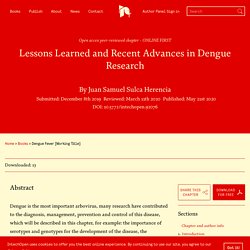 Introduction Dengue is a single systematic and dynamic disease that includes severe and non-severe clinical manifestations [1]. It is caused by any of the four dengue virus serotypes and it is transmitted by Aedes mosquito bites, being the main vector Aedes aegypti [1]. Dengue can be maintained in an urban cycle which involves humans and it is a serious health problem worldwide [1]. For the past decades, this disease has been spread alarmingly due to different factors like climate change, migration of people, tourism, lack of access to basic services, etc. [1, 2]. BIORXIV 12/05/20 Evolution of resistance to fluoroquinolones by dengue virus serotype 4 provides insight into mechanism of action and consequences for viral fitness. PLOS 11/05/20 From importation to autochthonous transmission: Drivers of chikungunya and dengue emergence in a temperate area. Abstract Background The global spread of Aedes albopictus has exposed new geographical areas to the risk of dengue and chikungunya virus transmission. 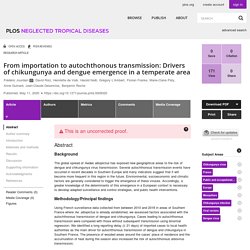 Several autochthonous transmission events have occurred in recent decades in Southern Europe and many indicators suggest that it will become more frequent in this region in the future. Environmental, socioeconomic and climatic factors are generally considered to trigger the emergence of these viruses. Accordingly, a greater knowledge of the determinants of this emergence in a European context is necessary to develop adapted surveillance and control strategies, and public health interventions. 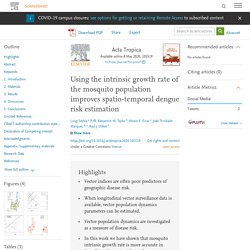 Achee, J.P. Grieco, H. Vatandoost, G. Tropical Medicine and Infectious Disease 31/03/20 Special Issue "Epidemiology of Dengue: Past, Present and Future (Volume II)" Dear Colleagues, Dengue is widespread throughout tropical regions of the world, and its distribution is affected by climate, human behaviour (including urbanisation) and the competence and distribution of its mosquito vector. 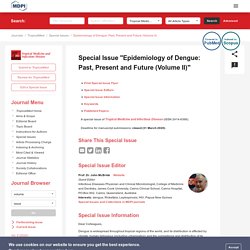 The disease is endemic in many countries and episodically epidemic in still more. Worldwide, the disease is increasing in incidence with more than 300 million cases per year, and more than half the world's population is at risk. This Special Issue of the journal seeks contributions from authors who can advance our understanding of how dengue has emerged, the current extent and clinical impact of the epidemic and how it may behave in the future. We are especially interested in papers that describe the epidemic in the Pacific and Southeast Asian regions. Prof. SCIENTIFIC REPORTS 02/03/20 Silent circulation of dengue virus in Aedes albopictus (Diptera: Culicidae) resulting from natural vertical transmission. BIORXIV 07/02/20 Principles of dengue virus evolvability derived from genotype-fitness maps in human and mosquito cells. Spatially Adjusted Time-varying Reproductive Numbers: Understanding the Geographical Expansion of Urban Dengue Outbreaks.

NATURE 26/11/19 Modified mosquitoes reduce cases of dengue fever - Insects infected with a disease-inhibiting bacterium were released in communities in Asia and South America. Disease-carrying mosquitoes are on the defensive. 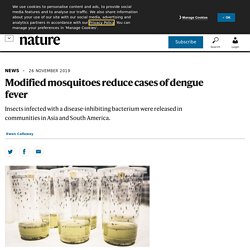 Cases of dengue fever, which is transmitted by the insects, plummeted in areas of Indonesia, Vietnam and Brazil in the months after researchers released Aedes aegypti mosquitoes that were modified to be resistant to dengue virus. The findings, presented on 21 November at the annual meeting of the American Society of Tropical Medicine and Hygiene in National Harbor, Maryland, come from experimental releases of mosquitoes that carry Wolbachia bacteria, which block the replication of mosquito-borne pathogens such as the dengue, chikungunya and Zika viruses. The Wolbachia infection then spreads through local mosquito populations. The efforts were led by the World Mosquito Program (WMP), a global consortium that is testing whether these releases can prevent mosquito-borne diseases.

DIAGNOSTICS 11/07/19 Visual Detection of Dengue-1 RNA Using Gold Nanoparticle-Based Lateral Flow Biosensor. Dengue is a rapidly spreading mosquito-borne viral disease. Early diagnosis is important for clinical screening, medical management, and disease surveillance. The objective of this study was to develop a colorimetric lateral flow biosensor (LFB) for the visual detection of dengue-1 RNA using dextrin-capped gold nanoparticle (AuNP) as label. The detection was based on nucleic acid sandwich-type hybridization among AuNP-labeled DNA reporter probe, dengue-1 target RNA, and dengue-1 specific DNA capture probe immobilized on the nitrocellulose membrane. Positive test generated a red test line on the LFB strip, which enabled visual detection. The optimized biosensor has a cut-off value of 0.01 µM using synthetic dengue-1 target. This is an open access article distributed under the Creative Commons Attribution License which permits unrestricted use, distribution, and reproduction in any medium, provided the original work is properly cited (CC BY 4.0).

NATURE MICROBIOLOGY 10/06/19 The current and future global distribution and population at risk of dengue. To create the 2015 map of environmental suitability for dengue occurrence, we applied an ecological niche modelling approach to establish a multivariate empirical relationship between the probability of dengue presence and the environmental conditions sampled at disease occurrence locations.

Specifically, we used an ensemble boosted regression tree (BRT) methodology, which requires the generation of: (1) a comprehensive compendium of the locations of disease reports in humans; (2) a set of background points representing environmental conditions across the area of interest; and (3) a set of global gridded layers of environmental and socioeconomic covariates known or hypothesized to affect dengue transmission.

Understanding the dynamics of DENV infection and risk modifiers requires knowledge about individual-level infection history, which is usually not fully observed even in pediatric cohort studies. To address this challenge, we developed a statistical approach that combines individual-level data from prospective serological cohorts with surveillance data, which facilitates joint inference of missing or left-censored infection history and epidemiological parameters. Using this approach, we estimated serotype-specific annual risk of infection for children in Managua, Nicaragua, from 1995 to 2009. FAPESP 07/11/18 A biomarker that detects dengue hemorrhagic fever is discovered. Elucidating the mechanism by which dengue virus infection develops into its hemorrhagic form could lead to new treatments and vaccines.

The research was done in Brazil with support from FAPESP (photo: James Gathany / CDC) November 07, 2018. BMC Public Health. 2017; 17(Suppl 1): 426. Coverage and beliefs about temephos application for control of dengue vectors and impact of a community-based prevention intervention: secondary analysis from the Camino Verde trial in Mexico. VIRUSES 18/10/18 Time to Harmonize Dengue Nomenclature and Classification. Int. J. Environ. Res. Public Health 2018, 15(9), 2018; The Sensitivity, Specificity and Accuracy of Warning Signs in Predicting Severe Dengue, the Severe Dengue Prevalence and Its Associated Factors. Int. J. Environ. Res. Public Health 29/08/18 Spatial Clustering of Dengue Fever Incidence and Its Association with Surrounding Greenness. With more than 58,000 cases reported by the country’s Centers for Disease Control, the dengue outbreaks from 2014 to 2015 seriously impacted the southern part of Taiwan. This study aims to assess the spatial autocorrelation of the dengue fever (DF) outbreak in southern Taiwan in 2014 and 2015, and to further understand the effects of green space (such as forests, farms, grass, and parks) allocation on DF.

Article Metrics. PLOS 10/05/18 Seasonal temperature variation influences climate suitability for dengue, chikungunya, and Zika transmission. Abstract Dengue, chikungunya, and Zika virus epidemics transmitted by Aedes aegypti mosquitoes have recently (re)emerged and spread throughout the Americas, Southeast Asia, the Pacific Islands, and elsewhere. Understanding how environmental conditions affect epidemic dynamics is critical for predicting and responding to the geographic and seasonal spread of disease. PLOS 03/05/18 Contributions from the silent majority dominate dengue virus transmission. Abstract Despite estimates that, each year, as many as 300 million dengue virus (DENV) infections result in either no perceptible symptoms (asymptomatic) or symptoms that are sufficiently mild to go undetected by surveillance systems (inapparent), it has been assumed that these infections contribute little to onward transmission. ASTMH - JANV 2018 - Dengue Fever Surveillance in India Using Text Mining in Public Media.

EUROSURVEILLANCE Volume 6 - numéro 39, septembre 2002 - DengueNet - WHO's internet based system for the global surveillance of d.