MANAGEMENT OF BIOLOGICAL INVASIONS 12/01/17 Can ozone be used to control the spread of freshwater Aquatic Invasive Species? NEW SCIENTIST 09/09/16 Global treaty set to halt invasive species ravaging our oceans. ImageBROKER/REX/Shutterstock By Andy Coghlan At last, the game may be up for marine invaders that hitch free rides across the globe in ships’ ballast water. 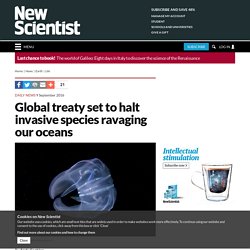 A global convention to stop this happening was formally triggered on 8 September, more than two decades after it was proposed, and will officially come into force a year from then. The convention will compel many of the world’s 70,000 or so registered cargo ships to install equipment guaranteed to kill off any aquatic creatures in seawater taken on board to maintain stability. Advertisement The arrival of the comb jelly (pictured top) in the Black, Azov and Caspian seas from its home on the east coast of North America caused the catastrophic collapse of fisheries in the 1990s.

Crossing in the opposite direction as larvae, zebra mussels (pictured below) have caused an estimated $1 billion worth of damage between 1989 and 2000 in the US Great Lakes by blocking water intake pipes. Article amended on 13 September 2016. RDMAG 11/10/15 Ocean Acidification May Help Invasive Species Rise. An ocean heavily populated by invasive species of algae, jellyfish, crabs and shellfish may be the future if ocean acidification continues. 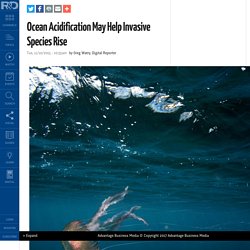 “A rapidly growing body of research indicates that ocean acidification will severely disrupt marine ecosystems, since it alters the balance of success between competing organisms. Ocean acidification can impact a wide range of processes across marine taxa, including photosynthesis, acid-base homeostasis, calcification and behavior,” Plymouth Univ. researchers write in Research and Reports in Biodiversity Studies. However, “the traits that help many invasive organisms succeed, such as wider physiological tolerance and reproductive advantage in the face of multiple stressors, are traits that look set to help them in an acidifying ocean.”

AQUATIC BOTANY 10/06/16 Impacts of climate change on submerged and emergent wetland plants. HAKAI MAGAZINE 24/06/16 Ballast Water Exemptions Are Leaving Alaska Open to Invasion. In 1989, the oil tanker Exxon Valdez ran aground in Alaska, spilling millions of liters of crude oil and killing hundreds of thousands of marine mammals and birds. 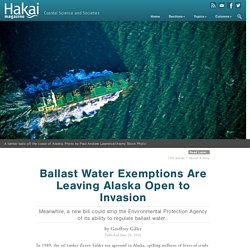 It was one of the worst environmental disasters in history. Alaska’s coast has, fortunately, not seen a repeat event since. But every day, Alaska’s ecosystem is endangered by oil tankers—though in a far more subtle way. Before they travel the world’s oceans, oil tankers and other large ships that are not carrying cargo will suck up as much as tens of millions of liters of water into tanks to help maintain balance and stability. When a tanker reaches port in Alaska and is preparing to take on oil, it will dump this water into the sea. The main problem with ballast water is that ships are often near the shore when they fill their tanks, and are near the shore again when they discharge the water at their destination, which might be thousands of kilometers away. But that will only happen if progress continues. ENVIRONMENTAL EVIDENCE - DEC 2016 - The effectiveness of non-native fish eradication techniques in freshwater ecosystems: a systematic review protocol. DOVEPRESS 13/01/16 Marine biosecurity: protecting indigenous marine species. 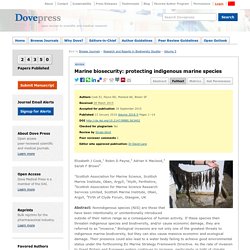 If these species then threaten indigenous species and biodiversity, and/or cause economic damage, they are referred to as “invasive.” Biological invasions are not only one of the greatest threats to indigenous marine biodiversity, but they can also cause massive economic and ecological damage. Their presence could also lead to a water body failing to achieve good environmental status under the forthcoming EU Marine Strategy Framework Directive. Keywords: biosecurity, marine, non-indigenous invasive species, planning, indigenous, protection Introduction Habitat modification. WAGENINGEN UNIVERSITY - Présentation : Risks of introducing non-indigenous species by shellfish transfer.

PLOS 15/04/15 Classification of Non-Indigenous Species Based on Their Impacts: Considerations for Application in Marine Management. Abstract Assessment of the ecological and economic/societal impacts of the introduction of non-indigenous species (NIS) is one of the primary focus areas of bioinvasion science in terrestrial and aquatic environments, and is considered essential to management. 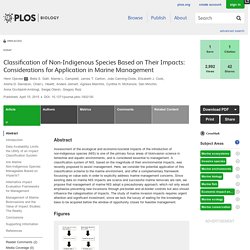 A classification system of NIS, based on the magnitude of their environmental impacts, was recently proposed to assist management. Here, we consider the potential application of this classification scheme to the marine environment, and offer a complementary framework focussing on value sets in order to explicitly address marine management concerns. Since existing data on marine NIS impacts are scarce and successful marine removals are rare, we propose that management of marine NIS adopt a precautionary approach, which not only would emphasise preventing new incursions through pre-border and at-border controls but also should influence the categorisation of impacts. Academic Editor: Isabelle Cote, Simon Fraser University, CANADA. ARCTIC SCIENCE NEWS 30/05/14 Melting Arctic opens new passages for invasive species.

Journal of Experimental Marine Biology and Ecology - 2013 - Cost–benefit of different methods for monitoring invasive corals on tropical rocky reefs in the southwest Atlantic. MEDPAN - NOV 2012 - MARINE ALIEN INVASIVE SPECIES STRATEGY FOR THE MEDPAN NETWORK. Biol. Rev. (2003), 78, pp. 347–383 Mammal invaders on islands: impact, control and control impact. INBO_BE - 2013 - Risk analysis report of non-native organisms in Belgium - American bullfrog Lithobates catesbeianus (Shaw) GRIDA - Invasive species in the marine environment - problem regions. The GRID-Arendal Maps & Graphics Library is an on-going project to collect and catalogue all graphic products that have been prepared for publications and web-sites from the last 15 years in a wide range of themes related to environment and sustainable development. 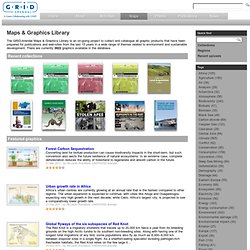 There are currently 3022 graphics available in the database. Forest Carbon Sequestration Converting land for biofuel production can cause biodiversity impacts in the short-term, but such conversion also aects the future resilience of natural ecosystems. In an extreme case, complete deforestation reduces the ability of forestland to regenerate and absorb carbon in the future. 01 Mar 2012 - by Riccardo Pravettoni, UNEP/GRID-Arendal Urban growth rate in Africa Africa’s urban centres are currently growing at an annual rate that is the fastest compared to other regions. RUSSIAN ACADEMY OF SCIENCE - Présentation : Dramatic changes in the Black Sea benthos – impact of alien species. Brown University - MAI 2010 - Patterns of Invasive Species in Tropical Marine Environments. Welcome to ICAIS 16th international conference on aquatic invasive species - final abstracts 2009. GloBallast Partnerships - Home. INVASIVE SPECIES INFO - Ballast Water.