A Word For Christians Who Want To Make America Great Again. I Pet Goat II - Biblical Revelations: Codes Unlocked. What does Bible say about the future of Gaza? Text smaller Text bigger As the focus of the world is now fixed on the Gaza Strip, students of the Bible would do well to stop to consider what the ancient Hebrew prophets had to say about the future of this little piece of land. 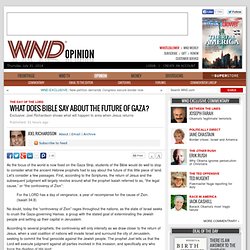 Let’s consider a few passages. Facebook. This Is Insanity. By Chuck Baldwin September 27, 2012 NewsWithViews.com I believe Albert Einstein is credited with saying, "Insanity is doing the same thing over and over again and expecting different results. 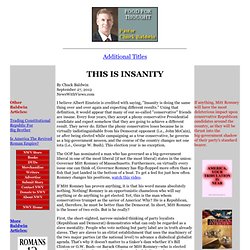 " Using that definition, it would appear that many of our so-called "conservative" friends are insane. Every four years, they accept a phony conservative Presidential candidate and expect somehow that they are going to achieve a different result. They never do. Either the phony conservative loses because he is virtually indistinguishable from his Democrat opponent (i.e., John McCain), or after being elected while campaigning as a true conservative, he governs as a big-government neocon, and the course of the country changes not one iota (i.e., George W. The GOP has nominated a man who has governed as a big-government liberal in one of the most liberal (if not the most liberal) states in the union: Governor Mitt Romney of Massachusetts. Read this report on InfoWars.com. The Book of Enoch, Chapters 1-60.

1 The word of the blessing of Enoch, how he blessed the elect and the righteous, who were to exist in the time of trouble; rejecting all the wicked and ungodly. 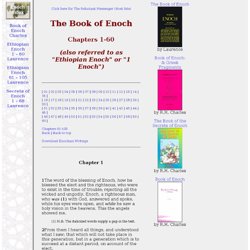 Enoch, a righteous man, who (1) with God, answered and spoke, while his eyes were open, and he saw a holy vision in the heavens. This the angels showed me. 2 From them I heard all things, and understood what I saw; that which will not take place in this generation, but in a generation which is to succeed at a distant period, on account of the elect. 3 Upon their account I spoke and conversed with him, who will go forth from his habitation, the Holy and Mighty One, the God of the world: 4 Who will hereafter tread upon Mount Sinai; appear with his hosts; and be manifested in the strength of his power from heaven. 5 All shall be afraid, and the Watchers be terrified. 6 Great fear and trembling shall seize them, even to the ends of the earth. 1 All who are in the heavens know what is transacted 8 you with the ungodly. 6 Akibeel signs;

Mormonism Research Ministry. By Bill McKeever Although it is not found in any of Mormonism's Standard Works, an expression that precisely defines the LDS teaching that men can become Gods was coined by fifth LDS President Lorenzo Snow. 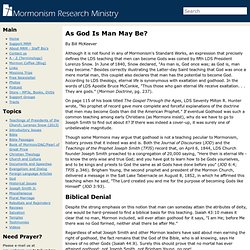 In June of 1840, Snow declared, "As man is, God once was; as God is, man may become. " Besides correctly illustrating the Latter-day Saint teaching that God was once a mere mortal man, this couplet also declares that man has the potential to become God. According to LDS theology, eternal life is synonymous with exaltation and godhood. In the words of LDS Apostle Bruce McConkie, "Thus those who gain eternal life receive exaltation. . .

Isaiah, Chapter 11 (King James Bible) - ChristianAnswers® WebBible™ Douay-Rheims Catholic Bible, Prophecy Of Ezechiel (Ezeckiel) Chapter 17. Douay-Rheims Catholic Bible Verses Search Study Holy Scriptures. James 2:10 For whoever keeps the whole law and yet stumbles at just one point is guilty of breaking all of it. (10) For whosoever shall keep . . . 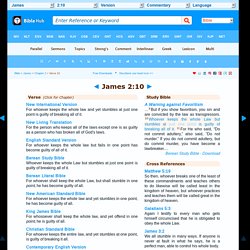