QUADRAM_AC_UK 29/10/20 A bacterial virus helped the spread of a new Salmonella strain (ST34) - Researchers at the Quadram Institute have implicated a toxin-carrying virus in the emergence of a new strain of Salmonella in pigs. Salmonella is associated with a large number of cases of foodborne infection resulting in diarrhoea and in some cases severe complications. 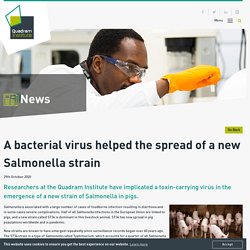 Half of all Salmonella infections in the European Union are linked to pigs, and a new strain called ST34 is dominant in this livestock animal. ST34 has now spread in pig populations worldwide and is pandemic. New strains are known to have emerged repeatedly since surveillance records began over 60 years ago. The ST34 strain is a type of Salmonella called Typhimurium, which accounts for a quarter of all Salmonella infections. 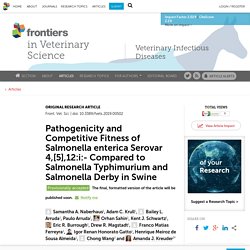 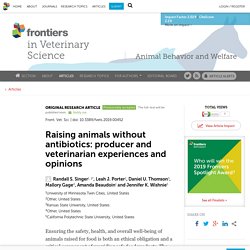 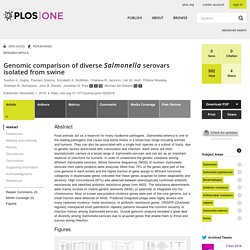 PATHOGENS 29/01/19 Non-typhoidal Salmonella in the Pig Production Chain: A Comprehensive Analysis of Its Impact on Human Health. Salmonellosis remains one of the most frequent foodborne zoonosis, constituting a worldwide major public health concern. 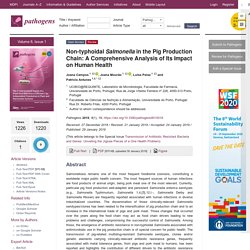 The most frequent sources of human infections are food products of animal origin, being pork meat one of the most relevant. Currently, particular pig food production well-adapted and persistent Salmonella enterica serotypes (e.g., Salmonella Typhimurium, Salmonella 1,4,[5],12:i:-, Salmonella Derby and Salmonella Rissen) are frequently reported associated with human infections in diverse industrialized countries. The dissemination of those clinically-relevant Salmonella serotypes/clones has been related to the intensification of pig production chain and to an increase in the international trade of pigs and pork meat. Those changes that occurred over the years along the food chain may act as food chain drivers leading to new problems and challenges, compromising the successful control of Salmonella. SPANISH JOURNAL OF AGRICULTURAL RESEARCH - 2018 Short communication: Use of a new form of protected sodium butyrate to control Salmonella infection in fattening pigs. 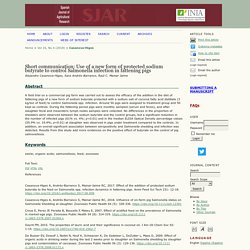 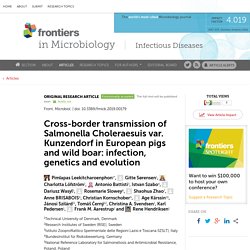 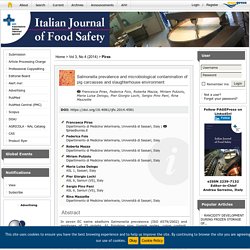 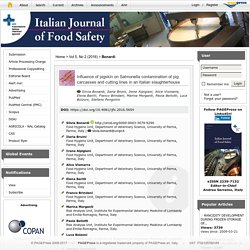 Sampling was performed during seven sessions. Four carcass sites of 100 cm2 each (back, belly, jowl externally, and the diaphragmatic area internally) were swabbed after evisceration. Meat conveyors and dressing tables were tested swabbing areas of 200 to 400 cm2. After pre-enrichment in buffered peptone water, samples were tested by Salmonella MDS® assay and the presumptive positives were confirmed by the ISO 6579 method. Keywords Salmonella enterica; Pig; Dehairing; Carcasses; Food contact surfaces. Preventive Veterinary Medicine 136 (2017) 19–28 Longitudinal study of Salmonella 1,4,[5],12:i:- shedding in five Australian pig herds. The shedding patterns of Salmonella spp. and MLVA profiles of Salmonella enterica subspecies enterica (I) serotype 1,4,[5],12:i:- were monitored in a 12-month longitudinal observational study of five pig herds to inform management; provide indications of potential hazard load at slaughter; and assist evaluation of MLVA for use by animal and public health practitioners. 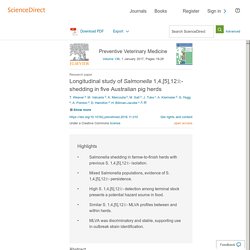 Introduction Since the discovery of sulfonamides in 1932, antimicrobials have been used across the human and animal health sectors to cure infectious diseases. The global rising demand for animal protein for human feeding will potentially lead to a massive increase in AMU in food-animal production, estimated to rise by 67% between 2010 and 2030. However, because of differences between national regulatory frameworks surrounding antimicrobial sales, there are only limited data regarding AMU, particularly in low- and middle- incomes countries (Van Boeckel et al., 2015). In 2012, 26 European Union countries’ average consumption of antimicrobials was respectively 116.4 and 144.0 milligrams per kilogram of estimated biomass in humans and animals (European Centre for Disease Prevention, and Control [ECDC]/European Food Safety Authority [EFSA]/European Medicines Agenc [EMA], 2015).

Methods and Results: Mixtures of antibiotic-resistant mutants of Salmonella species were heat treated at 50, 55 and 60°C in samples of commercial scald tank water. Surviving cell numbers were estimated by plating treated suspensions on (i) tryptone soya agar (TSA) and (ii) on TSA, overlaid with brilliant green agar plus nalidixic acid and streptomycin sulphate and used to estimate D-values for the treated mixed cell suspensions.

Conclusions: A time–temperature combination of 1·4 min at 60°C is required to achieve a 1 log reduction in Salmonella in scald tank water. The predicted equivalent at 65°C is 0·18 min. Introduction Despite wide recognition of the scale and impact of such problems, undesirable human pathogens such as Salmonella continue to penetrate the food chain, and frequently persist into retail meat products. Scald tank water. Procedia Food Science Volume 7, 2016, Estimation of the Risk Associated to Marketing of Swine Meat Contaminated with Salmonella spp., Employing the William T. Fine Method.

-- react-text: 57 -->JavaScript is disabled on your browser. Please enable JavaScript to use all the features on this page. <! PLOS 08/06/17 Evaluation of an enhanced cleaning and disinfection protocol in Salmonella contaminated pig holdings in the United Kingdom. Abstract Salmonella is the second most commonly reported zoonotic gastrointestinal pathogen in the European Union, and a significant proportion of the cases are linked to the consumption of contaminated pork. PIG333 06/03/17 Update on Salmonella control programs - Control programs, which should have started in 2012, have not yet been implemented in most European countries today. The context of Salmonella control; Momentum in the first decade of the 21st century During the first decade of the 21st century, Salmonella became one of the main pathogens to be controlled in pigs. The high number of human cases of salmonellosis, exceededing 200,000 per year at that time in the European Union (EU), and the success, at least in part, of control programs in northern countries led to a series of baseline prevalence studies in poultry and pigs in the EU, the results of which would serve to establish the objectives of future programs for control and reduction of prevalence in each of the Member States.

Cross-sectional studies in breeding and fattening pigs revealed more or less important prevalences in countries with high production and a strong export industry (EFSA, 2008, 2009) (Figure 1A and 1B). However, the control plans, which should have begun in 2012, have still not been implemented in most European countries today. PIGSITE 25/11/16 Salmonella Reduction in Pork Production. Featured Articles. SAFEPORK - 2005 - THE CORRELATION BETWEEN SEROLOGY AND ISOLATION OF SALMONELLA IN PIGS AT SLAUGHTERIN SOUTHERN BRAZIL. Journal of Agriculture, Science and Technology - 2016 - CHARACTERIZATION OF SALMONELLA ISOLATES OBTAINED FROM PIGS SLAUGHTERED AT WAMBIZZI ABATTOIR IN KAMPALA, UGAND. FAO - AOUT 2016 - GUIDELINES FOR THE CONTROL OF NONTYPHOIDAL SALMONELLA SPP. IN BEEF AND PORK MEAT CAC/GL87 - 2016 Adopted 2016.

BMC Veterinary Research 2014, 10:59 Simultaneous infections by different Salmonella strains in mesenteric lymph nodes of finishing pigs. To the best of our knowledge, this is the first report in pigs demonstrating that the same animal may be naturally infected by multiple Salmonella strains. For this, a thorough microbiological analysis of MLN was carried out in a limited number of animals belonging to farms with high salmonellosis prevalence and where multiple circulating Salmonella strain types were previously identified. CODEX ALIMENTARIUS 20/11/15 Food Hygiene progresses with work on Salmonella in Beef and Pork. The Codex Committee on Food Hygiene (CCFH) was established in 1964 to draft basic provisions on food hygiene applicable to all food and prioritize areas where there is a need for microbiological risk assessment at the international level.

PIGSITE 28/01/15 The Link Between Feed and Salmonella in Pigs. Featured Articles. PIG333 03/06/13 Salmonella in wild birds: a risk for swine? Wild birds are possible sources of salmonellosis for humans and other animals. They can become infected with this pathogen from contaminated environments and further transmit it to humans (Figure 1). BMC Veterinary Research 2014, 10:59 Simultaneous infections by different Salmonella strains in mesenteric lymph nodes of finishing pigs. ISRN Veterinary Science Volume 2013 (2013), Investigation of the Distribution of Salmonella within an Integrated Pig Breeding and Production Organisation in the United Kingdom. Page. BELGIQUE : Veterinary Microbiology Volume 171, Issues 3–4, 16 July 2014, Pages 298–306 Antimicrobial susceptibility of Salmonella isolates from healthy pigs and chickens (2008–2011) Volume 171, Issues 3–4, 16 July 2014, Pages 298–306 Special Issue: ARAE 2013, Antimicrobial Resistance of Bacteria from Animals and the Environment Edited By Patrick Butaye, Engeline van Duijkeren, John F.