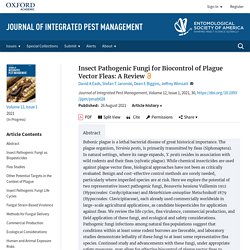 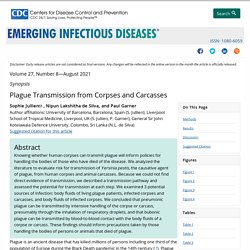 Any changes will be reflected in the online version in the month the article is officially released. NATURE 15/01/20 Evolutionary selection of biofilm-mediated extended phenotypes in Yersinia pestis in response to a fluctuating environment. Characteristics of the surveillance Plague-surveillance work in the Guertu region began in 1964.

Routine surveillance, including the type and distribution of host/vector, host animal density, flea index, and bacteria isolation was performed each year, and the first Y. pestis strain in Guertu was isolated in 1967. 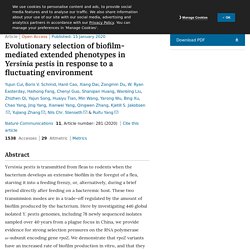 The sentinel site in Guertu was established in 1983. Plague-surveillance staff lived and worked at the sentinel site from May to October each year, when Spermophilus undulatus and Marmota baibacina, the hosts of Y. pestis, emerge from hibernation. Once the sentinel site was established, seropositivity rate was also measured. Biosafety and Health Volume 1, Issue 2, September 2019, Yersinia pestis, a problem of the past and a re-emerging threat. 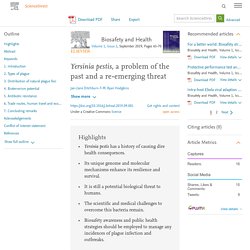 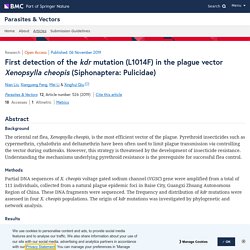 Eight nucleotide polymorphisms in the 369-bp fragments were observed from a total of 111 individuals. No nucleotide variation was observed in the first and last partial exons. One non-synonymous mutation, leading to a deduced amino acid substitution of L (CTT) to F (TTT) at the position corresponding to the amino acid residue 1014 of VGSC of the housefly was detected in the second exon, while other three nucleotide polymorphisms in this exon were synonymous. 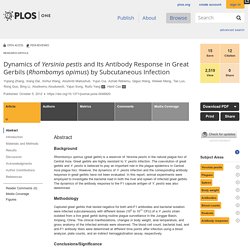 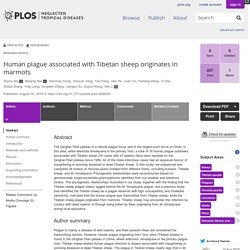 In this area, while Marmota himalayana is the primary host, a total of 18 human plague outbreaks associated with Tibetan sheep (78 cases with 47 deaths) have been reported on the Qinghai-Tibet plateau since 1956. All of the index infectious cases had an exposure history of slaughtering or skinning diseased or dead Tibetan sheep. CDC EID - FEV 2018 - Yersinia pestis Survival and Replication in Potential Ameba Reservoir. Author affiliations: Colorado State University, Fort Collins, Colorado, USA (D.W. 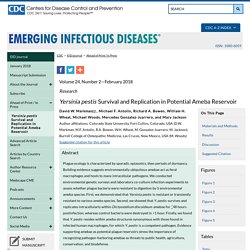 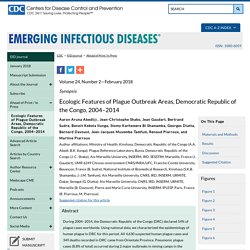 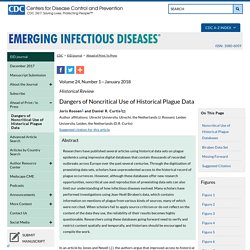 Roosen); Leiden University, Leiden, the Netherlands (D.R. Curtis) Suggested citation for this article Abstract Researchers have published several articles using historical data sets on plague epidemics using impressive digital databases that contain thousands of recorded outbreaks across Europe over the past several centuries. In an article by Jones and Nevell (1), the authors argue that improved access to historical data through digitization projects has benefitted research in different scientific fields. Here we focus on the most frequently used record of historical plague outbreaks in Europe. Biraben had the ambition of constructing a pan-European overview of recurring plague outbreaks, and although his work at the time was an extraordinary feat of scholarship, a complete documentation of the occurrence of plague throughout Europe could not be adequately concluded by any single researcher.

Recording Archaeology VIA YOUTUBE 30/01/17 From Mild to Murderous: How Yersinia pestis Evolved to Cause Pneumonic Plague. ONTARIO VETERINARY COLLEGE via CLINICIANSBRIEF - AVRIL 2017 - Plague in Domestic Cats. ECDC - SEPT 2016 - Annual epidemiological report - Plague. No cases of plague were reported in EU/EEA countries in 2014. ASTMH - SEPT 2017 - Identification of Risk Factors Associated with Transmission of Plague Disease in Eastern Zambia. ASTMH - SEPT 2016 - Reannotation of Yersinia pestis Strain 91001 Based on Omics Data. Adv Exp Med Biol. 09/10/16 Pathology and Pathogenesis of Yersinia pestis. BUSINESSINSIDER 14/08/17 Fleas carrying the bubonic plague have been found in Arizona. CDC 14/09/15 Frequently Asked Questions. What is plague? Plague is an infectious disease that affects rodents, certain other animals, and humans.

It is caused by the Yersinia pestis bacteria. These bacteria are found in many areas of the world, including the United States. How do people become infected with plague? People most commonly acquire plague when they are bitten by a flea that is infected with the plague bacteria. CLINICAL MICROBIOLOGY REVIEWS, Apr. 2004, p. 434–464 Intraspecific Diversity of Yersinia pestis. + Author Affiliations Increased interest in the pathogenic potential of Yersinia pestis has emerged because of the potential threats from bioterrorism.

Pathogenic potential is based on genetic factors present in a population of microbes, yet most studies evaluating the role of specific genes in virulence have used a limited number of strains. For Y. pestis this issue is complicated by the fact that most strains available for study in the Americas are clonally derived and thus genetically restricted, emanating from a strain of Y. pestis introduced into the United States in 1902 via marine shipping and subsequent spread of this strain throughout North and South America. In countries from the former Soviet Union (FSU), Mongolia, and China there are large areas of enzootic foci of Y. pestis infection containing genetically diverse strains that have been intensely studied by scientists in these countries.

Mead ( TRANSBOUNDARY AND EMERGING DISEASES 24/01/17 Wildlife Plague Surveillance Near the China–Kazakhstan Border: 2012–2015. IDAHO DEPARTMENT OF HEALTH & WELFARE - 2015 - FREQUENTLY ASKED QUESTIONS ABOUT PLAGUE. CELL - OCT 2015 - Early Divergent Strains of Yersinia pestis in Eurasia 5,000 Years Ago. INDEPENDENT 15/07/16 Russian boy catches the bubonic plague while hunting in Siberian mountains. A 10-year-old boy caught bubonic plague while hunting with his grandfather in Siberian mountains. The Russian is believed to have caught the potentially deadly disease when he cut himself with a knife while skinning a marmot.

BELOIT DAILY NEWS 16/09/16 Forget about the Bubonic plague: Professor presents on emerging diseases. BELOIT — Don’t kiss a pig. That message and many other fun knowledge nuggets were part of Beloit College professor Rachel Bergstrom’s presentation on emerging public health threats such as Ebola and Zika. She spoke at a Society for Learning Unlimited (SLU) presentation at First Congregational Church on Thursday morning. Bergstrom explained how microbial adaptation, human susceptibility to infection and changing ecosystems are some of many growing factors in the outbreak of disease in a time when antibiotic production is not keeping up with demand.

CDC EID - JUNE 2008 - Persistence of Yersinia pestis in Soil Under Natural Conditions. CDC EID - JUILLET 2011 - Yersinia pestis in Small Rodents, Mongolia. Suggested citation for this article To the Editor: Plague is known to be endemic in several areas of Mongolia, but transmission to humans seems to play only a minor role because the number of recognized cases is relatively low (Figure) (1). The first human cases in Mongolia were reported to the World Health Organization in 1980, and <20 human cases have occurred each year since then (2). CDC EID - FEV 2013 - Au sommaire: Yersinia pestis Plasminogen Activator Gene Homolog in Rat Tissues. PLOS 11/02/16 Two Distinct Yersinia pestis Populations Causing Plague among Humans in the West Nile Region of Uganda. Abstract Background. PLOS 27/03/14 New Insights into How Yersinia pestis Adapts to Its Mammalian Host during Bubonic Plague. Abstract. RT 29/01/14 Scientists find DNA of first-ever bubonic plague, warn of new outbreaks. Trakia Journal of Sciences - 2014 - YERSINIA PESTIS - OLD AND NEW CHALLENGES IN HUMANS AND IN ANIMALS.