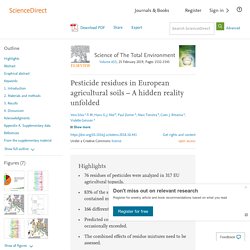 Introduction Pesticides have strongly contributed to the increased food production observed over the last few decades. Since 1960, world average yields of rice, wheat and maize more than doubled as pesticide use increased by 15 to 20 fold, and as fertilizer use, irrigated land and cultivated land increased by 7, 2 and 1 fold, respectively (Oerke, 2006). Globally, around 3 million tons of pesticides are applied annually, corresponding to a market value of USD 40 billion (Pimentel, 2009). 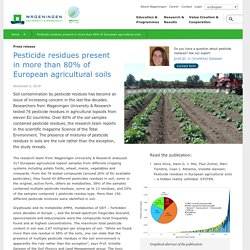 From the 76 tested compounds (around 20% of EU available pesticides), they found 43 different pesticides residues in soil, some in the original, active form, others as metabolites. 58% of the samples contained multiple pesticide residues, some up to 13 residues, and 25% of the samples contained 1 pesticide residue type. EUROPEAN CROP PROTECTION - SEPT 2013 - R&D trends for chemical crop protection products and the position of the European Market. Mutagenesis vol.18 no.3 pp.249–258, 2003 Biomonitoring of four European populations occupationally exposed to pesticides: use of micronuclei as biomarkers. We use cookies to enhance your experience on our website. 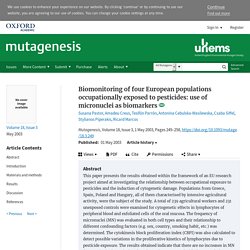 By clicking 'continue' or by continuing to use our website, you are agreeing to our use of cookies. You can change your cookie settings at any time. Skip to Main Content. Agriculture, Ecosystems and Environment 90 (2002) 177–187 Comparison and evaluation of eight pesticide environmental risk indicators developed in Europe and recommendations for future use. Science of the Total Environment 382 (2007) 272–285 Effects of pesticides on community structure and ecosystem functions in agricultural streams of three biogeographical regions in Europe. Toxicology Letters. 03/2002; Food Contamination Metals and Pesticides in the European Union. Should We Worry? Swedish Environmental Research Institute - 2015 - Human exposure to pesticides from food. WE DEMAIN 19/05/15 Une famille se met à manger bio, voici les effets sur sa santé. 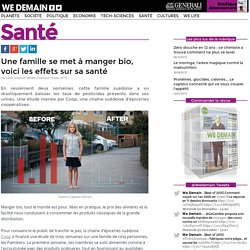 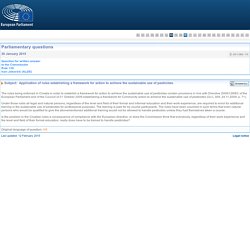 Under those rules all legal and natural persons, regardless of the level and field of their formal and informal education and their work experience, are required to enrol for additional training in the sustainable use of pesticides for professional purposes. The training is paid for by course participants. The rules have been couched in such terms that even natural persons who would be qualified to give the abovementioned additional training would not be allowed to handle pesticides unless they had themselves taken a course. Agriculture, Ecosystems and Environment 90 (2002) 177–187 Comparison and evaluation of eight pesticide environmental risk indicators developed in Europe and recommendations for future use. EUROPEAN CROP PROTECTION ASSOICATION - Présentation : Counterfeit and Illegal Pesticides - A Serious Threat to Food Safety. The desire for less pesticide residues on crops and a reduction in the types of agro-chemicals available to farmers after recent EU legislation is being addressed by new research at SCRI. 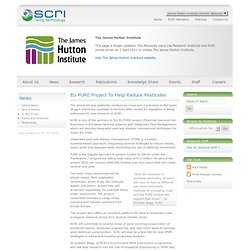 SCRI is one of the partners in the EU PURE project (Pesticide Use-and-risk Reduction in European farming systems with Integrated Pest Management) which will develop integrated pest and disease management techniques for major EU crops. Integrated pest and disease management (IPDM) is a holistic, systems-based approach, integrating several strategies to reduce weeds, insect pests and diseases while minimising the use of pesticide treatments. PURE is the biggest agricultural project funded by the EU under the Framework 7 programme with a total value of €12 million. 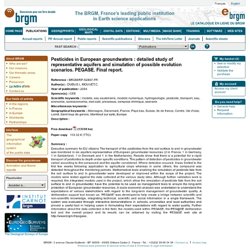 Results show that there is a potential for a rapid transport of pesticides to depth under specific conditions. The pattern of detection of pesticides in groundwater varied according to the compound and the aquifer considered. Where detection occured, it was limited to the first few weeks following application to agricultural crops whereas in some others, the compound was detected throughout the monitoring periods. On average, 4% of the tested food in 2007 exceeded the permitted maximum residue levels (MRL). 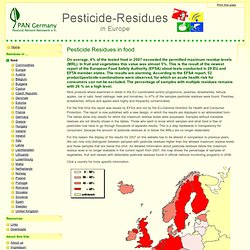 In fruit and vegetables this value was almost 5%. This is the result of the newest report of the European Food Safety Authority (EFSA) about tests conducted in 29 EU and EFTA member states. The results are alarming. According to the EFSA report, 52 product/pesticide-combinations were observed, for which an acute health risk for consumers can not be excluded. The percentage of samples with multiple residues remains with 26 % on a high level. Nine products where examined in detail in the EU coordinated control programme: peaches, strawberries, lettuce, apples, rye or oats, head cabbage, leek and tomatoes. For the first time the report was issued by EFSA and not by the EU-General Direction for Health and Consumer Protection. For this reason the display of the results for 2007 on this website has to be altered in comparison to previous years. 9th European IFSA Symposium, 4-7 July 2010, Vienna (Austria) - A multicriteria decision method assessing the overall sustainabil. 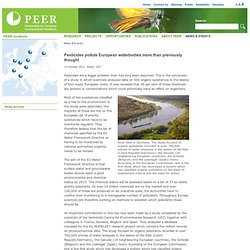 This is the conclusion of a study in which scientists analysed data on 500 organic substances in the basins of four major European rivers. It was revealed that 38 per cent of these chemicals are present in concentrations which could potentially have an effect on organisms. River Elbe in Germany. INTECH - OCT 2011 - Trends in the Exposures to Pesticides in Central Europe. INTECH - JANV 2011 - Pesticide Residues in Agricultural Products of the Slovene Origin Found in 2001-2009. 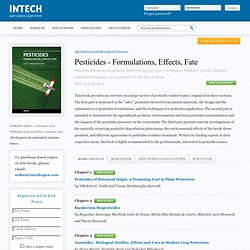 The first part is dedicated to the "safer" pesticides derived from natural materials, the design and the optimization of pesticides formulations, and the techniques for pesticides application. The second part is intended to demonstrate the agricultural products, environmental and biota pesticides contamination and the impacts of the pesticides presence on the ecosystems. The third part presents current investigations of the naturally occurring pesticides degradation phenomena, the environmental effects of the break down products, and different approaches to pesticides residues treatment.