TOXINS 27/07/21 Bacterial Toxins Active against Mosquitoes: Mode of Action and Resistance. Larvicides based on the bacteria Bacillus thuringiensis svar. israelensis (Bti) and Lysinibacillus sphaericus are effective and environmentally safe compounds for the control of dipteran insects of medical importance. 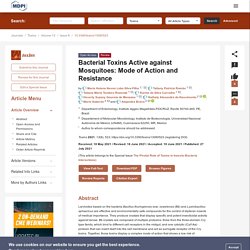 They produce crystals that display specific and potent insecticidal activity against larvae. Bti crystals are composed of multiple protoxins: three from the three-domain Cry type family, which bind to different cell receptors in the midgut, and one cytolytic (Cyt1Aa) protoxin that can insert itself into the cell membrane and act as surrogate receptor of the Cry toxins. Together, those toxins display a complex mode of action that shows a low risk of resistance selection.

L. sphaericus crystals contain one major binary toxin that display an outstanding persistence in field conditions, which is superior to Bti. However, the action of the Bin toxin based on its interaction with a single receptor is vulnerable for resistance selection in insects. ►▼ Show Figures Figure 1. UNIVERSITE DE SORBONNE 21/06/21 Analysis of the "Rolling carpet" strategy to eradicate an invasive species (concerne les moustiques)

VIRUSES 12/05/21 Mosquito-Associated Viruses and Their Related Mosquitoes in West Africa. Mosquito-associated viruses (MAVs), including mosquito-specific viruses (MSVs) and mosquito-borne (arbo)viruses (MBVs), are an increasing public, veterinary, and global health concern, and West Africa is projected to be the next front for arboviral diseases. 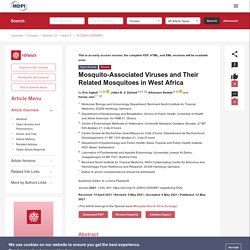 As in-depth knowledge of the ecologies of both western African MAVs and related mosquitoes is still limited, we review available and comprehensive data on their diversity, abundance, and distribution. Data on MAVs’ occurrence and related mosquitoes were extracted from peer-reviewed publications. Data on MSVs, and mosquito and vertebrate host ranges are sparse.

However, more data are available on MBVs (i.e., dengue, yellow fever, chikungunya, Zika, and Rift Valley fever viruses), detected in wild and domestic animals, and humans, with infections more concentrated in urban areas and areas affected by strong anthropogenic changes. Aedes aegypti, Culex quinquefasciatus, and Aedes albopictus are incriminated as key arbovirus vectors. VIRUSES 24/04/21 Host Factors That Control Mosquito-Borne Viral Infections in Humans and Their Vector. Mosquito-borne viral infections are responsible for a significant degree of morbidity and mortality across the globe due to the severe diseases these infections cause, and they continue to increase each year. 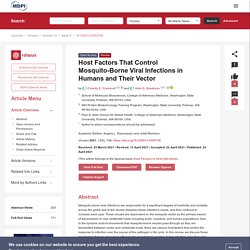 These viruses are dependent on the mosquito vector as the primary means of transmission to new vertebrate hosts including avian, livestock, and human populations. Due to the dynamic host environments that mosquito-borne viruses pass through as they are transmitted between vector and vertebrate hosts, there are various host factors that control the response to infection over the course of the pathogen’s life cycle. In this review, we discuss these host factors that are present in either vector or vertebrate models during infection, how they vary or are conserved between hosts, and their implications in future research pertaining to disease prevention and treatment. View Full-Text ►▼ Show Figures. SCIENTIFIC DATA 13/10/20 A dataset of distribution and diversity of mosquito-associated viruses and their mosquito vectors in China.

Worldwide, mosquitoes have a vast impact on the global public health. 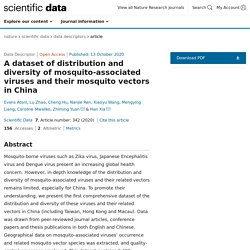 An estimated 3500 species of mosquitoes (family Culicidae) are known to exist, of which some are efficient vectors capable of transmitting various human and animal pathogens1,2,3. Some of these mosquito-borne infectious diseases include Zika, Japanese encephalitis, West Nile fever, Dengue fever and Yellow fever. With an increase in incidence and lack of effective prophylaxis and vaccines for some of these mosquito-borne illnesses, significant outbreaks of these diseases levy a substantial burden on global health and economics in various countries2,4.

Geographically, China is a vast country that comprises of diverse climatic and ecosystems that are favorable to the propagation of arthropod vectors, more especially the mosquitoes. Lately, China has instituted measures and policies that aim to protect, restore and conserve biodiversity5,6,7, thus it is becoming much more conducive for mosquito persistence. Marquette University - 2020 - Thèse en ligne: Machine Learning and Data Mining-Based Methods to Estimate Parity Status and Age of Wild Mosquito Vectors of Infectious Diseases from Near-Infrared Spectra. Abstract Previous studies show that a trained partial least square regresser (PLSR) from near-infrared spectra classify laboratory and semi-field raised mosquitoes into less than or ≥ to seven days old with an average accuracy of 80%. 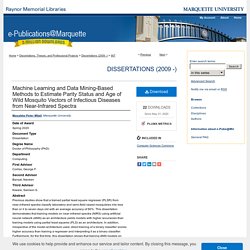 This dissertation demonstrates that training models on near-infrared spectra (NIRS) using artificial neural network (ANN) as an architecture yields models with higher accuracies than training models using partial least squares (PLS) as an architecture. In addition, irrespective of the model architecture used, direct training of a binary classifier scores higher accuracy than training a regresser and interpreting it as a binary classifier. Furthermore, for the first time, this dissertation shows that training ANN models on autoencoded near-infrared spectra yields models that estimate parity status of wild mosquitoes with an accuracy of ≈93%, which is strong enough to support NIRS models as an alternative to ovary dissections. Pathogens. 2020 Apr 23;9(4). Mosquito-Borne Diseases Emergence/Resurgence and How to Effectively Control It Biologically.

Deadly pathogens and parasites are transmitted by vectors and the mosquito is considered the most threatening vector in public health, transmitting these pathogens to humans and animals. 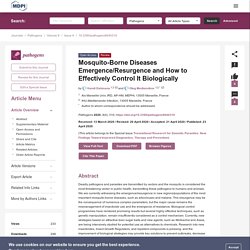 We are currently witnessing the emergence/resurgence in new regions/populations of the most important mosquito-borne diseases, such as arboviruses and malaria. This resurgence may be the consequence of numerous complex parameters, but the major cause remains the mismanagement of insecticide use and the emergence of resistance. Biological control programmes have rendered promising results but several highly effective techniques, such as genetic manipulation, remain insufficiently considered as a control mechanism. Currently, new strategies based on attractive toxic sugar baits and new agents, such as Wolbachia and Asaia, are being intensively studied for potential use as alternatives to chemicals. ►▼ Show Figures. 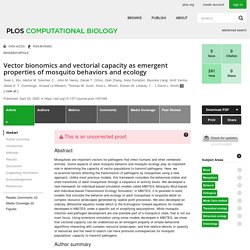 The framework is highly mimetic: simulated mosquito activity is designed to resemble what we believe actual mosquitoes are doing. The descriptions of mosquito behavior in the sections below map onto the structures and algorithms that are built into MBITES. For each simulated mosquito, MBITES samples events and outputs a lifetime trajectory through behavioral state space as well as spatial location. The framework accommodates differences in behavioral algorithms and life-history traits across species, different ecological contexts, and different purposes.

PARASITES & VECTORS 19/02/20 A potential global surveillance tool for effective, low-cost sampling of invasive Aedes mosquito eggs from tyres using adhesive tape. JOURNAL OF MEDICAL ENTOMOLOGY 25/12/19 Evaluation of Novel Trapping Lures for Monitoring Exotic and Native Container-Inhabiting Aedes spp. (Diptera: Culicidae) Mosquitoes. We use cookies to enhance your experience on our website.By continuing to use our website, you are agreeing to our use of cookies. 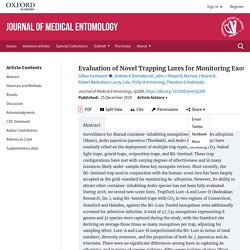 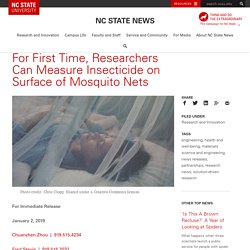 Shared under a Creative Commons license. Insecticide-infused mosquito netting is in widespread use around the world to limit the spread of mosquito-borne diseases, such as malaria. Researchers from North Carolina State University and the U.S. Centers for Disease Control and Prevention (CDC) have now come up with a technique that actually measures how much insecticide is found on the surface of these nets – paving the way for efforts to determine how long the nets are effective. “Until now, there was no established technique for measuring the distribution and concentration of insecticides on the surface of the netting,” says Chuanzhen Zhou, a researcher scholar at NC State’s Analytical Instrumentation Facility (AIF) and co-author of a paper on the work. “This has worldwide impact,” Stevie says. The researchers began by focusing on permethrin, one of the most widely-used insecticides used in netting. 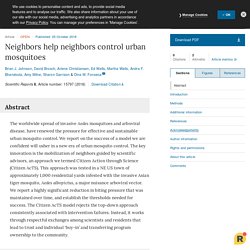 This has been highlighted by the failures of vertically structured (top-down), government-led programs to control epidemic dengue1 and the spread of chikungunya and Zika viruses2. While worldwide, government and non-government organizations are increasing their use of citizen volunteers for large scale surveillance and other high-labor activities3,4, the use of active citizen participants in mosquito control is currently largely nonexistent likely because they have seldom been successful5,6. However, urban mosquitoes whose immatures develop almost exclusively in small containers in residential yards difficult to access and treat by state or county professionals7, are an especially logical target for citizen efforts.

Environmental Entomology, Volume 44, Issue 5, 1 October 2015, Impact of an Alien Invasive Shrub on Ecology of Native and Alien Invasive Mosquito Species (Diptera: Culicidae) JOURNAL OF MEDICAL ENTOMOLOGY 18/09/18 Argemone mexicana (Papaverales: Papavaraceae) as an Alternative for Mosquito Control: First Report of Larvicidal Activity of Flower Extract. NATURE SCIENTIFIC REPORTS 07/07/16 Importance of mosquito ”quasispecies” in selecting an epidemic arthropod-borne virus. International Journal of Mosquito Research 2016;3(4):48-49 Mixture of olive oil and Aloe vera gel: A natural mosquito repellent and a skin moisturizer. Parasites & Vectors 13/01/17 Diversity in breeding sites and distribution of Anopheles mosquitoes in selected urban areas of southern Ghana. Although about 83% of habitats identified were breeding places for different types of mosquitoes, Anopheles mosquito larvae were found in only 49% of them and the frequency of seeing a habitat harbouring Anopheles larvae in AMA was 1.7 times higher than in STMA.

These variations may be due to the differences in the quality of water, that is, the physical, chemical and biological compositions of the water in the various habitats [25, 26, 27]. The data also revealed that Anopheles mosquito habitats were very diverse in the two cities. The diversity of the habitats is obviously due to the improper execution of developmental projects, lack of maintenance and poor environmental management that characterize many cities in developing countries. THEATLANTIC 24/08/17 The Case for Sharing All of America's Data on Mosquitoes.

For decades, agencies around the United States have been collecting data on mosquitoes. Biologists set traps, dissect captured insects, and identify which species they belong to. They’ve done this for millions of mosquitoes, creating an unprecedented trove of information—easily one of the biggest long-term attempts to monitor any group of animals, if not the very biggest. The problem, according to Micaela Elvira Martinez from Princeton University and Samuel Rund from the University of Notre Dame, is that this treasure trove of data isn’t all in the same place, and only a small fraction of it is public.

The rest is inaccessible, hoarded by local mosquito-control agencies around the country. Currently, these agencies can use their data to check if their attempts to curtail mosquito populations are working. BMC BUGBITTEN 04/08/17 Mosquitoes and the biocontrol agent Wolbachia. The yellow fever mosquito, Aedes aegypti. Source: Wikipedia Facilitated by increasing global mobility, urbanisation, climate change, and the development of insecticide resistance, populations of the yellow fever mosquito, Aedes aegypti, are increasing in range and size.

This spread includes their recent re-emergence in parts of Europe after their disappearance in the mid-20th century and is of particular concern due to their role as the transmitters of viral diseases such as yellow fever, dengue, chikungunya and Zika. A successful eradication programme was conducted in Brazil in the 1940s and 50s; however, within 30 years A. aegypti populations were re-established. Biodivers Data J. 2015; (3): e4567. Updated list of the mosquitoes of Colombia (Diptera: Culicidae) Acta Tropica Volume 143, March 2015, Barcoding Turkish Culex mosquitoes to facilitate arbovirus vector incrimination studies reveals hidden diversity and new potential vectors. Open Access Highlights DNA barcoding reveals three new Culex species in Turkey. The species ‘Cx. Territans’ comprises two species in Turkey. Culex quinquefasciatus is confirmed from Turkey for the first time. Int. J. Environ. Res. Public Health 2016, 13(11), 1150; Structure, Spatial and Temporal Distribution of the Culex pipiens Complex in Shanghai, China.

There are many ways to prevent mosquito-borne diseases – insecticides to kill mosquitoes, vaccines to prevent infection and healthy doses of insect repellent before heading off for fishing trips. But while each of these strategies can play a part, where we live and how we build our communities may have an even greater effect. More than 5,000 Australians are struck down with mosquito-borne disease every year, mostly caused by the Ross River or Barmah Forest viruses. The La Nina conditions along eastern Australia in recent years have also brought with them the re-emergence of the potentially fatal Murray Valley encephalitis virus. There’s much discussion about the potential impact of climate change on mosquito-borne disease risks but, in fact, urbanisation will influence the activity of zoonotic diseases (diseases passed from animals to humans) even more by disturbing local ecosystems and biodiversity.