TrAC Trends in Analytical Chemistry Available online 27 May 2019 Bird feathers as a biomonitor for environmental pollutants: prospects and pitfalls. M. 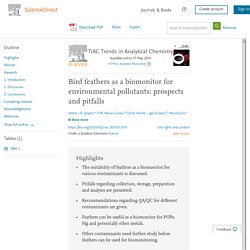 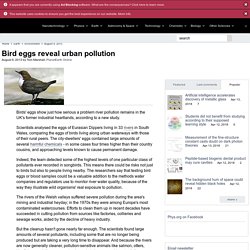 Scientists analysed the eggs of Eurasian Dippers living in 33 rivers in South Wales, comparing the eggs of birds living along urban waterways with those of their rural peers. The city-dwellers' eggs contained large amounts of several harmful chemicals - in some cases four times higher than their country cousins, and approaching levels known to cause permanent damage. Indeed, the team detected some of the highest levels of one particular class of pollutants ever recorded in songbirds. This means there could be risks not just to birds but also to people living nearby. The researchers say that testing bird eggs or blood samples could be a valuable addition to the methods water companies and regulators use to monitor river water quality, because of the way they illustrate wild organisms' real exposure to pollution.

More information: Morrissey, C. et al. EMERGING HEALTH THREATS JOURNAL Vol 3 (2010) The landscape of international event-based biosurveillance. COST - Agricultural Bio-Markers for Array Technology. The aim of the Action was to constitute a European network of laboratories with similar interests that collaborate in the evaluation of the suitability of the developed array-products on a pan-European scale. 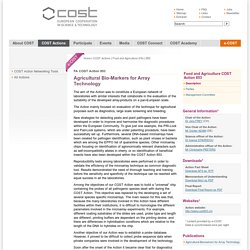 The Action mainly focused on evaluation of the technique for agricultural purposes such as diagnostics, large scale screening and breeding. New strategies for detecting pests and plant pathogens have been developed in order to improve and harmonise the diagnostic procedures within the European Community. To give just one example, the PRI-Lock and Pad-Lock systems, which are under patenting procedure, have been successfully set up. Furthermore, several DNA-based microarrays have been created for pathogen identification, such as plant viruses or bacteria which are among the EPPO list of quarantine species. 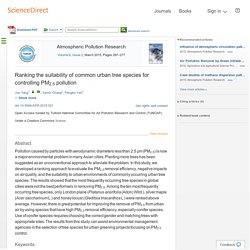 Planting more trees has been suggested as an unconventional approach to alleviate the problem. In this study, we developed a ranking approach to evaluate the PM2.5 removal efficiency, negative impacts on air quality, and the suitability to urban environments of commonly occurring urban tree species. The results showed that the most frequently occurring tree species in global cities were not the best performers in removing PM2.5. PEERJ 04/06/15 Assessment of water pollution in the Brazilian Pampa biome by means of stress biomarkers in tadpoles of the leaf frog Phyllomedusa iheringii (Anura: Hylidae) BMC Microbiology 2011, 11:132 A species independent universal bio-detection microarray for pathogen forensics and phylogenetic c. 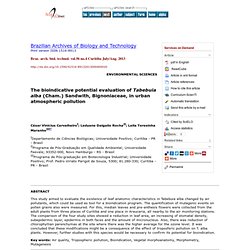 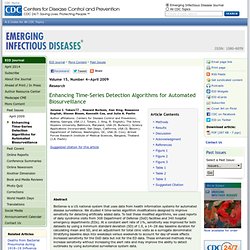 Tokars , Howard Burkom, Jian Xing, Roseanne English, Steven Bloom, Kenneth Cox, and Julie A. Pavlin Author affiliations: Centers for Disease Control and Prevention, Atlanta, Georgia, USA (J.I. Tokars, J. Suggested citation for this article Abstract BioSense is a US national system that uses data from health information systems for automated disease surveillance. Since the late 1990s, the threats of bioterrorist attacks, the potential for outbreaks of natural disease such as severe acute respiratory syndrome and pandemic influenza, and the availability of computerized data have prompted the use of automated disease surveillance systems (1). BioSense is a US national automated surveillance system that receives data from various sources and makes them available for public health use. The C2 algorithm uses a sliding baseline of 7 consecutive recent days’ counts to calculate a mean (µ) and SD (st). 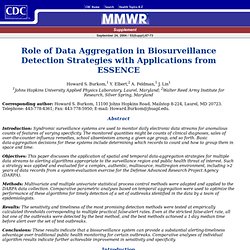 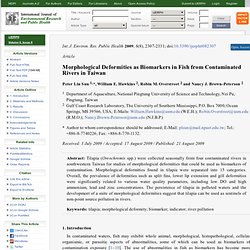 Introduction In contaminated waters, fish may exhibit whole animal, morphological, histopathological, cellular, organismic, or parasitic aspects of abnormalities, some of which can be used as biomarkers of contamination exposure [1–10]. The use of abnormalities in fish as biomarkers has become more prevalent in recent years [6,11–17]. Biomarkers in fish can provide a chronic indication the environmental condition than can more general and acute indices such as plankton analyses or water quality parameters.

However, the cause-and-effect relationships between biomarkers and certain suspected pollutants cannot always be established [18]. Assessing morphological deformities is one of the most straightforward methods to study the effects of contamination on fish because of the ease of recognition and examination when compared with other types of biomarkers. 3. 3.1. The physical-chemical characteristics of the four rivers and their sampling stations are listed in Table 1. HEALTH RESEARCH FOR ACTION - SEPT 2011 - Biomonitoring: The Chemicals Within Us. J. Environ. Monit., 2008 Spatial biomonitoring of persistent organic pollutants in Iran: a study using locally produced butter.