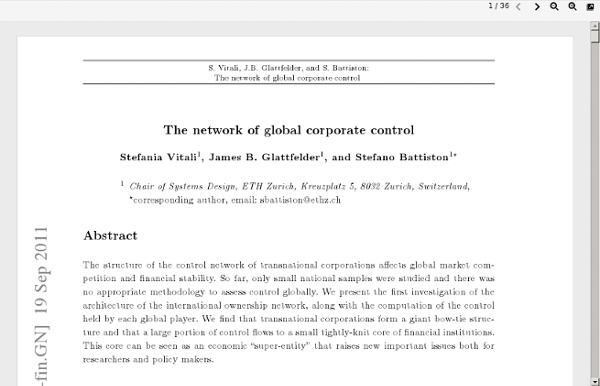 The One Percent Props to New Scientist for highlighting this report, which identifies a network of 147 tightly clustered entities that control 40 percent of the world's wealth. The top 20 included Barclays Bank, JPMorgan Chase & Co, and The Goldman Sachs Group. Here's the direct link to the study, found in PloS One: The network of global corporate control From my perspective, not only is the concentration of ownership exceptionally dangerous (as Cory Doctorow says, "one disaster could sweep like wildfire across them all") it is also deeply undemocratic. These companies and their directors answer to nobody, and there is no electoral process to unseat them. The article explains: "The idea that a few bankers control a large chunk of the global economy might not seem like news to New York's Occupy Wall Street movement and protesters elsewhere (see photo). "From Orbis 2007, a database listing 37 million companies and investors worldwide, they pulled out all 43,060 TNCs and the share ownerships linking them.

Retort: The 147 Companies That Run The World? They're You. Fascinating post by colleague Bruce Upbin on the dominant ownership position of the “147 companies that control everything.” But I think there is basic flaw in the thinking of the underlying study, which as Bruce notes comes from three systems theorists at the Swiss Federal Institute of Technology in Zurich, and which was picked up by the magazine New Scientist. So, here’s the issue. We have met the enemy, as Walt Kelly once wrote in the comic strip Pogo, and he is us. Most of the companies on the top 50 list are simply investment companies – they aren’t operating companies. (The only obvious example is #50 China Petrochemical.) Consider a few tidbits: According to the Investment Company Institute, a trade group for the mutual funds industry, as of the end of August, mutual funds held $11.6 trillion in assets. And wait, a few more stats: 51.6 million U.S. households own mutual funds; they are held by 90.2 million individuals. 44% of U.S. households are fund investors.

Economists and Democracy by Dani Rodrik Exit from comment view mode. Click to hide this space CAMBRIDGE – I have been presenting my new book The Globalization Paradox to different groups of late. By now I am used to all types of comments from the audience. But at a recent book-launch event, the economist assigned to discuss the book surprised me with an unexpected criticism. Lest the message be lost, he then illustrated his point by reminding the audience of “the former Japanese minister of agriculture who argued that Japan could not import beef because human intestines are longer in Japan than in other countries.” The comment drew a few chuckles. But the remark had a more serious purpose and was evidently intended to expose a fundamental flaw in my argument. This criticism reflects a serious misunderstanding of how markets really function. Consider all that is required. Well-functioning markets are always embedded within broader mechanisms of collective governance. But this scenario is neither relevant nor desirable.

RT @thinkshrink: Excellent post on Paxil (Seroxat in UK) with emphasis on "discontinuation syndrome" I suspect many adolescents... http: ... These 6 Corporations Control 90% Of The Media In America An Overview of Participatory Action Research Purpose of Activity: This activity is designed to challenge the stereotypes that are commonly held about research and researchers in order to reframe research as a process in which everyone can and should participate. Participants will be introduced to the basic philosophy behind Participatory Action Research: that those most impacted by an issue should be able to design and conduct research about their community. By the End of Activity Participants Will: Be able to break down stereotypes about research and expertiseLearn that various types of knowledge exist within the groupLearn that community knowledge and research is critical to changing policy and building power Materials Needed: Paper Writing utensils Poker chips (or pennies, paper clips, or jelly beans) Butcher paper with definitions of types of knowledge Key Terms: Community knowledge Knowledge from experience Academic knowledge Intended Participants: Members and staff of your organization Time Needed: 45 minutes Facilitator Instructions: 1. 2.

‘ePortfolios’ are out, ‘bPortfolios’ are in (apparently) #ePortfolio #bPortfolio Whilst waiting for my iOS5 update to proceed I did quite a bit of reading, and one item that caught my eye was this post called “At Last – Recognition for Blog-based Portfolios” by Jim Shimabukuru, which reported on an academic paper written by a group of 6 US professors – “bPortfolios: Blogging for Reflective Practice“. The abstract for the academic paper is: “Web 2.0 technology, such as blogging, allows for locally developed, cost effective, and holistic alternative portfolio assessment systems. By enhancing critical reflection and fostering social interaction, blogging portfolios are seen as an integral learning tool for all students enrolled in a university program.” Quite what the difference is, for the student’s final portfolio, between the blog and portfolio edition is still not clear yet, but it is obviously an alternative solution, and one that ought to be considered. The highlights of using a blogging system (like WordPress) as the portfolio system are:

“There is nothing we can do” – Meadows | Damn the Matrix FORMAT interviews Dennis Meadows, author of “The Limits to Growth”, about the shocking position of the planet. 40 years ago, Dennis Meadows presented the best seller “The Limits to Growth”. In it, he predicted, not the exact date of the apocalypse, but the U.S. researchers showed by means of computational models, that by mid-century, the resources of planet Earth will be depleted. The book sold 30 million copies and Meadows is now regarded as the most famous “Sunset prophet” of the world. FORMAT’s writer Rainer Himmelfreundpointner met Meadows on a visit to Vienna for an exclusive interview. FORMAT: Mr. Meadows: What we meant in 1972 in “The Limits to Growth”, and what is still true, is that there is simply no endless physical growth on a finite planet. FORMAT: In your 13 scenarios the end of physical growth begins – that is, the increase in world population, its food production, or whatever else they produce or consume – between 2010 and 2050. Meadows: Yeah. Meadows: I don’t either.

"Unsourcing" - does free labour ultimately require free goods too? Crowdsourcing has been discovered by the corporate sector, The Economist tells us, as a great way to turn consumers into free labour. "Unsourcing", is the McKinsey-speak for the method pioneered by Wikipedia (and adopted by openDemocracy). But what are the system-wide implications of this move? Where will income to buy products come from once products are made by free labour? A recent ‘Babbage’ column in The Economist writes about the phenomenon of ‘unsourcing’. “Some of the biggest brands in software, consumer electronics and telecoms have now found a workforce offering expert advice at a fraction of the price of even the cheapest developing nation...it is their customers themselves...." Clarifying the janus-faced nature of networked forms of collective action within post-Fordism is essential for those who wish to understand its possibilities for positive change. On the employment of crowdsourcing in the interests of profit, Christian Marazzi writes, He adds, Accelerating the Crisis

RT @riazdharamshi: When Allyson Pollock talks, the NHS should listen HT @clarercgp @mellojonny Health and Social Care Bill 2011 House of Lords – Committee stage, 25 October 2011 BRIEFING ON CLAUSE 1Prepared by Allyson Pollock, professor of public health research and policy, Queen Mary, University of London David Price, senior research fellow, Queen Mary, University of London Peter Roderick, public interest lawyer Tim Treuherz, retired head of legal services, Vale of White Horse District Council 22 October 20111. Introduction The Committee stage of the Health and Social Care Bill begins on Tuesday 25 October 2011, with consideration of Clause 1. Clause 1 impacts on the legal framework underpinning a comprehensive and universal national health service. The briefing is intended to assist peers supporting any of the amendments designed to restore the current statutory framework, although our preferred option is to omit Clause 1 and revert to the wording of the National Health Service Act 2006. [The briefing does not discuss the various amendments that have been tabled to Clause 1. 2. 3.