From Bigger, Towards Better 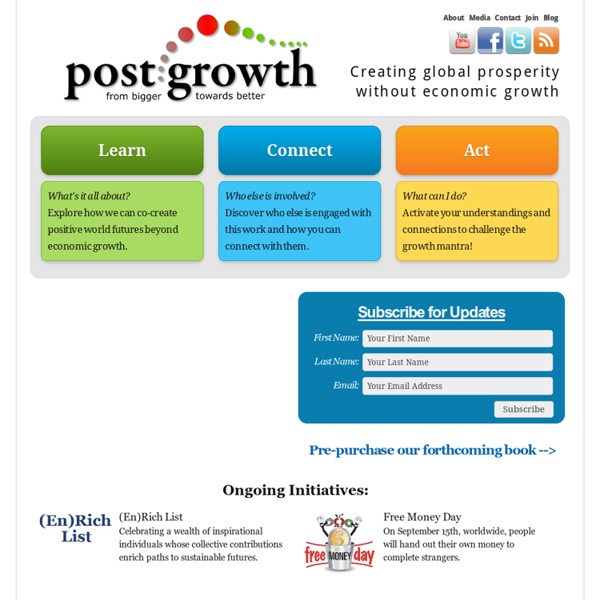 Finally, a breakthrough alternative to growth economics – the doughnut | George Monbiot | Opinion So what are we going to do about it? This is the only question worth asking. But the answers appear elusive. Faced with a multifaceted crisis – the capture of governments by billionaires and their lobbyists, extreme inequality, the rise of demagogues, above all the collapse of the living world – those to whom we look for leadership appear stunned, voiceless, clueless. Even if they had the courage to act, they have no idea what to do. The most they tend to offer is more economic growth: the fairy dust supposed to make all the bad stuff disappear. You can see the effects in a leaked memo from the UK’s Foreign Office: “Trade and growth are now priorities for all posts … work like climate change and illegal wildlife trade will be scaled down.” We cannot hope to address our predicament without a new worldview. Raworth points out that economics in the 20th century “lost the desire to articulate its goals”. The central image in mainstream economics is the circular flow diagram.

Why resource-rich countries usually end up poor Photo by Walter Astrada/AFP/Getty Images. New discoveries of natural resources in several African countries—including Ghana, Uganda, Tanzania, and Mozambique—raise an important question: Will these windfalls be a blessing that brings prosperity and hope, or a political and economic curse, as has been the case in so many countries? On average, resource-rich countries have done even more poorly than countries without resources. They have grown more slowly and with greater inequality—just the opposite of what one would expect. After all, taxing natural resources at high rates will not cause them to disappear, which means that countries whose major source of revenue is natural resources can use them to finance education, health care, development, and redistribution. Resource-rich countries tend to have strong currencies, which impede other exports; Because resource extraction often entails little job creation, unemployment rises; All over the world, countries have been doing this.

Introduction What is degrowth actually about? Degrowth is a perspective and an emerging social movement, which in the last few years brought together a multitude of projects and ongoing debates around alternative economies. The main idea of degrowth is an economy and society which aims for the well-being of all and for ecological sustainability. One key conviction is that social and ecological global justice can only be achieved when the destructive economic activities of the global North are reduced. Creating a space for mutual learning These key degrowth ideas resonate with many politically active people. With Degrowth in movement(s) we would like to provide space for mutual learning, especially as there is a danger that various movements could repeat the mistakes of others and blunder into the same pitfalls. Entering into a dialogue This project is explicitly not a matter of purely intellectual self-reflection, serving an abstract cognitive interest or a detached academic critique.

Economists sound warning over carbon tax South Africa's high dependency on fossil fuel-powered energy has earned it a place among the top 20 carbon emitting countries in the world. In this year's Budget Speech, Pravin Gordhan announced the implementation of a carbon tax for 2013-2014. A draft policy is being drawn up for public comment. Carbon pricing was the topic under panel discussion at the Mail & Guardian's Critical Thinking Forum on Tuesday, hosted by the M&G and BHP Billiton. Panellists drew a direct link between a carbon tax and rising electricity costs. As Michael Rossouw, executive director of Xstrata Alloys, argued: "We have not learnt to decouple energy growth from carbon usage". Rob Jeffrey, Econometrix managing director, cited a recent study that revealed a carbon tax would reduce GDP by 3% by 2021, a sum that would amount to R88-billion. Carbon tax "South Africa makes up 1.1% of the world's carbon dioxide emissions," said Jeffrey. The shape of the future carbon tax still hangs in the balance.

The Emerging Fourth Sector - FourthSector.net The Three Traditional Sectors Businesses create and distribute goods and services that enhance our quality of life, promote growth, and generate prosperity. They spur innovation, reward entrepreneurial effort, provide a return on investment and constantly improve their performance responding to market feedbacks. Non-profit organizations give us ways to celebrate, build and protect the many human values that give rise to healthy, thriving communities. Governmental organizations protect and expand the principles of democratic freedom for both individuals and communities, protecting the public interest while at the same time ensuring a level playing field of opportunity and a common framework of laws and their enforcement at a scale that matches the scale of human activity. The Blurring of Sectoral Boundaries Businesses are dedicating more resources to delivering social and environmental benefits. Figure 1. Figure 2. The Convergence of Organizations Toward a Fourth Sector Figure 3.

Basic Income Gathers Steam Across Europe Barcelona. In the last few months basic income—an unconditional cash payment to every member of the population—has been getting more and more attention in the media and social networks. Three items are especially interesting. First, Yanis Varoufakis, the able Greek economist, Minister for Finance in the first Syriza government and well known for his trenchant opposition to Troika austerity measures bashing the poor and already vulnerable majority of the population, has become such a media star that every time he gives an opinion on political economy, some theoretical aspect of economics or economic policy, his words are widely disseminated. In a filmed talk lasting half an hour Varoufakis, incisive and original as always, reframed the debate. Another essential point Varoufakis makes is that the separation between market and state is illusory. Art. 110a (new) Unconditional basic income Five weeks before the referendum 40% of the population stated they would vote “Yes”.

Logic Freaks Economics has increasingly become an intellectual game played for its own sake and not for its practical consequences for understanding the economic world. Economists have converted the subject into a sort of social mathematics in which analytical rigour is everything and practical relevance is nothing. At least three Nobel laureates have expressed their concerns. At a very early stage Wassily Leontief in 1982 objected that models had become more important than data: “Page after page of professional economic journals are ﬁlled with mathematical formulas … Year after year, economic theorists continue to produce scores of mathematical models and to explore in great detail their formal properties; and the econometricians ﬁt algebraic functions of all possible shapes to essentially the same sets of data.” In 1997, Ronald Coase complained: “Existing economics is a theoretical system which ﬂoats in the air and which bears little relation to what happens in the real world.” Geoffrey M.

Home - FourthSector.net The Economics of Happiness (2011) Economic globalization has led to a massive expansion in the scale and power of big business and banking. It has also worsened nearly every problem we face: fundamentalism and ethnic conflict; climate chaos and species extinction; financial instability and unemployment. There are personal costs too. The Economics of Happiness describes a world moving simultaneously in two opposing directions. We hear from a chorus of voices from six continents including Vandana Shiva, Bill McKibben, David Korten, Michael Shuman, Juliet Schor, Zac Goldsmith and Samdhong Rinpoche - the Prime Minister of Tibet's government in exile.

Facebook IPO Shows (Once Again) Tech Companies' Crazy Value Per Worker - Rebecca J. Rosen Today, after much anticipation, Facebook filed the paperwork for its initial public stock offering, expected to result in a market valuation somewhere between $75 billion and $100 billion. And while those numbers raise eyebrows for being big, another Facebook figure does for being so small: 3000. That's the number of employees the company has, according to press information on its website ("3000+" to be exact). This makes Facebook far and away the smallest employer of the five top names in tech (Google, Amazon, Apple*, and Microsoft are the other four). Google, the next smallest, has 10 times as many employees, with just over 32,000. But as much as Facebook stands out among the other big tech companies, as a group they all have very few employees relative to their market value when compared with other big American corporations. In the chart below, you can see the value of a company divided by the number of employees (for Facebook we are using the low-end estimate of $75 billion):

The Limits of the Earth — Part 1: Problems (Credit: NASA) This is part one of a two-part series on the limits of human economic growth on planet Earth. Part one details some of the environmental and natural resource challenges we’re up against. Part two, on the ultimate size of the resource pool and solutions to our problems, will be published tomorrow and linked here. Both parts are based on Ramez Naam’s new book, The Infinite Resource: The Power of Ideas on a Finite Planet The world is facing incredibly serious natural resource and environmental challenges: Climate change, fresh water depletion, ocean over-fishing, deforestation, air and water pollution, the struggle to feed a planet of billions. All of these challenges are exacerbated by ever rising demand — over the next 40 years estimates are that demand for fresh water will rise 50%, demand for food will rise 70%, and demand for energy will nearly double — all in the same period that we need to tackle climate change, depletion of rivers and aquifers, and deforestation.

Open Source Ecology Commons The commons is the cultural and natural resources accessible to all members of a society, including natural materials such as air, water, and a habitable earth. These resources are held in common, not owned privately. Commons can also be understood as natural resources that groups of people (communities, user groups) manage for individual and collective benefit. Characteristically, this involves a variety of informal norms and values (social practice) employed for a governance mechanism.[1] Commons can be also defined as a social practice of governing a resource not by state or market but by a community of users that self-governs the resource through institutions that it creates .[2] Definition and modern use[edit] The Digital Library of the Commons defines "commons" as "a general term for shared resources in which each stakeholder has an equal interest".[3] Types of commons[edit] Environmental resource[edit] The examples below illustrate types of environmental commons. Digital commons[edit]