‘A grand illusion’: seven days that shattered Facebook’s facade. The Most Downvoted Comment in Reddit History Is the Perfect Example of How Not to Respond to Customer Complaints. One of the features of the soon to be released Star Wars-based video game Battlefront II is an in-game economy that allows players to earn credits to unlock items within the game. 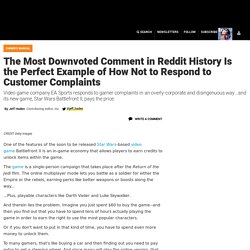 The game is a single-person campaign that takes place after the Return of the Jedi film. The online multiplayer mode lets you battle as a soldier for either the Empire or the rebels, earning perks like better weapons or boosts along the way... ...Plus, playable characters like Darth Vader and Luke Skywalker. And therein lies the problem. Imagine you just spent $60 to buy the game--and then you find out that you have to spend tens of hours actually playing the game in order to earn the right to use the most popular characters. Or if you don't want to put in that kind of time, you have to spend even more money to unlock them. NRA goes dark after Vegas massacre. Democrats lashed out at the National Rifle Association after the worst mass shooting in American history on Monday, but rather than fight back, the gun rights group retreated to a familiar posture: silence. 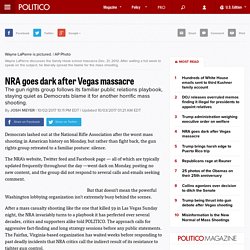 The NRA’s website, Twitter feed and Facebook page — all of which are typically updated frequently throughout the day —went dark on Monday, posting no new content, and the group did not respond to several calls and emails seeking comment. Story Continued Below But that doesn’t mean the powerful Washington lobbying organization isn't extremely busy behind the scenes. After a mass casualty shooting like the one that killed 59 in Las Vegas Sunday night, the NRA invariably turns to a playbook it has perfected over several decades, critics and supporters alike told POLITICO. The approach calls for aggressive fact-finding and long strategy sessions before any public statements. Game Theory Models for Organizational/Public Conflict. Priscilla Murphy (Drexel University) Abstract: This paper applies game theory to conflicts between organizations and publics. 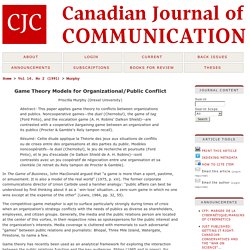 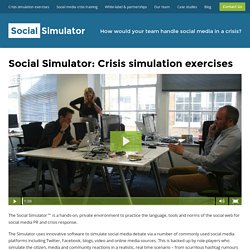 The Simulator uses innovative software to simulate social media debate via a number of commonly used social media platforms including Twitter, Facebook, blogs, video and online media sources. This is backed up by role-players who simulate the citizen, media and community reactions in a realistic, real time scenario – from scurrilous hashtag rumours to nasty phone calls. The Simulator works with groups from 2-50, and can take place on-site or remotely across multiple locations. What The New York Times Didn’t Tell You. What The New York Times Didn’t Tell You “Nearly every person I worked with, I saw cry at their desk.” 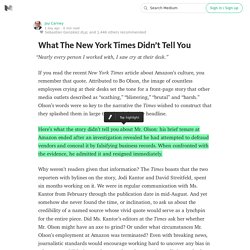 Nobel laureate Tim Hunt resigns after 'trouble with girls' comments. A Nobel laureate who said that scientists should work in gender-segregated labs and that the trouble with “girls” is that they cause men to fall in love with them has resigned from his position at University College London (UCL). 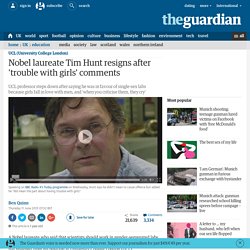 Tim Hunt, an English biochemist who admitted that he had a reputation for being a “chauvinist”, had made the comments at the World Conference of Science Journalists in Seoul, South Korea, where he said: “Let me tell you about my trouble with girls … three things happen when they are in the lab … You fall in love with them, they fall in love with you and when you criticise them, they cry.”

In a statement published on its website UCL said that it could confirm that Hunt had resigned on Wednesday from his position as honorary professor with the UCL Faculty of Life Sciences, “following comments he made about women in science at the World Conference of Science Journalists on 9 June”. Explicit cookie consent. SORRY can be hard word for corporations to say. 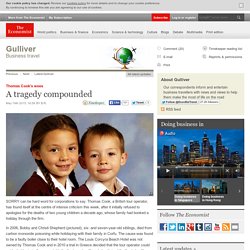 Thomas Cook, a British tour operator, has found itself at the centre of intense criticism this week, after it initially refused to apologise for the deaths of two young children a decade ago, whose family had booked a holiday through the firm. Facts about Starbucks in the Middle East. It is disheartening that calls for boycotts of Starbucks stores and products, which are based on blatant untruths, have had direct impacts on local economies and residents, and have also led to violent situations involving our stores, partners (employees) and customers. 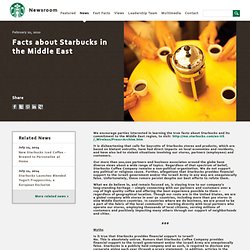 Our more than 200,000 partners and business associates around the globe have diverse views about a wide range of topics. Regardless of that spectrum of belief, Starbucks Coffee Company remains a non-political organization. We do not support any political or religious cause. Nieuw tabblad.

Uber surge pricing: sound economic theory, bad business practice. When the snow started falling in New York City this past weekend, the prices for a ride in an Uber car began rising. 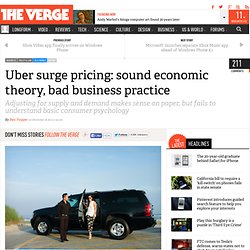 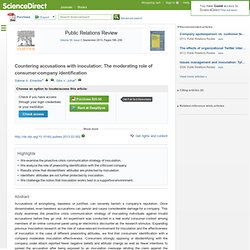