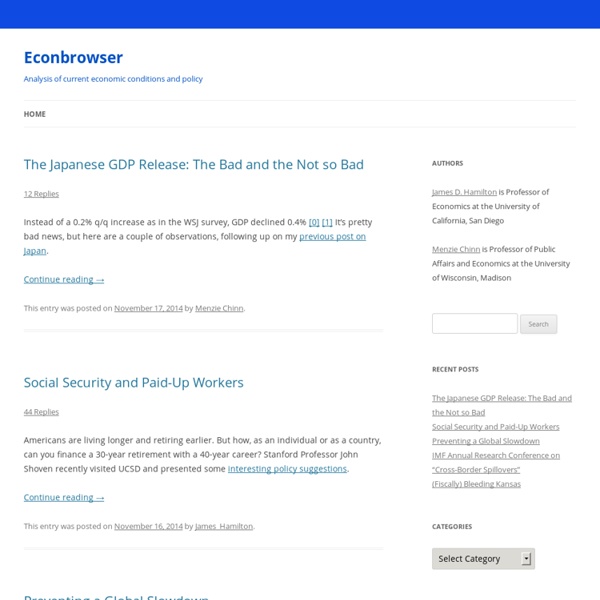 Estimated insurance coverage costs revised downward. Continue reading As Russia fosters heightened instability in the eastern portions of Ukraine [0], we should be considering what methods will impose maximum pain on Russian policymakers. Already, the Russian economy has taken a hit, even while in an already fragile state.[1] [2] Continue reading The increase in vertical specialization in Asia has implications for the strength of linkages between the region’s economies, and the tendency to manage intra-regional exchange rates.

Real Time Economics China’s GDP growth fell in the first quarter to its slowest pace since September of 2012, slipping to 7.4% on-year growth from 7.7% the in the fourth quarter. The increase was slightly higher than economists’ expectations of a 7.3% gain. Authorities released other data that suggested continuing weakness, but not at a quickening pace.

Economic Dreams - Economic Nightmares I spent most of my working life in the US Forest Service, battling fundamentalism. Most of the battles dealt with economics. My first job was to coordinate use of a linear programming model (FORPLAN) in the development of forest plans. The model may (or may not) have been useful in projecting overall timber sales volumes from big-timber forests, but to have used it as an overall planning model was a mistake. Forests are not factories. Beat the Press Glenn Kessler, the Washington Post fact checker, gave President Obama two Pinocchios for saying that women earn on average just 77 cents for every dollar that men earn. Kessler makes some valid points as to why this number overstates the gap. First it is an annual number that doesn't take account of the fact that women are more likely to work part-time and part-year. It is also true that women typically have less work experience because they take time out of the paid labor force. These and other factors (some of which go in the other direction) would be important items to take into account in a full examination of gender inequality. But has President Obama really committed a two-Pinocchio offense by using a number straight out of Census data without these additional qualifications?

Unemployment Has Doubled: Ratio Increases by State, Surprisingly Consistent. « Rortybomb Ryan Avent, reporting live from the AEA meeting, mentions a panel where Robert Shimer gives an excellent overview of the labor market (my bold): Rob Shimer, who’s well known for his work on labour markets, offered additional thoughts on the employment situation, beginning by laying out a few key labour market facts. Take any given group within the labour force, and the crisis has essentially generated a doubling of the unemployment rate. Turnover among the unemployed has also been quite low since the initial decline. Energy futures as predictors Many publications use energy futures as proxy measures for market expectations of future energy prices. Does this procedure make sense? Consider the IMF’s recent World Economic Outlook, which included a figure with futures a year ago, and in March. While futures a year ago indicated some decline, the most recent reading indicate persistently high prices. Figure 1.20 from IMF WEO, April 2006.

Tim Harford's Undercover Economist blog on the economics of everyday life Tuesday archive : If the price is right From 8th July, 2006. If you want to be rich, you can try to set up a brilliantly successful company. Adam Smith Lives! The Janet Prindle Institute for Ethics at DePauw University is sponsoring an Undergraduate Ethics Symposium April 8-10, 2010. This conference is shaped around a series of workshops in which students present to one another their best work on a subject of ethical concern. I write to invite you to encourage your faculty to bring this event to the attention of their students. A Call for Essays and Creative Writing Projects is attached, and a tentative schedule for the symposium, which will be frequently updated, is available on our website: Let me say at the outset that we hope to receive thoughtful and insightful essays and creative writing works which explore, analyze and examine ethical issues in a variety of ways. While writings on all areas of ethical concern are welcome, we encourage submissions focusing on Self-Interest, Altruism and Morality: Evolutionary, Religious and Philosophical Perspectives. Sincerely,

Yglesias » Economics and Incentives By Matthew Yglesias on January 11, 2011 at 4:31 pm "Economics and Incentives" I find it very unlikely that whether or not economists adopt a professional code of ethics is a big deal in the scheme of things, but Lant Pritchett’s furious objections to the idea are entertaining: Economic Impact Studies Travel & Tourism: TRAVEL AND TOURISM STUDY FINAL REPORT SUMMARY The Rural Center commissioned two professors at the Department of Economics and Finance at Western Carolina University to study the employment impacts of travel and tourism... ESTIMATED ECONOMIC IMPACT OF RECREATIONAL FISHING By Jeff Gunderson & Glenn Kreag.