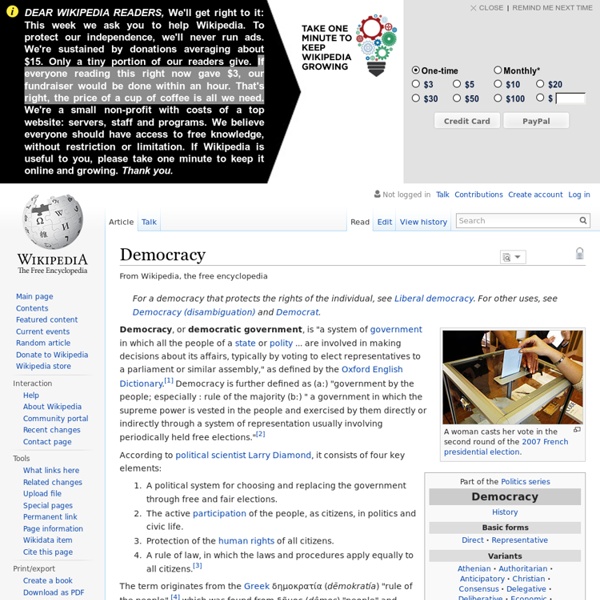 According to political scientist Larry Diamond, it consists of four key elements: The term originates from the Greek δημοκρατία (dēmokratía) "rule of the people",[4] which was found from δῆμος (dêmos) "people" and κράτος (krátos) "power" or "rule", in the 5th century BC to denote the political systems then existing in Greek city-states, notably Athens; the term is an antonym to ἀριστοκρατία (aristokratía) "rule of an elite". While theoretically these definitions are in opposition, in practice the distinction has been blurred historically.[5] The political system of Classical Athens, for example, granted democratic citizenship to an elite class of free men and excluded slaves and women from political participation. Democracy contrasts with forms of government where power is either held by an individual, as in an absolute monarchy, or where power is held by a small number of individuals, as in an oligarchy. Characteristics[edit] History[edit] Ancient origins[edit] Middle Ages[edit] Robert A.

Aporia In philosophy, an aporia (Ancient Greek: ᾰ̓πορῐ́ᾱ, romanized: aporíā, lit. 'impasse, difficulty in passage, lack of resources, puzzlement') is a puzzle or state of puzzlement. In rhetoric, it is a declaration of doubt, made for rhetorical purpose and often feigned. Definitions[edit] Liberal democracy A liberal democracy may take various constitutional forms: it may be a constitutional republic, such as France, Germany, India, Ireland, Italy, or the United States, or a constitutional monarchy, such as Japan, Spain, the Netherlands, Canada, or the United Kingdom. It may have a presidential system (Argentina, Brazil, Mexico, the United States), a semi-presidential system (France and Russia), or a parliamentary system (Australia, Canada, India, New Zealand, Poland, the Netherlands and the United Kingdom). Structure[edit]

Thrasymachus Life, date, and career[edit] Aristophanes makes what is the most precisely dateable of references to Thrasymachus, in a passing joke from a lost play dated to 427 BCE.[1] Nils Rauhut of the Internet Encyclopedia of Philosophy concludes from this passage that Thrasymachus must have been teaching in Athens for several years before this point.[2] A fragment from Clement of Alexandria provides some further context by contrasting Thrasymachus with the Macedonian Archelaus. "And while Euripides says in the Telephus, 'Shall we who are Greeks be slaves to barbarians?', Thrasymachus says in his speech For the People of Larisa, 'Shall we become slaves to Archelaus, Greeks as we are, to a barbarian?'"

Cephalus Cephalus (; Ancient Greek: Κέφαλος Kephalos means "head"[citation needed]) is a name, used both for the hero-figure in Greek mythology and carried as a theophoric name by historical persons. Mythological Historical See also[edit] Polemarchus Polemarchus or Polemarch (; Greek: Πολέμαρχος; 5th century – 404 BCE) was an ancient Athenian philosopher from the Piraeus. Life[edit] The son of Cephalus of Syracuse, Polemarchus had two brothers, the famous orator Lysias[1] and Euthydemus, and a sister who married Brachyllus. Polemarchus and Lysias traveled to Thurii when the latter was 15 years old.[2] See also[edit] List of speakers in Plato's dialogues

SN user’s Bill of Rights Back in May, privacy online was the number one issue on everyone’s minds. Facebook was in the middle of a huge fiasco over their privacy settings, Google was in hot water over the non-secure launch of Buzz, and AT&T and other companies had been called out for not doing enough to protect consumers’ data. Facebook’s privacy issues were the most notorious and severe, prompting the Electronic Frontier Foundation to propose a Bill of Rights of sorts for its users. They called for three basic principles that all social network users should demand: the right to informed decision making, the right to use and disclose their own data, and the right to completely delete their information should they decide to deactivate their account. This past week a conference on Computers, Freedom and Privacy in a Networked Society convened in San Francisco, CA to “set the agenda for our rights on the networks,” and “to secure ourselves against the threats of information technology.”

Glaucon Biography[edit] Glaucon was the older brother of Plato and, like his brother, was in the inner circle of the young affluent students of Socrates. Although little is known about his life, some information can be extrapolated from Plato's writings and from later Platonic biographers. He was born in Collytus,[1] just outside Athens, most likely before 445 BC (as he was old enough to serve in the Athenian army during the Battle of Megara, in 424 BC). According to the Oxford Greek Dictionary the name "Glaucon" is derived from the adjective glaukommatos (γλαυκόμματος) meaning "bright-eyed", "owl-eyed", or "grey-eyed".[3] It is generally considered to be a devotion to Athena, the goddess of wisdom and namesake and guardian deity of the city of Athens. It is unclear whether it was a name given at birth, an epithet for adoration of the goddess, or a nickname given for "looking for wisdom."

3 privacy initiatives from the Office of Manage Last Friday was a scramble for government security personnel and independent privacy advocates, and should also have stood out to anyone concerned with the growth of online commerce, civic action, and social networking. The U.S. government’s Office of Management and Budget, which is the locus of President Obama’s drive toward transparency and open government, popped out three major initiatives that combine to potentially change the landscape for online identity and privacy, not only within government but across the Internet. In this blog I’ll summarize the impacts of all three documents, as well as the next steps that I see necessary in these areas. The documents (all distributed as PDFs, which is not the easiest format to draw commentary) are: These documents are not long, but the complexity of the policy areas they address ensure that no blog could cover everything of importance, nor could a single commentator like me provide a well-rounded view.

Piraeus Place in Greece Piraeus has a long recorded history, dating to ancient Greece. The city was founded in the early 5th century BC, when this area was selected to become the new port of classical Athens and was built as a prototype harbour, concentrating all the import and transit trade of Athens.

Authority The word authority is derived from the Latin word auctoritas, meaning 'invention', 'advice', 'opinion', 'influence', or 'command'. In English, the word authority can be used to mean power given by the state (in the form of government, judges, police officers, etc.) or by academic knowledge of an area (someone can be an authority on a subject). When the word Authority is used in the name of an organization, this name usually refers to the governing body upon which such authority is vested; for example, the Puerto Rico Electric Power Authority or the Massachusetts Bay Transportation Authority.

Peloponnesian War The Peloponnesian War (431–404 BC) was an ancient Greek war fought by Athens and its empire against the Peloponnesian League led by Sparta. Historians have traditionally divided the war into three phases. In the first phase, the Archidamian War, Sparta launched repeated invasions of Attica, while Athens took advantage of its naval supremacy to raid the coast of the Peloponnese attempting to suppress signs of unrest in its empire. This period of the war was concluded in 421 BC, with the signing of the Peace of Nicias.