The Coming Collapse of the Middle Class 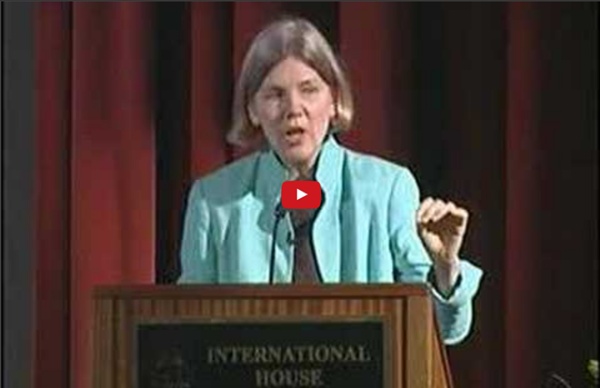 Elizabeth Warren: America Without a Middle Class Can you imagine an America without a strong middle class? If you can, would it still be America as we know it? Today, one in five Americans is unemployed, underemployed or just plain out of work. One in nine families can't make the minimum payment on their credit cards. Families have survived the ups and downs of economic booms and busts for a long time, but the fall-behind during the busts has gotten worse while the surge-ahead during the booms has stalled out. The crisis facing the middle class started more than a generation ago. But core expenses kept going up. To cope, millions of families put a second parent into the workforce. Through it all, families never asked for a handout from anyone, especially Washington. The contrast with the big banks could not be sharper. And when various forms of this creative banking triggered economic crisis, the banks went to Washington for a handout. Families are ready for change. America today has plenty of rich and super-rich.

Rev. Martin Luther King, Jr. - April 4, 1967 - Beyond Vietnam: A Time To Break Silence You can't have a "more perfect union" without "more perfect people"! How are we doing...? This is the least known of Dr. King's speeches amongst the masses, but it needs to be heard because it is STILL relevant today. Many folk have heard that the Reverend Doctor Martin Luther King, Jr. made the comment that the U.S. government [was/is] "the greatest purveyor of violence in the world today". This was in context to a speech delivered on April 4, 1967 at Riverside Church in New York City - exactly one year before his untimely death. Mr. I need not pause to say how very delighted I am to be here tonight, and how very delighted I am to see you expressing your concern about the issues that will be discussed tonight by turning out in such large numbers. I come to this magnificent house of worship tonight because my conscience leaves me no other choice. The truth of these words is beyond doubt, but the mission to which they call us is a most difficult one. So, too, with Hanoi.

LG's 55" OLED HDTV Schwarzenegger again orders cut in state workers' pay | L.A. NOW Gov. Arnold Schwarzenegger on Thursday officially ordered most state workers’ paychecks slashed to the federal minimum wage -- $7.25 per hour -- now that California has entered a new budget year without a spending plan. State Controller John Chiang, who issues the paychecks, has said he would not obey the order. Debbie Endsley, state Department of Personnel Administration director, said in a letter to Chiang on Thursday that he “has no legal authority to pay state employee wages” above the federal minimum wage when there’s no budget in place. The Schwarzenegger administration last ordered Chiang, a Democrat, to cut workers’ wages in 2008. The instructions from Endsley on Thursday exempted more than 37,000 state workers who recently reached tentative contract agreements with the administration after being offered immunity from such wage cuts. -- Shane Goldmacher in Sacramento Photo credit: Los Angeles Times

Too Big to Jail? BILL MOYERS: This week on Moyers & Company, the crusading Bill Black. WILLIAM K. BLACK: No one can claim with a straight face that if we prosecuted bankers, as opposed to banks, that it would have any negative effect. It would have huge positive effects in sending the right message of accountability and the right message of deterrence. ANNOUNCER: Funding is provided by: Anne Gumowitz, encouraging the renewal of democracy. Carnegie Corporation of New York, supporting innovations in education, democratic engagement, and the advancement of international peace and security at Carnegie.org. The Ford Foundation, working with visionaries on the front lines of social change worldwide. The Herb Alpert Foundation, supporting organizations whose mission is to promote compassion and creativity in our society. The John D. and Catherine T. Park Foundation, dedicated to heightening public awareness of critical issues. The Kohlberg Foundation. Barbara G. BILL MOYERS: Welcome. WILLIAM K. WILLIAM K. WILLIAM K.

Democratic campaign committees losing big Wall Street donors A revolt among big donors on Wall Street is hurting fundraising for the Democrats' two congressional campaign committees, with contributions from the world's financial capital down 65 percent from two years ago. The drop in support comes from many of the same bankers, hedge fund executives and financial services chief executives who are most upset about the financial regulatory reform bill that House Democrats passed last week with almost no Republican support. The Senate expects to take up the measure this month. This fundraising free fall from the New York area has left Democrats with diminished resources to defend their House and Senate majorities in November's midterm elections. Although the Democratic Senatorial Campaign Committee and the Democratic Congressional Campaign Committee have seen just a 16 percent drop in overall donations compared with this stage of the 2008 campaign, party leaders are concerned about the loss of big-dollar donors. Major dent GOP opportunity

Chris Hedges Takes On the ‘Global Culture of Violence’ On Sept. 28, Chris Hedges spoke at the Brooklyn Society for Ethical Culture’s Charley Horwitz Platform on the pervasive violence that characterizes our era and offered possible solutions. Watch Hedges deliver the full speech—titled “The Global Culture of Violence: What Is the Path to Peace and Justice?”—in the YouTube clip below. U.S. should cut deficit to spur recovery, IMF says Cut Social Security. Ditch the deduction for interest on home mortgages. Tax gasoline. The United States recently opened itself to the most intense scrutiny yet by the International Monetary Fund, and on Thursday was offered a bitter pill when the agency criticized some well-defended aspects of American culture -- cheap fuel, subsidized housing, and a government retirement check. In a broad call for U.S. financial prudence, the agency also said the Obama administration was overestimating U.S. economic growth and needed to trim government deficits by hundreds of billions of additional dollars if its announced budget targets are to be met. The recovery is going reasonably well in the United States, the IMF said, but some of the tougher decisions remain to keep it on track. The analysis of China's financial sector is ongoing, and a date for the results has not been announced. An administration official said the IMF's conclusions were too harsh.

FICO Credit Scores Collapse - 25% of Americans Sink Below 600 vs. 15% Historically The Los Angeles Times reports Credit scores sink to new lows. Battered by unemployment and tighter lending standards, the credit scores of millions of Americans are sinking to new lows.About 25.5% of consumers — or 43.4 million people — had credit scores below 600 in April, according to FICO Inc. Historically, only about 15% of consumers — or 25.5 million — have had scores below that level, FICO said.Those in the middle of the spectrum have also declined. Inquiring minds might be interested in charts of consumer credit and revolving credit. Total Consumer Credit Total Consumer Credit - Percent Change From Year Ago Total Revolving Credit Total Revolving Credit - Percent Change From Year Ago Those chart are unprecedented. Reasons Banks are curtailing new creditCustomer attitudes towards borrowing have changedBank writeoffs of consumer credit have increasedTroubled consumers are paying off their credit cards and defaulting on their house.