Reflection of democracy and human rights 10 year review 200. Dare Not Linger: The Presidential Years by Nelson Mandela and Mandla Langa review – an impossible act to follow. Six months after the 1994 election that brought the ANC to power, I was interviewing Ahmed Kathrada, then President Mandela’s parliamentary counsellor, when I heard the door behind me open. 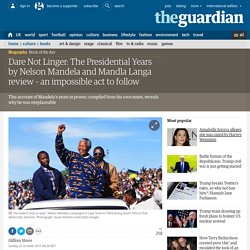 A look must have been exchanged because Kathrada stopped mid-flow to ask if I wouldn’t mind stepping out for a moment. As I was leaving, I heard the new arrival say: “He’s done it again.” I knew that “he” must be Nelson Mandela and I had a good idea what he must have done. That evening’s news soon confirmed it: Mandela had gone off-piste again. Never the most riveting of speakers, he would, every now and then, galvanise his country’s attention by breaking away from the monotonously good stuff his speech writers had compiled to speak from the heart. UNPAN017987. University of Cape Town Sees Affirmative Action Rift. Instead, unease with the current approach has spilled out over the past year in fierce exchanges on newspaper editorial pages and formal debating platforms. 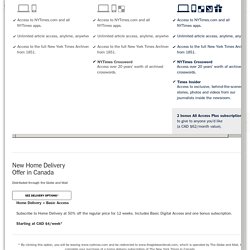 Sixteen years after the political ascent of the black majority, the university’s dilemma resonates across a society conflicted about how best to achieve racial redress, whether in corporate board rooms or classrooms. Prof. Neville Alexander, a Marxist sociologist who was classified as mixed race under apartheid, has roused the campus debate with the charge that affirmative action betrays the ideals of nonracialism that so many fought and died for during the long struggle against apartheid. Hollywood gets it wrong over Nelson Mandela and Francois Pienaar. Directed by Clint Eastwood, with Morgan Freeman as Nelson Mandela and Matt Damon as Francois Pienaar, the movie purports to tell the story of how Mandela used the Springboks and the tournament as a mechanism to unite a divided nation. 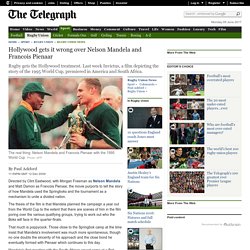 The thesis of the film is that Mandela planned the campaign a year out from the World Cup to the extent that there are scenes of him in the film poring over the various qualifying groups, trying to work out who the Boks will face in the quarter-finals. That much is poppycock. Those close to the Springbok camp at the time insist that Mandela's involvement was much more spontaneous, though no one doubts the sincerity of his approach and the close bond he eventually formed with Pienaar which continues to this day. Mandela's first meeting with the South African squad came at a Bok training session in Cape Town before the opening game, which was when Hennie le Roux presented him with the Springbok cap Mandela would wear at the final.

Mandela and the rugby hero who rejected the prejudices of a white childhood. Among certain white communities in apartheid South Africa, it was taken for granted that Nelson Mandela was a terrorist who must remain behind bars. 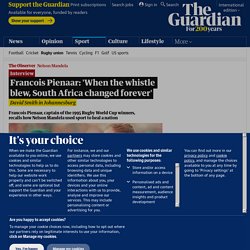 That was drummed into the young François Pienaar, who would one day welcome Mandela to his wedding and name him as godfather to his two sons. The men came together when Pienaar captained South Africa to victory at the 1995 Rugby World Cup. When the blond Afrikaner shook hands with the black freedom fighter turned president, they instantly forged one of the country's defining images of racial unity.

"François here is the symbol of reconciliation," said Ahmed Kathrada, a fellow prisoner of Mandela on Robben Island, when he shared a platform with Pienaar at the One Young World summit in Johannesburg last October. "Invictus" - Official Trailer. What happened to South Africa's vision of racial equality? Fourteen years after Nelson Mandela proclaimed the birth of the rainbow nation after 350 years of white oppression, a comedy has popped up on South African television called Coconuts. 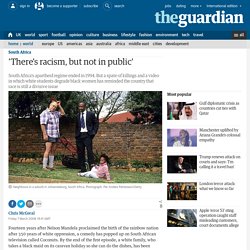 By the end of the first episode, a white family, who takes a black maid on its caravan holiday so she can do the dishes, has been punished for its prejudice and turned black. The black maid wakes up to find herself much paler. From then on it is debatable whose misery is greater - the shocked former white people who blame the new order for their situation ("I'm telling you, it's this damn government. This affirmative action thing, it's gone too far"), or the maid who laments the misfortune of being black under apartheid and white under African National Congress rule. Is black economic empowerment working? When South Africa held its first democratic elections in 1994 the balance of political power finally turned. 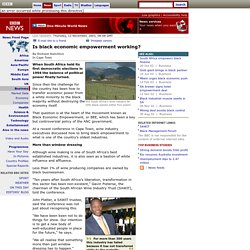 Since then the challenge for the country has been how to transfer economic power from a white minority to the black majority without destroying the economy itself. That question is at the heart of the movement known as Black Economic Empowerment, or BEE, which has been a key but controversial policy of the ANC government. At a recent conference in Cape Town, wine industry executives discussed how to bring black empowerment to what is one of the country's oldest industries. More than window dressing Although wine making is one of South Africa's best established industries, it is also seen as a bastion of white influence and affluence. 'Black economic empowerment has failed': Piketty on South African inequality. Thomas Piketty is puzzled. 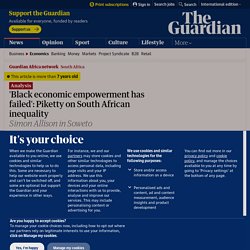 To a near-capacity crowd in Soweto, he confesses that South Africa presents him and his fellow economists with a conundrum. “Of course now we are 25 years after the fall of apartheid … [but] inequality is not only still very high in South Africa, but has been rising and in some ways income inequality is even higher today than 20 years ago. This is something we want to better understand,” he told the audience at the University of Johannesburg campus.

10 Years In, South African Affirmative Action Faces Criticism. JOHANNESBURG — South Africa is observing the 10th anniversary of the law that brought affirmative action to the workplace for black South Africans. 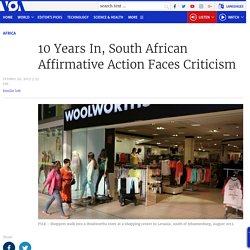 The Black Economic Empowerment law - commonly known as BEE - was meant to redress decades of inequality by implementing quotas for black workers in South African companies. Ten years later, however, the policy has its share of critics. "Hi, how are you? Let's quickly run through the plan. World: Affirmative Action in South Africa - nytimes.com. Untitled. Employment&UnemploymentTrendsInPostApartheidSA. South Africa unemployment is worse now than at the end of apartheid. Unemployment in South Africa is now higher than it was at the end of apartheid, with almost one-third of the labor force out of work or discouraged. 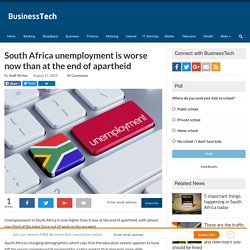 This is according to a new report by the World Bank South Africa economic update: jobs and South Africa’s changing demographics, which says that the education system appears to have left the young unemployed ill equipped for a labor market that demands more skills. At a time when almost half the population is under 25, unemployment among the young (15–24) is almost 50%, double the national rate. FACTSHEET: Unemployment statistics in S. Africa explained. South Africa has one of the highest unemployment rates in the world. 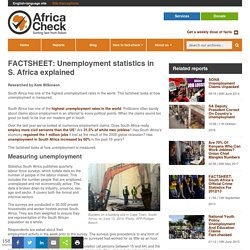 Politicians often bandy about claims about employment in an attempt to score political points. When the claims sound too good (or bad) to be true our readers get in touch. Over the last year we’ve looked at numerous employment claims. Does South Africa really employ more civil servants than the US? Are 31.5% of white men jobless? Policies for social equality. GEAR. South Africa: Economic Policy and Development. : Economic Policy and Development on richardknight.com This document was produced for Shared Interest, a not for profit social investment fund guaranteeing South African bank loans to community development financial institutions engaged in 's reconstruction process.

Shared Interest and its Swiss associate RAFAD have established the Thambani International Guarantee Fund in South Africa, which strengthens grassroots organizations and enables them to provide affordable credit for small business and social housing in South Africa's low income communities. Reconstruction and Development Programme - Wikipedia. Reconstruction and Development Programme (RDP) is a South African socio-economic policy framework implemented by the African National Congress (ANC) government of Nelson Mandela in 1994 after months of discussions, consultations and negotiations between the ANC, its Alliance partners the Congress of South African Trade Unions and the South African Communist Party, and "mass organisations in the wider civil society".[1] The ANC's chief aim in developing and implementing the Reconstruction and Development Programme, was to address the immense socioeconomic problems brought about by the consequences of the struggle against its predecessors under the Apartheid regime.

Background: The need for an RDP[edit] Economic policy. Africa's Political Response to HIV/AIDS. (July 2002) The HIV/AIDS epidemic in Africa is often described as a crisis that demands the same kind of mobilization and response that would be necessary were a country at war. Analogies are often drawn with the liberation struggles that freed much of Africa from colonial rule. Yet, the political response to the HIV/AIDS epidemic has been, and remains, inadequate, although a dramatic trend toward a more favorable political environment has emerged in just the past few years. South Africa: The ANC government and the AIDS crisis. By Barry Mason 5 July 2000 South Africa currently has four million HIV/AIDS cases and the figure is projected to rise to 7.5 million by the year 2010. Yet the ANC government of President Thabo Mbeki has no effective programme to tackle the developing catastrophe.

The government's National Council of AIDS does not even have representation from members of local AIDS community groups, health professionals, activists or voluntary bodies. In 1997 South Africa attempted to obtain cheaper versions of the AZT drug treatment which is available in most western countries. It was blocked by the world pharmaceutical industry, which took up a law suite against alleged breach of intellectual property rights. South Africa's AIDS Epidemic (1999) Miracle Rising®: South Africa - Voting. Thabo Mvuyelwa Mbeki. Thabo Mvuyelwa Mbeki was born on June 18 1942, in Mbewuleni (meaning ‘place of seed’), a tiny village in Idutywa in Transkei. His middle name ’Mvuyelwa’ is Xhosa and means ‘he for whom the people sing’. Both his parents were teachers, activists and members of the Communist Party of South Africa (CPSA later renamed the SACP). His father, Govan Mbeki, was a leading figure in the activities of the African National Congress (ANC) in the Eastern Cape.