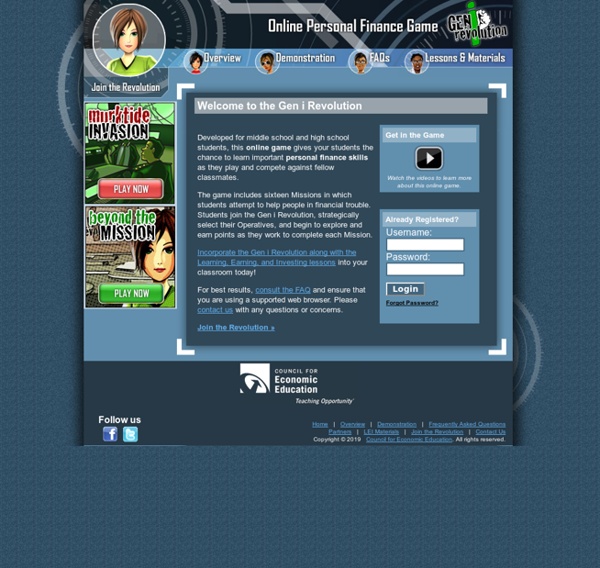 Developing Good Credit Habits Key Concepts Credit, Goods, Income, Interest Rate, Interest, Services, Credit Card Goods and Services: Some are Private, Some are Not The role of government is to provide for the common defense, define and protect property rights, and enforce contractual arrangements. Throughout the 20th and early 21st century, government has increased its role in economic life. The role of government has expanded to address so-called market fa... Grades 3-5, 6-8 Calculating Simple Interest How do banks calculate the amount of interest paid on a loan? Grades 6-8, 9-12 Trouble is Brewing in Boston - "Colonial Voices: Hear Them Speak" It’s December 16, 1773 and many of the citizens of Boston are furious with King George’s new tax on tea. Grades K-2, 3-5 To Buy or Not To Buy While precise numbers are not known, it is believed the number of boycotts has grown markedly in the past fifty years. Mystery Workers

Budget Odyssey EconEdLink Key Concepts Budget, Income, Expenses, Fixed Expenses, Variable Expenses Booker T. Washington:"Fifty Cents and a Dream" Young Booker T. Grades K-2, 3-5 Do I Look Like I'm Made of Money? One of the most common replies given by parents when their children ask for money is “Do I look like I’m made of Money?” Grades 3-5, 6-8 Money Comes and Goes Students read two online stories that introduce them to the elements of a budget and show that a successful budget balances money coming in (income) with money going out (expenses and savings). Grades 3-5 Constitution Costs This lesson helps students understand the basic services provided for Americans in the United States Constitution and the necessity of a system of taxation to fund those services. Grades 6-8, 9-12 Buying vs. Have you given any thought to where you will live when you are "on your own" - out in the world earning a living? Grades 9-12

End of Term Quiz - Classroom Games An interactive business and economics quiz. This interactive, end of term quiz is a test of students' knowledge of business and economics terminology. Exactly how you use the games is up to you - there could be a number of variations which are suggested below. Essentially, there are two quizzes - one designed to be used with two teams/individuals playing against each other, and the second for one team/individual playing against the clock. Game One This game is made up of 20 octagons with letters on which students must select and answer questions on. You could have two evenly matched teams trying to move from left to right, or a larger team moving from left to right and a smaller team from top to bottom. Each team/individual should select their colour - they can either be blue or yellow. You can also control the exercise using the keyboard tab between octagons. Play Game One... A list of questions to use is available below, or you could make up your own using the glossary for inspiration.

Gapminder: Unveiling the beauty of statistics for a fact based world view.