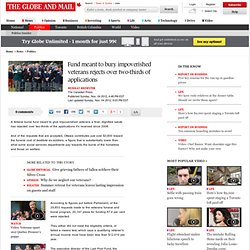 And of the requests that are accepted, Ottawa contributes just over $3,600 toward the funeral cost of destitute ex-soldiers, a figure that is substantially lower than what some social services departments pay towards the burial of the homeless and those on welfare. According to figures put before Parliament, of the 29,853 requests made to the veterans funeral and burial program, 20,147 pleas for funding 67.4 per cent were rejected. They either did not meet the eligibility criteria, or failed a means test, which says a qualifying veteran’s annual income must have been less than $12,010 per year.

Jean-Pierre Goyer says they have been petitioning Stephen Harper’s Conservative government to not only overhaul the rules, but to increase the stipend given to those who do qualify for assistance. “This has been repeatedly raised.” Mr. Canadians increasingly cynical about state of democracy: Hepburn. EDMONTON—In findings that should disturb every politician across the country, a series of new national surveys suggest record numbers of Canadians are fed up with the state of our democracy. 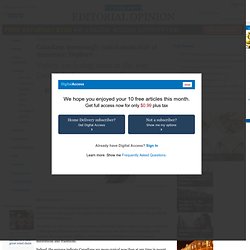 Worse for elected leaders, more and more Canadians believe that politicians, regardless of their party affiliation, don’t listen to them, don’t care about the issues that really concern them and aren’t willing to act to preserve and improve our democratic institutions and traditions. Indeed, the surveys indicate Canadians are more cynical now than at any time in recent history about politicians and how our democracy is working. Censorship is alive and well in Canada – just ask government scientists. Freedom to Read Week begins on Feb. 24, bringing with it the perfect opportunity to kick the tires of democracy and make sure the old jalopy’s still running as she should. 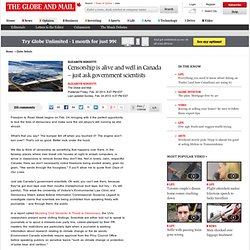 What’s that you say? RBC outsourcing made easier by policy:experts. A shareholder leaves the Royal Bank of Canada annual meeting in Calgary, Feb. 28, 2013.THE CANADIAN PRESS/Jeff McIntosh TORONTO - Observers say the controversy over the Royal Bank of Canada's decision to outsource dozens of Toronto jobs is part of an alarming trend bolstered by government policy. 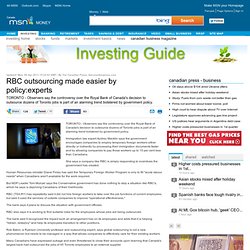 Immigration law expert Audrey Macklin says the government encourages companies to employ temporary foreign workers either directly or indirectly by processing their immigration documents faster and by allowing companies to pay those workers up to 15 per cent less than Canadians. PBO says Parliament has ‘long way to go’ before it wins power of public purse, could still pursue legal action. ITK's 'A Taste of the Arctic' shindig on April 7, Ottawa, photographs by Cynthia Münster April 14, 2014 The Hill Times photograph by Cynthia Münster A happy crowd at ITK's 'Taste of Arctic' at the NAC gathers for a picture. 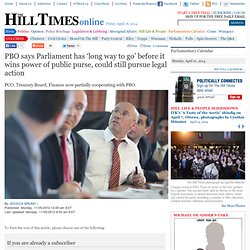 The annual event, held in Ottawa by the Inuit Tapiriit Kanatami, is meant showcase Inuit culture. Some 350 attend the party, including a number of MPs, Senators, Cabinet minister, lobbyists and journalists. National Inuit Leader and ITK President Terry Audla shows off his seal vest to Employment Minister Jason Kenney. Environics' Meredith Taylor and Greg MacEachern with ITK's Stephen Hendrie. Justice Minister Peter MacKay, his son Kian, and ITK president Terry Audla. ITK president Terry Audla and Abbas Rana, assistant deputy editor at The Hill Times and Party Central columnist. Robocalls suit uses Supreme Court ruling to argue results should be tossed. The legal reasoning the Supreme Court of Canada used in sustaining the disputed election of one Conservative MP should lead the results in six other Tory-held ridings to be overturned, the lawyer for the Council of Canadians argues in his factum, which was filed at federal court on Friday. 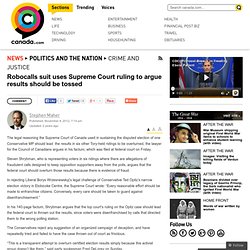 Steven Shrybman, who is representing voters in six ridings where there are allegations of fraudulent calls designed to keep opposition supporters away from the polls, argues that the federal court should overturn those results because there is evidence of fraud. In rejecting Liberal Borys Wrzesnewskyj’s legal challenge of Conservative Ted Opitz’s narrow election victory in Etobicoke Centre, the Supreme Court wrote: “Every reasonable effort should be made to enfranchise citizens.

Conversely, every care should be taken to guard against disenfranchisement.” Fascism-Michael Ignatieff's timely warning on the politics of fascism. A wise voice is warning that fascism lies at the bottom of the English-speaking world’s dangerous political decline. 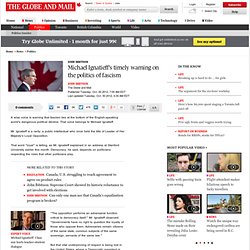 That voice belongs to Michael Ignatieff. Mr. Ignatieff is a rarity: a public intellectual who once held the title of Leader of Her Majesty’s Loyal Opposition. That word “loyal” is telling, as Mr. Ignatieff explained in an address at Stanford University earlier this month. “The opposition performs an adversarial function critical to democracy itself,” Mr. But that vital underpinning of respect is being lost in the United States, where a Democratic president is fighting for re-election against a Republican opponent whose supporters, in some cases, maintain the President seized office illegally using a forged birth certificate. And although Mr. You could argue this is sour grapes.

In his speech, Mr. First Nations’ rights at risk with new China trade deal   A new trade deal between Canada and China could put the rights of investors above those of First Nation governments. 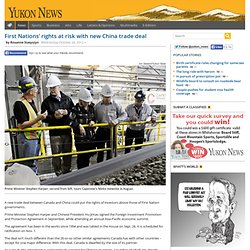 Prime Minister Stephen Harper and Chinese President Hu Jintao signed the Foreign Investment Promotion and Protection Agreement in September, while attending an annual Asia-Pacific economic summit. Kenney Defends Bid For Power To Block Foreigners. Immigration Minister Jason Kenney tried to convince a parliamentary committee Wednesday of the need for a new ministerial power that would allow him to bar certain people from coming to Canada for "public policy" reasons. 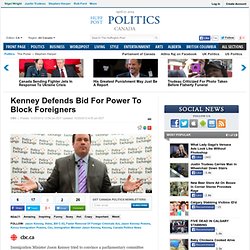 The power is contained in the contentious new Bill C-43, dubbed the Faster Removal of Foreign Criminals Act, which would also create stiffer terms for the deportation of non-citizens who commit crimes in Canada. The bill passed second reading and is now under study by the Commons immigration committee. Kenney tabled new guidelines that he says would guide himself and any future immigration minister in barring people from Canada. He added he would use the new power sparingly in the national interest, not to further his political agenda.

Commend budget officer Kevin Page for tenacity of a true “watchdog” The Harper government had pledged to create a totally independent “budget watchdog.” 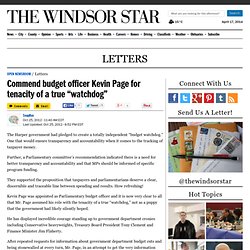 One that would ensure transparency and accountability when it comes to the tracking of taxpayer money. Further, a Parliamentary committee’s recommendation indicated there is a need for better transparency and accountability and that MPs should be informed of specific program funding. They supported the proposition that taxpayers and parliamentarians deserve a clear, discernible and traceable line between spending and results. Government lawyer Edgar Schmidt courageously blows the whistle: Editorial. Even at the risk of his reputation and livelihood, Edgar Schmidt couldn’t stay quiet any longer. For more than a decade, the senior justice department lawyer has been trying to convince his bosses that they are breaking the law by inadequately evaluating whether proposed bills violate the Charter of Rights and Freedoms. When he was finally satisfied that no one would ever listen to him, he decided to sue the government.

Before a federal judge last week, Schmidt maintained that government lawyers are instructed to raise possible Charter conflicts only when the violations are unambiguous. Tim Harper: Kevin Page’s battle with Conservatives is fundamental to Parliament. OTTAWA—Every so often a story bubbles up in the capital that is so important it demands attention, even if it is too easily dismissed as eye-glazing process. Any yarn that includes the Parliamentary Budget Officer, the Federal Court, spending cuts and deputy ministers admittedly lacks the ingredients of a potboiler.

Kevin Page, the Parliamentary Budget Officer, set the end of business hours on Friday as the final deadline for government departments to report the savings and reduction measures contained in the last budget. On Sunday, after six months of requesting this information, Page confirmed his office "will be filing and serving legal notice on all non-compliant Deputy Heads early this week. " The Rise of Tyranny and the Imminent Fall of Canada by 2014 « thebishopsviews. I had occasion last week to be in the area of the Niagara peninsula meeting with other members of the Anglican Church of Canada.

Police State Canada The Emergence Into Fascism.flv. Ottawa’s plan for museums met with skepticism, outrage. Ontario Humanist Society « Harper’s C-10 does not conform with UN Convention on the Rights of the Child. Why Austerity is Nonsense Explained In Five Minutes! Kevin Page forces the Conservatives to back down. My Column in the Ottawa Citizen: Why the Harper Government’s Succession Bill Is Unconstitutional. Editorial: Mortgage meddling. INSULT: Government agency rebrands Canada "Harper Canada"