Initiative, Referendum and Recall. Initiative In political terminology, the initiative is a process that enables citizens to bypass their state legislature by placing proposed statutes and, in some states, constitutional amendments on the ballot. 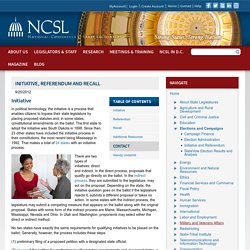 (1) preliminary filing of a proposed petition with a designated state official; (2) review of the petition for conformance with statutory requirements and, in several states, a review of the language of the proposal; (3) preparation of a ballot title and summary; (5) submission of the petitions to the state elections official, who must verify the number of signatures. Log In. Not all states, though, allow voters to weigh in on changes to state statutes and laws. 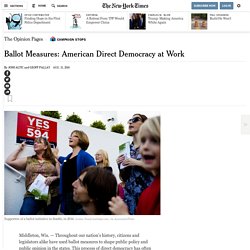 Legislators in 23 states can refer changes to a state’s statutes to the ballot. As with constitutional amendments, voters can approve or reject only the laws that their legislature decides to place before them. While a majority of ballot measures work like this — in other words, are legislatively referred — two other types of measures, initiatives and referendums, tend to attract more media attention, money and controversy. The unique nature of these measures stems from their origins: the citizenry.

Ballot initiatives are devised by voters, who then circulate a petition for signatures from other registered voters. Citizens, too, can gain a veto referendum, or simply a referendum, by collecting enough signatures to place a law that has been passed by the state legislature on the ballot. But the perseverance of initiative and referendum supporters paid off. Continue reading the main story. 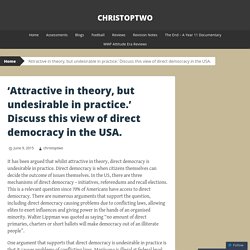 A further argument that supports that direct democracy is undesirable is it gives the chance for elites to exert their influence. Direct Democracy: Lessons from the United States. A century ago, direct democracy – referendums, the recall of elected officials, and citizen initiated laws – played little role in governing any place other than Switzerland. 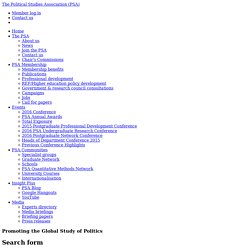 The changes since then in popular expectations and democratic practice have been remarkable. Today, the use of referendums and popular votes on citizen-drafted laws (the initiative) is widespread and increasing. Citizens in established democracies have come to view direct popular votes on political issues as an important component of how democracy is supposed to work. Clearly people now expect voters, not representatives, to decide the fate of major issues. When Europeans were asked in 2012 to rate how important it was for democracy that ‘citizens have the final say on important issues by voting on them directly in referendums’ their average response on a zero-to-ten scale was between eight and nine.

Democratic Perceptions Figure 1. Figure 2. All of this presents a dilemma for representative democracy. Figure 3. Ohio marijuana: Voters reject plans to make drug legal. Image copyright AP Voters in the US state of Ohio have rejected proposals to make marijuana legal, according to local media projections. 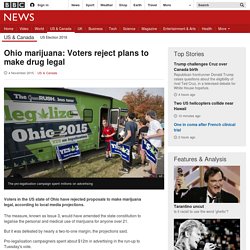 The measure, known as Issue 3, would have amended the state constitution to legalise the personal and medical use of marijuana for anyone over 21. But it was defeated by nearly a two-to-one margin, the projections said. Pro-legalisation campaigners spent about $12m in advertising in the run-up to Tuesday's vote. Issue 3 would have granted rights for marijuana to be grown commercially at 10 sites across Ohio, which critics said could have created a monopoly.

The backers of the 10 growing sites had many famous names as investors, including former pop singer Nick Lachey, fashion designer Nanette Lepore and Woody Taft, a descendant of President William Howard Taft. The legalisation measure would have allowed marijuana, pot-infused sweets and other related products to be purchased in stores. More than 20 states permit its use for medical purposes. Pressure groups and direct democracy. Case study pressure groups and marijuana.