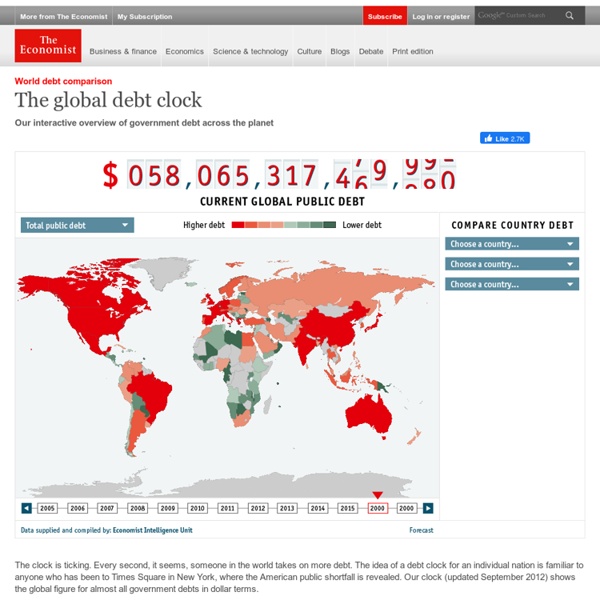 The clock is ticking. Every second, it seems, someone in the world takes on more debt. The idea of a debt clock for an individual nation is familiar to anyone who has been to Times Square in New York, where the American public shortfall is revealed. Our clock (updated September 2012) shows the global figure for almost all government debts in dollar terms. Does it matter? After all, world governments owe the money to their own citizens, not to the Martians. Notes: This interactive graphic displays gross government debt for the globe.

indonesia richest 4 The four richest men in Indonesia own as much wealth as the country’s poorest 100 million citizens, despite the nation’s president repeatedly pledging to fighting “dangerous” levels of inequality.. Oxfam on Thursday highlighted Indonesia as one of the most unequal countries in the world, where the number of dollar billionaires has increased from one in 2002 to 20 in 2016. The development charity worked out that the four richest Indonesians – led by brothers Budi and Michael Hartono – control $25bn of assets, which is roughly equal to the wealth of the poorest 40% of Indonesia’s 250 million population. The charity said the Hartonos – who own a clove cigarette company – could earn enough interest on their fortune in a year to eradicate extreme poverty in Indonesia.

Ikea Science Fiction by Susana Polo | 11:53 am, May 9th, 2011 I could make some joke here about how Ikea directions always make me feel like I’m expected to build something that’s bigger on the inside, but I actually have never had that much trouble following Ikea directions THERE I SAID IT. Seriously, if you’ve ever put together some Lego sets, you already have all the experience you need. No, the problem I always seem to have is with the furniture where you have to pick up extra parts that aren’t expressly mentioned all over the boxes of the parts you already have, and I find that I’ve left a vital element of a bed, like the bits that hold up the mattress, at the warehouse. And then I sleep on the couch. (via College Humor.)

INFOGRAPHIC: Where the world’s poorest will live in 2015 This infographic from the OECD Development Assistance Committee projects which countries will be home to the world’s poorest people by 2015, and compares this to the picture in 2005. Part of their report Fragile states 2013: Resource flows and trends in a shifting world it reveals that by 2015, half of the world’s people living on less than USD 1.25 a day will be in fragile states. And while poverty has decreased globally, progress on Millennium Development Goal (MDG) 1 to halve poverty is slower in fragile states than in other developing countries. While India will still have the second largest population living in extreme poverty, the reduction from 2005 is incredible. China is also projected to reduce poverty dramatically.

UNESCO World Heritage List #: As for 19 Natural and Mixed Properties inscribed for geological values before 1994, criteria numbering of this property has changed. See Decision 30.COM 8D.1 The Dangers of Pricing the Infinite “The notion of infinite debt comes in when this logic slams up against the Absolute, or, one might perhaps better say, against something that utterly defies the logic of exchange. Because there are things that do. This would explain, for instance, the odd urge to first quantify the exact amount of milk one has absorbed at one’s mother’s breast, and then to say that there is no conceivable way to repay it.” – David Graeber, Debt “Could all of this be thought ‘a normal upbringing’? Everyone seemed to think so and my parents, bless them, paid for it. So much that my father proudly presented me with a complete set of receipts on my twenty-first.” – Derek Jarman, At Your Own Risk

amazon empire Amazon has shipped more than 400 items per second at its peak. How did it grow from bookseller to retail giant? 954items shipped in the time you’ve been on this page Maps ETC Homepage Welcome to ETC's collection of historic maps. Here you will find over 5,000 maps representing many different time periods. A friendly license allows teachers and students to use up to 25 maps in non-commercial school projects without further permission. All maps are available as GIF or JPEG files for screen display as well as in PDF for printing. Use the GIF or JPEG maps for classroom presentations and student websites.

China, technology and the U.S. middle class President Barack Obama’s State of the Union speech this week confirmed it: The pre-eminent political and economic challenge in the industrialized democracies is how to make capitalism work for the middle class. There is nothing mysterious about that. The most important fact about the United States in this century is that middle-class incomes are stagnating. The financial crisis has revealed an equally stark structural problem in much of Europe.

Favorite Travel Quotes "There are two ways of getting home, and one of them is to stay there." -G.K. Chesterton ”Wherever you go, go with all your heart.” -Confucius “I would rather live in a world where my life is surrounded by mystery than live in a world so small that my mind could comprehend it.” "Does Debt Matter?" by Robert Skidelsky Exit from comment view mode. Click to hide this space LONDON – Europe is now haunted by the specter of debt. All European leaders quail before it. To exorcise the demon, they are putting their economies through the wringer.

amazon antitrust paradox abstract. Amazon is the titan of twenty-first century commerce. In addition to being a retailer, it is now a marketing platform, a delivery and logistics network, a payment service, a credit lender, an auction house, a major book publisher, a producer of television and films, a fashion designer, a hardware manufacturer, and a leading host of cloud server space. Although Amazon has clocked staggering growth, it generates meager profits, choosing to price below-cost and expand widely instead. 2_Darwin%20tree-11130.html from suntimes.com When I began as a film critic, Jean-Luc Godard was widely thought to have reinvented the cinema with "Breathless" (1960). Now he is almost 80 and has made what is said to be his last film, and he's still at the job, reinventing. If only he had stopped while he was ahead. That would have been sometime in the 1970s.