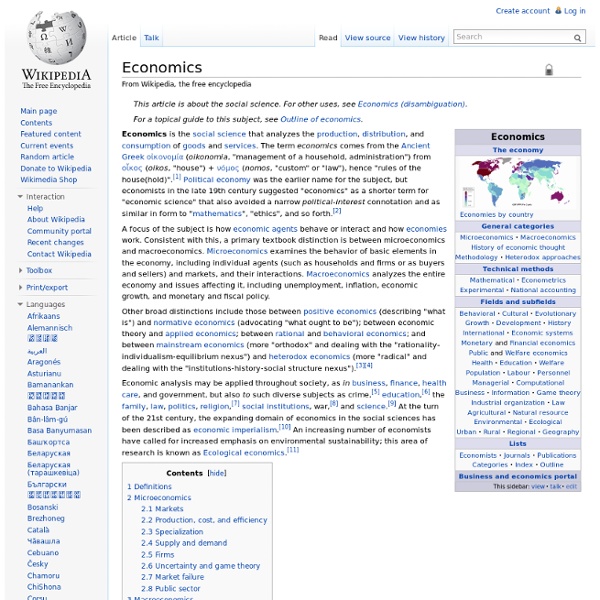 For a topical guide to this subject, see Outline of economics. Economics is the social science that studies the behavior of individuals, households, and organizations (called economic actors, players, or agents), when they manage or use scarce resources, which have alternative uses, to achieve desired ends. Agents are assumed to act rationally, have multiple desirable ends in sight, limited resources to obtain these ends, a set of stable preferences, a definite overall guiding objective, and the capability of making a choice. The traditional concern of economics is to gain an understanding of the processes that govern the production, distribution and consumption of goods and services in an exchange economy.[3] An agent may have purposes or ends, such as reducing or protecting individuals from crime, on which he or she wants to spend resources. Definitions There are a variety of modern definitions of economics. J. Economics is a study of man in the ordinary business of life. Microeconomics Related:  The problems with philosophy

Linguistics In the early 20th century Ferdinand de Saussure distinguished between the notions of langue and parole in his formulation of structural linguistics. According to him, parole is the specific utterance of speech, whereas langue refers to an abstract phenomenon that theoretically defines the principles and system of rules that govern a language.[9] This distinction resembles the one made by Noam Chomsky between competence and performance, where competence is individual's ideal knowledge of a language, while performance is the specific way in which it is used.[10] In classical Indian philosophy of language, the Sanskrit philosophers like Patanjali and Katyayana had distinguished between sphota (light) and dhvani (sound). In the late 20th century, French philosopher Jacques Derrida distinguished between the notions of speech and writing.[11] Nomenclature[edit] Variation and Universality[edit] Lexicon[edit] The lexicon is a catalogue of words and terms that are stored in a speaker's mind.

Utility Economic definitions[edit] In economics, utility is a representation of preferences over some set of goods and services. Preferences have a (continuous) utility representation so long as they are transitive, complete, and continuous. Utility is usually applied by economists in such constructs as the indifference curve, which plot the combination of commodities that an individual or a society would accept to maintain a given level of satisfaction. In finance, utility is applied to generate an individual's price for an asset called the indifference price. Quantifying utility[edit] It was recognized that utility could not be measured or observed directly, so instead economists devised a way to infer underlying relative utilities from observed choice. Utility is taken to be correlative to Desire or Want. Cardinal and ordinal utility[edit] Economists distinguish between cardinal utility and ordinal utility. Utility functions of both sorts assign a ranking to members of a choice set. implies .

Microeconomics This is in contrast to macroeconomics, which involves the "sum total of economic activity, dealing with the issues of growth, inflation, and unemployment."[2] Microeconomics also deals with the effects of national economic policies (such as changing taxation levels) on the aforementioned aspects of the economy.[4] Particularly in the wake of the Lucas critique, much of modern macroeconomic theory has been built upon 'microfoundations'—i.e. based upon basic assumptions about micro-level behavior. Assumptions and definitions[edit] Microeconomic theory progresses by defining a competitive budget set which is a subset of the consumption set. The utility maximization problem is the heart of consumer theory. The utility maximization problem is a simple constrained optimization problem in which an individual seeks to maximize utility subject to a budget constraint. The theory of supply and demand usually assumes that markets are perfectly competitive. Microeconomic topics[edit] Monopoly[edit]

History flash map, Maps on Indian History, Maps of Indian History, India history map, map of Indian history History of India is varied and rich. It has its share of joys and sorrows and yet has marched proudly with the times and has come up a winner in the modern times. Indian history is made up of many cultures of the rulers who invaded India and expanded their empire here. Timeline Ancient India The Indian subcontinent in the ancient times comprised of Pakistan, Bangladesh, Nepal, Tibet and Myanmar. The beginning of the Indus valley civilization can be dated back to 3000BC. Timeline Medieval India 1290 AD, Jalal ud-din Firuz establishes his sultanate at Delhi and here begins the rule of the Mughul Empire in India. Timeline modern India In 1751 AD, Britain becomes the most powerful colonial power in India and defeats Siraj-ud-daulah and seizes power of the northern parts of India. By then the freedom struggle was spread all over the country and people were now against the British rule.

Bilateral and regional co-operation Archives - IAS MAINS Latin America has remained at the periphery of Indian political and economic strategy, having presented no significant challenges, received marginal Indian migration (mainly in the Caribbean/Atlantic), and, depending on the country, having limited or no historic or cultural connections with India. In this century, however, economic exchanges, particularly in the energy sector have been significant. The South American continent, along with Central America and the Caribbean (LAC), and their Exclusive Economic Zones (EEZ) are rich in oil and gas, with probable, and even proven, estimates of reserves rising every year. In Venezuela, whose hydrocarbon reserves, as per latest estimates of the OPEC, at 296.5 billion barrels exceed those of Saudi Arabia, ONGC Videsh Ltd (OVL) signed a joint venture (JV) agreement with Venezuela’s state oil company PdVSA, acquiring a 40 percent share in the San Cristobal oil field. In Trinidad and Tobago (T&T), Gas Authority of India Ltd.

Utilitarianism Utilitarianism is influential in political philosophy. Bentham and Mill believed that a utilitarian government was achievable through democracy. Mill thought that despotism was also justifiable through utilitarianism as a transitional phase towards more democratic forms of governance. As an advocate of liberalism, Mill stressed the relationship between utilitarianism and individualism.[10] Historical background[edit] The importance of happiness as an end for humans has long been recognized. Although utilitarianism is usually thought to start with Jeremy Bentham, there were earlier writers who presented theories that were strikingly similar. Hume says that all determinations of morality, this circumstance of public utility principally important. In the first three editions of the book, Hutcheson included various mathematical algorithms "...to compute the Morality of any Actions." This pursuit of happiness is given a theological basis:[22] …actions are to be estimated by their tendency.