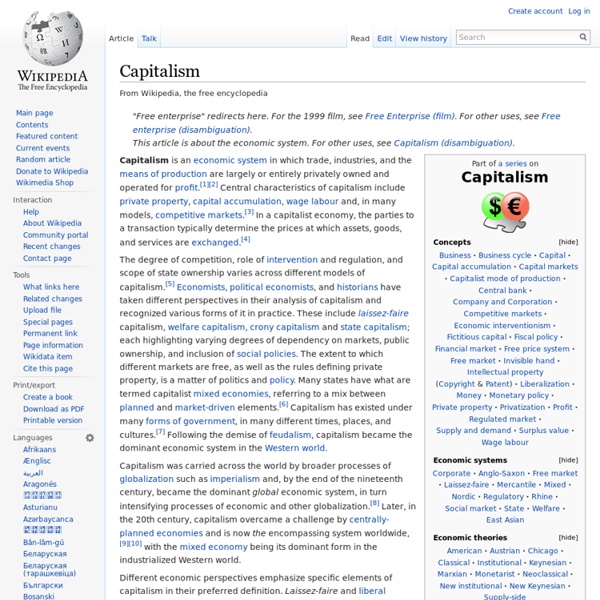 The degree of competition, role of intervention and regulation, and scope of state ownership varies across different models of capitalism.[5] Economists, political economists, and historians have taken different perspectives in their analysis of capitalism and recognized various forms of it in practice. These include laissez-faire capitalism, welfare capitalism, crony capitalism and state capitalism; each highlighting varying degrees of dependency on markets, public ownership, and inclusion of social policies. The extent to which different markets are free, as well as the rules defining private property, is a matter of politics and policy. Many states have what are termed capitalist mixed economies, referring to a mix between planned and market-driven elements.[6] Capitalism has existed under many forms of government, in many different times, places, and cultures.[7] Following the demise of feudalism, capitalism became the dominant economic system in the Western world. Etymology[edit]

Anglo-Saxon economy The Anglo-Saxon model or Anglo-Saxon capitalism (so called because it is practiced in English-speaking countries such as the United Kingdom, the United States, Canada, New Zealand, Australia[1] and Ireland [2]) is a capitalist model that emerged in the 1970s[citation needed], based on the Chicago school of economics[citation needed]. However, its origins date to the 18th century in the United Kingdom under the ideas of the classical economist Adam Smith. Disagreements over meaning[edit] Proponents of the term "Anglo-Saxon economy" argue that the economies of these countries currently are so closely related in their liberalist and free market orientation that they can be regarded as sharing a specific macroeconomic model. However, those who disagree with the use of the term claim that the economies of the these countries differ as much from each other as they do from the "welfare capitalist" economies of northern and continental Europe. See also[edit] References[edit] Bibliography[edit]

Agrarianism Agrarianism has two common meanings. The first meaning refers to a social philosophy or political philosophy which values rural society as superior to urban society, the independent farmer as superior to the paid worker, and sees farming as a way of life that can shape the ideal social values.[1] It stresses the superiority of a simpler rural life as opposed to the complexity of city life, with its banks and factories. The American Thomas Jefferson was a representative agrarian who built Jeffersonian Democracy around the notion that farmers are “the most valuable citizens” and the truest republicans.[2] The philosophical roots of agrarianism include European and Chinese philosophers. Secondly, the term "agrarianism" means political proposals for land redistribution, specifically the distribution of land from the rich to the poor or landless. Philosophy[edit] M. History[edit] Greece and Rome[edit] In Greece, Hesiod, Aristotle, and Xenophon promoted agrarian ideas. 20th century[edit]

Fascism Fascism (/ˈfæʃɪzəm/) is a form of radical authoritarian ultranationalism,[1][2] characterized by dictatorial power, forcible suppression of opposition and strong regimentation of society and of the economy,[3] which came to prominence in early 20th-century Europe.[4] The first fascist movements emerged in Italy during World War I before it spread to other European countries.[4] Opposed to liberalism, Marxism and anarchism, fascism is usually placed on the far-right within the traditional left–right spectrum.[5][6][7][4][8][9] Fascists saw World War I as a revolution that brought massive changes to the nature of war, society, the state and technology. The advent of total war and the total mass mobilization of society had broken down the distinction between civilians and combatants. Etymology Definitions John Lukacs, Hungarian-American historian and Holocaust survivor, argues that there is no such thing as generic fascism. Position in the political spectrum "Fascist" as a pejorative History

William Shatner Shatner has also worked as a musician; an author; screenwriter and director; celebrity pitchman; and a passionate owner, trader, breeder, rider, and aficionado of horses. Early life[edit] Shatner was born in the Notre-Dame-de-Grâce neighbourhood of Montréal, Québec, Canada, to a Conservative Jewish household.[3] His parents are Anne (née Garmaise) and Joseph Shatner, a clothing manufacturer.[4][5] He has two sisters, Joy and Farla.[6] His paternal grandfather, Wolf Schattner, anglicized the family name to "Shatner".[7] All of Shatner's four grandparents were Jewish immigrants (from Austria-Hungary, Ukraine, and Lithuania).[8][9] Acting career[edit] Early stage, film, and television work[edit] Shatner publicity photo, 1958 In 1954, he was cast as Ranger Bob on The Canadian Howdy Doody Show.[18] Shatner was an understudy to Christopher Plummer; the two would later appear as adversaries in Star Trek VI: The Undiscovered Country. Star Trek[edit] Shatner as Capt. 1970s[edit] Kirk returns and T.

Bolshevik The Bolsheviks were the majority faction in a crucial vote, hence their name. They ultimately became the Communist Party of the Soviet Union.[6] The Bolsheviks came to power in Russia during the October Revolution phase of the Russian Revolution of 1917, and founded the Russian Soviet Federative Socialist Republic which would later become the chief constituent of the Soviet Union in 1922. The Bolsheviks, founded by Vladimir Lenin and Alexander Bogdanov, were by 1905 a major organization consisting primarily of workers under a democratic internal hierarchy governed by the principle of democratic centralism, who considered themselves the leaders of the revolutionary working class of Russia. Their beliefs and practices were often referred to as Bolshevism. History of the split[edit] In the 2nd Congress of the Russian Social Democratic Labour Party, held in Brussels and London during August 1903, Lenin and Julius Martov disagreed over the membership rules. Origins of the name[edit]

Pope finds a new enemy - capitalism Pope Francis's attack on some of the values of capitalism has reignited a long-running debate about whether the free market is compatible with Christianity. The recently elected Pope continued his revitalization of the Church with an outspoken statement against the "new tyranny" of "unfettered capitalism." (Read more: Pope Francis on capitalism) "Some people continue to defend trickle-down theories which assume that economic growth,encouraged by a free market, will inevitably succeed in bringing about greater justice and inclusiveness in the world,"he wrote, in a direct rebuttal of the theory espoused by free-market thinkers that wealth eventually benefits the whole of society. "This opinion, which has never been confirmed by the facts, expresses a crude and naive trust in the goodness of those wielding economic power and in the sacralised workings of the prevailing economic system." In essence, no to Gordon Gekko, yes to Bill Gates. (Read more: Vatican opens its books)

Nationalism Nationalism is a belief, creed or political ideology that involves an individual identifying with, or becoming attached to, one's nation. Nationalism involves national identity, by contrast with the related construct of patriotism, which involves the social conditioning and personal behaviors that support a state's decisions and actions.[1] From a psychological perspective, nationalism (national attachment) is distinct from other types of attachment, for example, attachment to a religion or a romantic partner. The desire for interpersonal attachment, or the need to belong, is one of the most fundamental human motivations. From a political or sociological perspective, there are two main perspectives on the origins and basis of nationalism. There are various definitions for what constitutes a nation, however, which leads to several different strands of nationalism. History[edit] The term nationalism was first used by Johann Gottfried Herder the prophet of this new creed. Causes[edit]