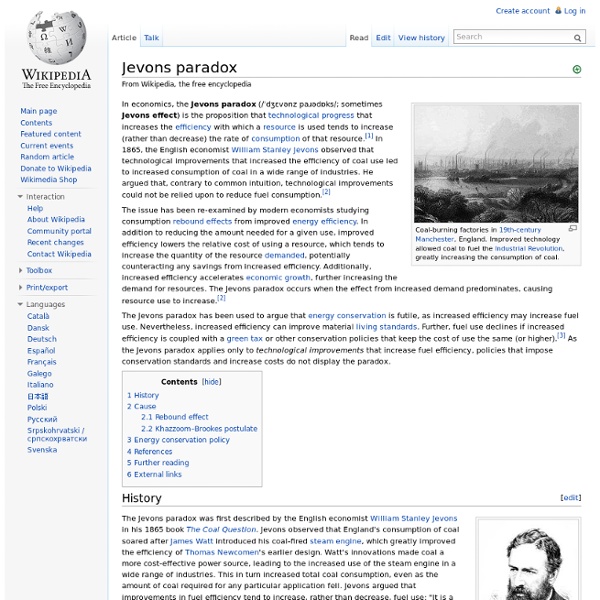 The Jevons paradox has been used to argue that energy conservation may be futile, as increased efficiency may increase fuel use. Nevertheless, increased efficiency can improve material living standards. Further, fuel use declines if increased efficiency is coupled with a green tax or other conservation policies that keep the cost of use the same (or higher).[3] As the Jevons paradox applies only to technological improvements that increase fuel efficiency, policies that impose conservation standards and increase costs do not display the paradox. History[edit] The Jevons paradox was first described by the English economist William Stanley Jevons in his 1865 book The Coal Question. Jevons observed that England's consumption of coal soared after James Watt introduced his coal-fired steam engine, which greatly improved the efficiency of Thomas Newcomen's earlier design. Cause[edit] Rebound effect[edit] Khazzoom–Brookes postulate[edit] Energy conservation policy[edit] See also[edit] Related:  veselinihilista

Leafy sea dragon The leafy seadragon or Glauert's seadragon,[1] Phycodurus eques, is a marine fish in the family Syngnathidae, which also includes the seahorses. It is the only member of the genus Phycodurus. It is found along the southern and western coasts of Australia. Popularly known as "leafies", it is the marine emblem of the state of South Australia and a focus for local marine conservation.[2][3] Description[edit] Much like the seahorse, the leafy seadragon's name is derived from its resemblance to another creature (in this case, the mythical dragon). Leafy Seadragon The lobes of skin that grow on the leafy seadragon provide camouflage, giving it the appearance of seaweed.[4] It is able to maintain the illusion when swimming, appearing to move through the water like a piece of floating seaweed. The creature feeds by sucking up small crustaceans, such as amphipods and mysid shrimp, plankton, and larval fish through its long, pipe-like snout.[2] Leafy Seadragons usually live a solitary lifestyle.

Growth Has an Expiration Date Bio Tom Murphy Tom Murphy is an associate professor of physics at the University of California, San Diego. He currently leads a project to test General Relativity by bouncing laser pulses off of the reflectors left on the Moon by the Apollo astronauts, achieving one-millimeter range precision. Murphy's keen interest in energy topics began with his teaching a course on energy and the environment for non-science majors at UCSD. He has explored the quantitatively convincing case that our pursuit of an ever-bigger scale of life faces gigantic challenges and carries significant risks. Click on any word within the transcript to jump to that point in the program. next previous cancel To download this program become a Front Row member. ZOOM IN: Learn more with related books and additional materials. For related Britannica content, please search on Britannica's Web site, at www.britannica.com.

A Plan to Power 100 Percent of the Planet with Renewables In December leaders from around the world will meet in Copenhagen to try to agree on cutting back greenhouse gas emissions for decades to come. The most effective step to implement that goal would be a massive shift away from fossil fuels to clean, renewable energy sources. If leaders can have confidence that such a transformation is possible, they might commit to an historic agreement. A year ago former vice president Al Gore threw down a gauntlet: to repower America with 100 percent carbon-free electricity within 10 years. Select an option below: Customer Sign In *You must have purchased this issue or have a qualifying subscription to access this content Are Market GM Plants an Unrecognized Platform for Bioterrorism and Biocrime? Mon (emblem) Mon (紋?), also monshō (紋章?), mondokoro (紋所?), and kamon (家紋?) Mon may have originated as fabric patterns to be used on clothes in order to distinguish individuals or signify membership in a specific clan or organization. Japanese traditional formal attire generally displays the mon of the wearer. Rules regulating the choice and use of mon were somewhat limited, though the selection of mon was generally determined by social customs. There are no set rules in the design of a mon. Similar to the blazon in European heraldry, mon are also named by the content of the design, even though there is no set rule for such names. The degree of variation tolerated differ from mon to mon as well. Japanese heraldry does not have a cadency or quartering system, but it is not uncommon for cadet branches of a family to choose a slightly different mon from the senior branch. Mon are essentially monochrome; the color does not constitute part of the design and they may be drawn in any color. See also ja:家紋の一覧

How to power America with renewables on the cheap: Build a shit ton of wind and solar capacity America could be powered almost entirely with wind turbines and solar systems by 2030 at a cost comparable to what we’re spending for dirty power today, a new study finds. The necessary approach would surprise most people, and it would generate enough economic activity to make any capitalist drool: Build, build, build … and then build some more. From Midwest Energy News: The analysis … challenges the common notion that wind and solar power need to be paired with fossil fuel or nuclear generators, so utilities can meet electricity demand when it’s not windy or sunny.The paper instead proposes building out a “seemingly excessive” amount of wind and solar generation capacity — two to three times the grid’s actual peak load. By spreading that generation across a wide enough geographic area, Rust Belt utilities could get virtually all of their electricity from renewables in 2030, at a cost comparable to today’s prices, it says. So keep those wind and solar farms coming, America.

Spinosaurus Description Size Life restoration of S. aegyptiatus Since its discovery, Spinosaurus has been a contender for the longest and largest theropod dinosaur. Dal Sasso et al. (2005) assumed that Spinosaurus and Suchomimus had the same body proportions in relation to their skull lengths, and thereby calculated that Spinosaurus was 16 to 18 meters (52 to 59 ft) in length and 7 to 9 tonnes (6.9 to 8.9 long tons; 7.7 to 9.9 short tons) in weight.[4] The Dal Sasso et al. estimates were criticized because the skull length estimate was uncertain, and (assuming that body mass increases as the cube of body length) scaling Suchomimus which was 11 meters (36 ft) long and 3.8 tonnes (4.2 short tons) in mass to the range of estimated lengths of Spinosaurus would produce an estimated body mass of 11.7 to 16.7 tonnes (12.9 to 18.4 short tons).[5] Size comparison of selected giant theropod dinosaurs, S. aegyptiacus in red. Neural spines Illustration of S. aegyptiacus dorsal vertebrae by Ernst Stromer. Skull

Listen, Little Man! The Oil Drum | Discussions about Energy and Our Future