What is Democracy?: 17/05/2016, Behind the News. Planes and buses start criss-crossing the country for the start of the 2016 federal election campaign. 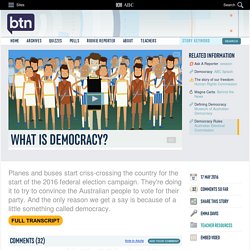 They're doing it to try to convince the Australian people to vote for their party. And the only reason we get a say is because of a little something called democracy. Long, long ago in ancient Greece, the people of Athens were in danger. NOBLE BOY: Did you hear the Persians are planning to attack us? NOBLE GIRL: Yeah, we might have to do something about it. But not everyone in the city wanted to. POOR GIRL: I'm not too keen on this whole war thing, I wish I could have a say.POOR BOY: Maybe we can? To give the people more of a say on big decisions like this, the Greeks came up with something they called democracy! NOBLE GIRL: OK here's the idea. PEOPLE: Yay! Well they didn't really mean everyone. NOBLE GIRL: Oh wait, we won’t let women vote, slaves vote or anyone too poor. Democracy. A democracy is a form of government in which the people, either directly or indirectly, take part in governing. 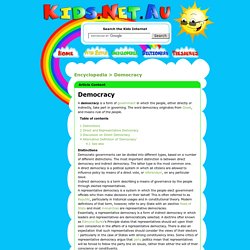 The word democracy originates from Greek, and means rule of the people. Distinctions Democratic governments can be divided into different types, based on a number of different distinctions. The most important distinction is between direct democracy and indirect democracy. The latter type is the most common one. A direct democracy is a political system in which all citizens are allowed to influence policy by means of a direct vote, or referendum, on any particular issue. 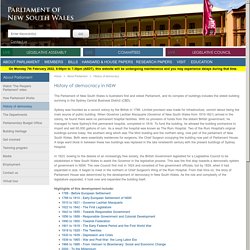 Sydney was founded as a convict colony by the British in 1788. Limited provision was made for infrastructure, convict labour being the main source of public building. When Governor Lachlan Macquarie (Governor of New South Wales from 1810-1821) arrived in the colony, he found there were no permanent hospital facilities. With no provision of funds from the distant British government, he managed to have Sydney's first permanent hospital, completed in 1816. In 1823, bowing to the desires of an increasingly free society, the British Government legislated for a Legislative Council to be established in New South Wales to assist the Governor in the legislative process.

Parliamentary Education Office. Exploring Democracy · Milestones in Australian democracy · Museum of Australian Democracy at Old Parliament House. From the 1890s it was common for Aboriginal workers to be paid in rations of food and clothing. 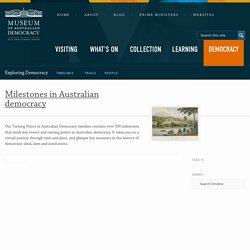 During the 1920s some workers began to receive minimal wages and, by 1936, pastoralists were required by law to provide shelter and meet the medical needs of their workers. However, this law was never enforced and Aboriginal stockmen continued to live in sub-standard conditions and receive wages well below those paid to white stockmen. In 1942, a secret Aboriginal law meeting was held to discuss a strike proposal involving 200 law men from 23 Aboriginal groups. After six weeks a consensus was reached to begin a strike on 1 May, the international day of workers' struggles. Government. Australia was one of the first countries to establish democracy in the modern world. 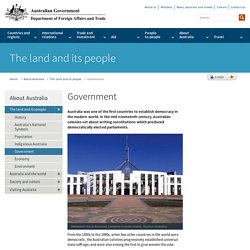 In the mid-nineteenth century, Australian colonies set about writing constitutions which produced democratically elected parliaments. How Government Works. Levels of Government: 31/05/2016, Behind the News. Federal pollies are still running around the country and doing debates trying to convince people to vote for them. 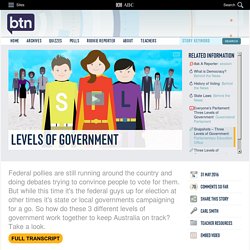 But while this time it's the federal guys up for election at other times it's state or local governments campaigning for a go. So how do these 3 different levels of government work together to keep Australia on track? Take a look. In a land called Australia, three super heroes fight for the people. Federal woman, State man and Local boy. 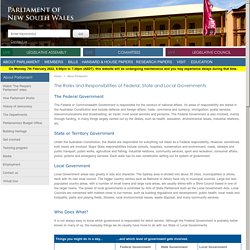 Its areas of responsibility are stated in the Australian Constitution and include defence and foreign affairs; trade, commerce and currency; immigration; postal services, telecommunications and broadcasting; air travel; most social services and pensions. Levels of government - ABC online education. In a land called Australia, three super heroes fight for the people. 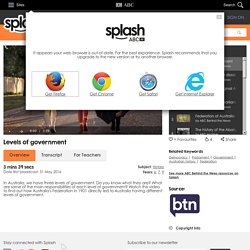 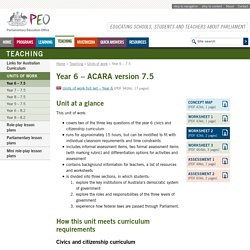 Teacher Resources - AEC for schools. Australia is a representative democracy in which all Australians over 18 years vote for people to represent them, and make decisions on their behalf. 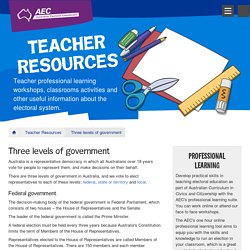