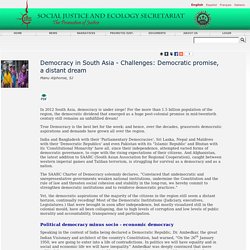 For the more than 1.5 billion population of the region, the democratic dividend that emerged as a huge post-colonial promise in mid-twentieth century still remains an unfulfilled dream! True Democracy is the best bet for the week; and hence, over the decades, grassroots democratic aspirations and demands have grown all over the region. India and Bangladesh with their 'Parliamentary Democracies', Sri Lanka, Nepal and Maldives with their 'Democratic Republics' and even Pakistan with its "Islamic Republic' and Bhutan with its 'Constitutional Monarchy' have all, since their independence, attempted varied forms of democratic governance, to cope with the rising expectations of their citizens.

In Southeast Asia, Indonesia Is an Unlikely Role Model for Democracy. Photo JAKARTA, Indonesia — For a while, it looked as if Indonesia’s bad old days had returned. 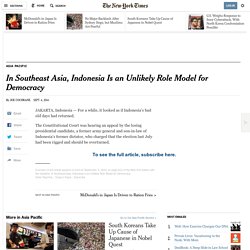 Southeast Asia Retreats From Democracy. After decades of greater democratization, a new report says that democracy is in retreat throughout ASEAN. 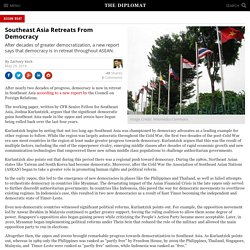 After nearly two decades of progress, democracy is now in retreat in Southeast Asia according to a new report by the Council on Foreign Relations. The working paper, written by CFR Senior Fellow for Southeast Asia, Joshua Kurlantzick, argues that the significant democratic gains Southeast Asia made in the 1990s and 2000s have begun being rolled back over the last four years. The State of Democracy in Asia. Mar 8, 2012 A lecture given at Colorado College by NED Senior Director Brian Joseph Introduction First, let me begin by thanking Professors Alberts and Takeshi, and the History, Asian Studies and Political Science departments for inviting me to speak here tonight. 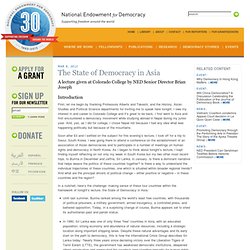 I owe my interest in and career to Colorado College and it’s great to be back. I first went to Asia and first encountered a democracy movement while studying abroad in Nepal during my junior year. Soon after Eli and I settled on the subject for this evening’s lecture, I took off for a trip to Seoul, South Korea. Limits to China's authoritarian development. The recent slowdown in China's economic growth rate has highlighted the limits in the country's authoritarian growth model. 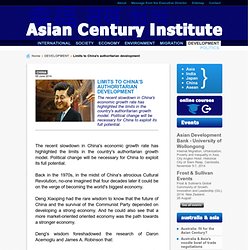 Political change will be necessary for China to exploit its full potential. Back in the 1970s, in the midst of China's atrocious Cultural Revolution, no-one imagined that four decades later it could be on the verge of becoming the world's biggest economy. Deng Xiaoping had the rare wisdom to know that the future of China and the survival of the Communist Party depended on developing a strong economy. And he could also see that a more market-oriented oriented economy was the path towards a stronger economy. The World Today - Why China won't lead the Asian Century 01/07/2014.

ELEANOR HALL: For many of the world's leaders it is not a question of if but when China will replace the US as the global superpower. 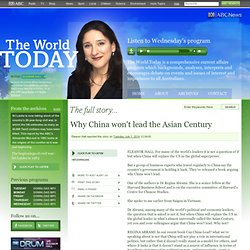 But a group of business experts who travel regularly to China say the country's government is holding it back. They've released a book arguing why China won't lead. Democratic Governance 2030. “Democratic governance will thrive in Asia, once Asian narratives – myths and metaphors – are used to provide support and give meaning to it.” 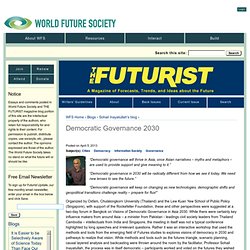 “Democratic governance in 2030 will be radically different from how we see it today. We need new lenses to see the future.” “Democratic governance will keep on changing as new technologies, demographic shifts and geopolitical transitions challenge reality – prepare for flux!” DEMOCRACY. THE most striking thing about the founders of modern democracy such as James Madison and John Stuart Mill is how hard-headed they were. 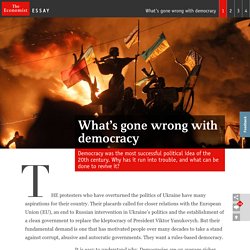 They regarded democracy as a powerful but imperfect mechanism: something that needed to be designed carefully, in order to harness human creativity but also to check human perversity, and then kept in good working order, constantly oiled, adjusted and worked upon. The need for hard-headedness is particularly pressing when establishing a nascent democracy. One reason why so many democratic experiments have failed recently is that they put too much emphasis on elections and too little on the other essential features of democracy.

The power of the state needs to be checked, for instance, and individual rights such as freedom of speech and freedom to organise must be guaranteed. Robust constitutions not only promote long-term stability, reducing the likelihood that disgruntled minorities will take against the regime. Comments on Deepening democracy in South Asia: Off square one. SOUTH Asians, nearly a quarter of the world’s population, are no pushovers. 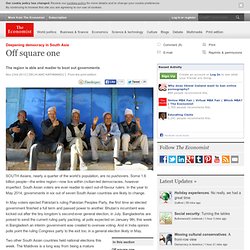 Some 1.6 billion people—the entire region—now live within civilian-led democracies, however imperfect. South Asian voters are ever readier to eject out-of-favour rulers. In the year to May 2014, governments in six out of seven South Asian countries are likely to change. In May voters ejected Pakistan’s ruling Pakistan Peoples Party, the first time an elected government finished a full term and passed power to another. Bhutan’s incumbent was kicked out after the tiny kingdom’s second-ever general election, in July. Two other South Asian countries held national elections this week. But at least a run-off on November 16th produced an elected president, after various failed attempts. Yet democrats have some things to cheer. Another South Asian country stumbling towards full democracy has more to celebrate.