Your Lifestyle Has Already Been Designed 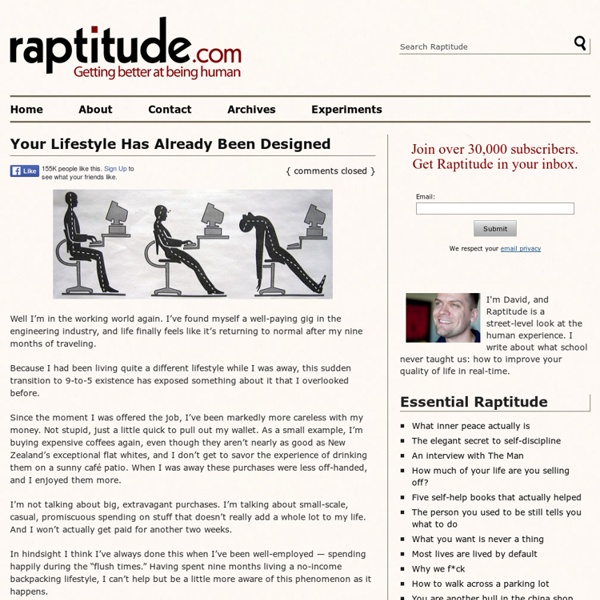 Well I’m in the working world again. I’ve found myself a well-paying gig in the engineering industry, and life finally feels like it’s returning to normal after my nine months of traveling. Because I had been living quite a different lifestyle while I was away, this sudden transition to 9-to-5 existence has exposed something about it that I overlooked before. Since the moment I was offered the job, I’ve been markedly more careless with my money. Not stupid, just a little quick to pull out my wallet. I’m not talking about big, extravagant purchases. In hindsight I think I’ve always done this when I’ve been well-employed — spending happily during the “flush times.” I suppose I do it because I feel I’ve regained a certain stature, now that I am again an amply-paid professional, which seems to entitle me to a certain level of wastefulness. What I’m doing isn’t unusual at all. It seems I got much more for my dollar when I was traveling. A Culture of Unnecessaries Is this you? Photo by joelogon Related:  well said

Giant viruses open Pandora's box Chantal Abergel/Jean-Michel Claverie Pandoraviruses infect amoebae and are larger than some bacteria. The organism was initially called NLF, for “new life form”. Later, after the researchers discovered a similar organism in a pond in Australia, they realized that both are viruses — the largest yet found. But these viruses, described today in Science1, are more than mere record-breakers — they also hint at unknown parts of the tree of life. “What the hell is going on with the other genes?” “This is a major discovery that substantially expands the complexity of the giant viruses and confirms that viral diversity is still largely underexplored,” says Christelle Desnues, a virologist at the French National Centre for Scientific Research in Marseilles, who was not involved in the study. Claverie and Abergel have helped to discover other giant viruses — including the first2, called Mimivirus, in 2003, and Megavirus chilensis, until now the largest virus known3, in 2011.

It's business that really rules us now | George Monbiot It's the reason for the collapse of democratic choice. It's the source of our growing disillusionment with politics. It's the great unmentionable. Corporate power. The political role of business corporations is generally interpreted as that of lobbyists, seeking to influence government policy. Most of the scandals that leave people in despair about politics arise from this source. On the same day we learned that a government minister, Nick Boles, has privately assured the gambling company Ladbrokes that it needn't worry about attempts by local authorities to stop the spread of betting shops. Last week we discovered that G4S's contract to run immigration removal centres will be expanded, even though all further business with the state was supposed to be frozen while allegations of fraud were investigated. The monitoring which was meant to keep these companies honest is haphazard, the penalties almost nonexistent, the rewards can be stupendous, dizzying, corrupting.

Defending rational expectations Whenever I post anything which suggests that the idea of rational expectations was a useful innovation in macroeconomics, Lars Syll writes something to the effect that I am (and therefore most mainstream macroeconomists are) “so wrong, so wrong”. Now why does this bother me? Well, to be honest, it does not bother me very much. But it does bother me a bit. If I really wanted to focus in detail on how expectations were formed and adjusted, I would look to the large mainstream literature on learning, to which Professor Syll does not refer. However most of the time macroeconomists want to focus on something else, and so we need a simpler framework. Suppose we have an equation determining wage or price inflation (a Phillips curve), where inflation expectations appear on the right hand side of the equation. Perhaps you think the alternative is equally unbelievable. This is an empirical claim. So I just do not get this obsession that some heterodox economists have with rational expectations.

Digital Necromancy: Advertising with Reanimated Celebrities The screen fades in on a man observing the Shanghai skyline from his penthouse apartment. “Water. It’s like the instincts,” he says. “Be water, my friend.” Then the iconic Johnnie Walker logo flashes across the screen. It is a typical, if especially poetic, ad for the British liquor brand. Except, one aspect of the spot isn’t so typical. Johnnie Walker’s Bruce Lee obviously isn’t the real thing, but you could be forgiven for being confused. (MORE: Mobile Mojo: Facebook Tops $38 as Social Stock Finally Hits IPO Price)The process of using a dead to sell contemporary wares is far from new. While pioneering, Coke’s efforts look amateur by today’s standards. Thanks to the work of men like Ed Ulbrich, who led the team behind Benjamin Button’s revolutionary facial animations, ‘delebs’ (as they are referred to by academics) can come back in more vivid detail than ever. At least for now, though, such realism is reserved only for those with multi-million dollar budgets. Another factor is cost.

Reality Denial: Steven Pinker’s Apologetics for Western-Imperial Violence | Public Intellectuals Project By Edward S. Herman and David Peterson Whereas in Pinker’s view there has been a “Long Peace” since the end of the Second World War,[7] in the real world there has been a series of long and devastating U.S. wars: in the Koreas (1950-1953), Vietnam, Laos, and Cambodia (1954-1975), Iraq (1990-), Afghanistan (2001- or, arguably, 1979-), the Democratic Republic of the Congo (1996-), with the heavy direct involvement of U.S. clients from Rwanda (Paul Kagame) and Uganda (Yoweri Museveni) in large-scale Congo killings; and Israel’s outbursts in Lebanon (1982 and 2006), to name a few. In the same time frame as Pinker’s “New Peace,” alleged to have begun with the dissolution of the Soviet bloc, the Warsaw Pact, and of the Soviet Union itself (1989-1991), we have also witnessed the relentless expansion of the U.S. “Among respectable countries,” Pinker writes, “conquest is no longer a thinkable option. Pinker’s “Cold War” Consider this example: Vietnam and the Antiwar Protests

Helping Economists Escape Economics There are plenty of economists who will happily admit the limits of their discipline, and be nominally open to the idea of other theories. However, I find that when pushed on this, they reveal that they simply cannot think any other way than roughly along the lines of neoclassical economics. My hypothesis is that this is because economist’s approach has a ‘neat and tidy’ feel to it: people are ‘well-behaved’; markets tend to clear, people are, on average, right about things, and so forth. Therefore, economist’s immediate reaction to criticisms is “if not our approach, then what? One such example of this argument is Chris Dillow, in his discussion of rationality in economics: Now, economists have conventionally assumed rational behaviour. However, as I and others have pointed out, people do not have two mindsets: ‘rational’, where they maximise utility, and ‘irrational’, where they go completely insane and chuck cats at people. So what are the implications of this?

Surveillaince, and the construction of a terror state Capitalism is God's Will and the Cat Drank all the Milk: How our Language Creates our Biggest Problems and Why We Can't do Anything about It Felipe Del Valle (CC BY 2.0) I have a confession to make, one that a good number of readers will find disgusting and emetic and prevent many of them from reading further. Others, however, might relate or find it interesting regardless, and so those people will continue to read, which, I suppose, is good enough for me. You see, when I was a child, from a very early age, probably as early as I can remember, I felt all around me the “Presence of God.” It was and is, in all actuality, an impossible feeling to properly describe, but I suppose to some extent that I could say that I felt some sort of “immanent-transcendent energy” “flowing” through me and through my surroundings. Anyhow, as I got old enough and more finely initiated enough in our lovely American culture, the language I would eventually come to use was, “I can feel God’s presence.” As I got older, the traditional definitions and descriptions of Gahd continued to make less and less sense, based on my own experiences.