We are increasingly being governed by people with a diminished experience of the world beyond politics. There is a growing trend for people to come into politics more or less straight from university. 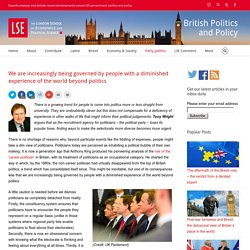 They are undoubtedly clever but this does not compensate for a deficiency of experience in other walks of life that might inform their political judgements. Tony Wright argues that as the recruitment agency for politicians – the political party – loses its popular base, finding ways to make the selectorate more diverse becomes more urgent. There is no shortage of reasons why, beyond particular events like the fiddling of expenses, people might take a dim view of politicians. Politicians today are perceived as inhabiting a political bubble of their own making. SNP to debate new single transferable vote system for Holyrood elections.

HOLYROOD'S combination of constituency and regional MSPs could be ended under plans due to be debated by the SNP. 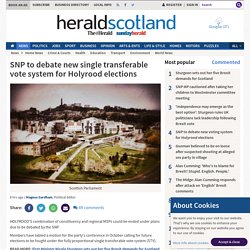 Members have tabled a motion for the party's conference in October calling for future elections to be fought under the fully proportional single transferable vote system (STV). The move would end the present hybrid system which elects two kinds of MSP, with 73 of the 129 representing constituencies and the remaining 56 in eight electoral regions. Supporters say switching to STV would be simpler for voters, who face different systems in Holyrood, Westminster, European and council elections. They also say it would make the parliament more accountable to voters because all MSPs would have to win a personal mandate from the electorate. At present, voters pick a party to represent them in the regional vote. The strange resurrection of the British Political Tradition. There is an urgent need to move beyond a nineteenth century set of ideas about democracy and governance – the so-called British Political Tradition – that should by now have long been consigned to history, write Dave Richards and Martin Smith. 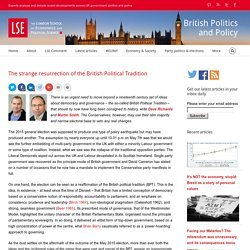 The Conservatives, however, may use their slim majority and narrow electoral base to veto any real changes. The 2015 general election was supposed to produce one type of policy earthquake but may have produced another. The assumption by nearly everyone up until 10.01 p.m on May 7th was that we would see the further embedding of multi-party government in the UK with either a minority Labour government or some type of coalition. Instead, what we saw was the collapse of the traditional opposition parties. Who Governs Britain? by Anthony King, review: 'terrifying' There is a memorable scene in the film In the Loop when a British minister is seen discussing plans for another Middle Eastern war with his opposite number in Washington while simultaneously taking a call from an irate voter with an unstable garden wall. 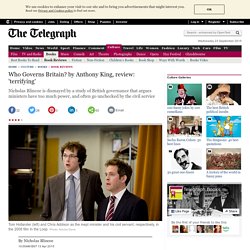 The American is amazed. He was appointed by the President and never has to worry about the everyday problems of real people. How can Britain function if its leaders double-up as the Yellow Pages, locating bricklayers for their constituents? The Canadian-born academic Anthony King has built a career out of seeing Britain through transatlantic eyes. His latest book, Who Governs Britain? King and Crewe concluded that the close connection between MPs and their constituents did nothing to make ministers better informed. READ: A fierce diatribe against lobbying and crony capitalism in British politicsKing returns to ministerial competence in this book.

Who Governs Britain? review – timely but brusque examination of UK politics. Sometimes a book can sound too timely. 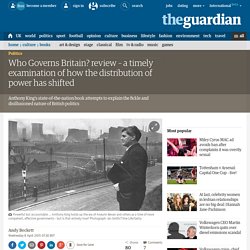 Who exactly is running the country is a question we may soon weary of asking. This shortish paperback seems recently written – the preface is dated January 2015 – and its author, Anthony King, has been sagely assessing British politics from the University of Essex for half a century. But no current book is likely to dovetail neatly with whatever bodged-together Downing Street arrangements the election on 7 May brings. “Britain’s political landscape is changing – very rapidly,” writes King, “and this particular book … may fail to detect the most recent seismic shifts.” Yet, in fact, this is not a study of potential coalitions, or the main parties’ seemingly narrowing electoral chances, or the rise of Ukip, who do not appear until five chapters in, and then only fleetingly – a welcome change after their red-carpet treatment by so many observers. He begins with a brisk history lesson. Still, in the book’s crevices are plenty of insights. How do you measure ‘democracy’? A woman prepares to vote in the local elections in the town of Khimki outside Moscow on Oct. 14, 2012. 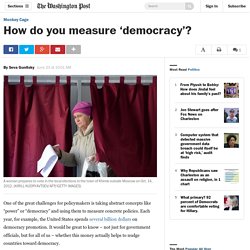 (KIRILL KUDRYAVTSEV/AFP/GETTY IMAGES) One of the great challenges for policymakers is taking abstract concepts like “power” or “democracy” and using them to measure concrete policies. Each year, for example, the United States spends several billion dollars on democracy promotion. It would be great to know – not just for government officials, but for all of us – whether this money actually helps to nudge countries toward democracy.

The problem is figuring out what we mean by democracy. A story of two post-Soviet states can illustrate the difficulty. Two post-Soviet nations’ differing levels of democracy. Any guesses for what these countries might be? I’ll save you the suspense. Both Polity and Freedom House are commonly used indices that claim to measure the same phenomenon.