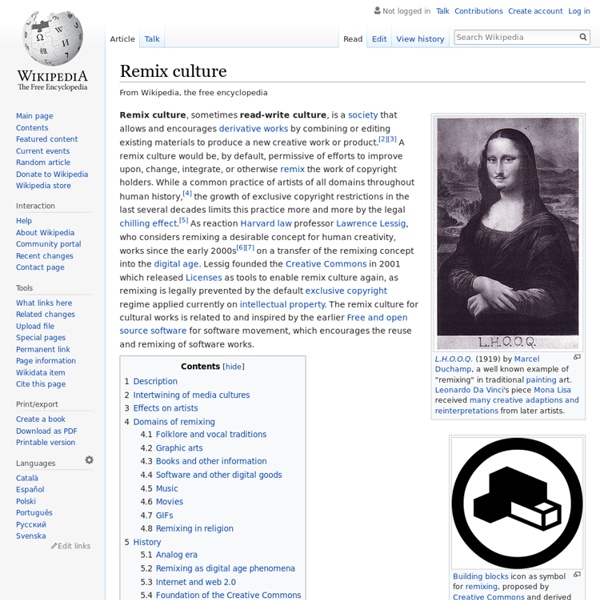 Remix culture, sometimes read-write culture, is a society that allows and encourages derivative works by combining or editing existing materials to produce a new creative work or product.[2][3] A remix culture would be, by default, permissive of efforts to improve upon, change, integrate, or otherwise remix the work of copyright holders. While a common practice of artists of all domains throughout human history,[4] the growth of exclusive copyright restrictions in the last several decades limits this practice more and more by the legal chilling effect.[5] As reaction Harvard law professor Lawrence Lessig, who considers remixing a desirable concept for human creativity, works since the early 2000s[6][7] on a transfer of the remixing concept into the digital age. Lessig founded the Creative Commons in 2001 which released Licenses as tools to enable remix culture again, as remixing is legally prevented by the default exclusive copyright regime applied currently on intellectual property.

Video Curator - What is Video Curation? Definition: A video curator has a knack for finding the gems in mountain of online video. Video curators watch hundreds of videos, gather the best video in playlists on YouTube or another website, and distributes the channel to a network of fans. The best video curators have a keen interest in the subjects that their video channels cover. You'll find video curation channels focused on everything from skateboarding to kittens, fast cars to knitting. Becoming a video curator is simple. If you want more control over your video curation channel, create a video blog. Examples: The video curator set up a YouTube channel featuring the funniest puppy videos she could find.

Remixing as a Classroom Strategy 7.7.10 | When it comes to innovations in education, Doug Sery, an acquisitions editor at MIT Press in the new media, game studies and design group, has a simple request: “more remix technologies.” “[Remixing teaches] systems thinking; connecting ideas, information and experience, as well as collaboration,” Sery says. “In the 21st-century economy, those are the skills you will need to survive.” But what is remixing and how does it apply to learning? Remixing first gained widespread attention in the hip-hop world. Today, in the ever-expanding world of what can be done with a laptop, the definition of remixing has expanded to include not only music, but also software, film, games and any other media. “It was taking songs, splicing them together and making different creations,” says Sery. And now, remixing is finding its way into the classroom as a way of fostering students’ creativity and helping them learn and express their ideas. But Is It Plagiarism? Teaching 21st-Century Skills

BBC World Service - The Forum, 05/03/2011 Curation Is Not Cheap Content... Posted by Tom Foremski - May 16, 2011 There seems to be quite a few people in marketing that look upon "curation" as an inexpensive and quick way to get content onto a site. After all, how hard can it be to collect a few links and publish them? However, "cheap" content doesn't mean it's good content. For curation to be done well it needs context. If you take a look at the work of museum curators, for example, the fantastic Balenciaga and Spain currently at the DeYoung in San Francisco, you see a tremendous amount of context around each exhibit. That's what curation online also has to demonstrate: mastery, passion, knowledge, and expertise. Otherwise, you could simply create curated content via some filters, some keywords, etc. I've written about this distinction before, aggregators versus curators and it is worth repeating because it is the human labor that's important, that's where the value will be found in any online enterprise.

Remixing Education for the 21st Century 7.7.10 | Doug Sery sees the future of education cross his desk as senior acquisitions editor for the new media, game studies and design group at MIT Press. When asked what innovation he’d like to see in the classroom, he said more remixing—the kind of creative experimentation young people do on their own by sampling music, splicing it into their own photos, or clipping excerpts from historical footage and adding it to a rap or spoken word. Not exactly something you’d expect a traditional publisher to condone. But could it be a learning tool that engages kids where they’re at? This Behind the Research looks more closely at remixing as a tool for learning and discovers some interesting experiments going on, in and out of the classroom: Darrell Johnson, a Chicago public school teacher, discusses how remixing engages students in ways that prepare them for the future and why remixing is not plagiarism.Watch examples of remix projects from Chicago students at Carter G.

Tragedy of the commons The tragedy of the commons concept is often cited in connection with sustainable development, meshing economic growth and environmental protection, as well as in the debate over global warming. It has also been used in analyzing behavior in the fields of economics, evolutionary psychology, anthropology, game theory, politics, taxation, and sociology. However the concept, as originally developed, has also received criticism for not taking into account the many other factors operating to enforce or agree on regulation in this scenario. Lloyd's pamphlet[edit] In 1833, the English economist William Forster Lloyd published a pamphlet which included an example of herders sharing a common parcel of land on which they are each entitled to let their cows graze. Garrett Hardin's article[edit] The Universal Declaration of Human Rights describes the family as the natural and fundamental unit of society. [edit] As a metaphor, the tragedy of the commons should not be taken too literally. See also[edit]

Content Curation Vs Content Aggregation Two posts brought to my attention the discussion starting to take root about the worlds of content aggregation versus content curation. A post on the Poynter blog back in early October points to the work of journalists engaging in curation via Twitter as a way of “filtering the signal from the noise.” The phrase used was “curation is the new aggregation.” A more recent post on the Simple-talk.com blog by Roger Hart delves more into the world of content curation in a broader sense, stating that it is a bit of a flavor-of-the-month. My experience with curation is more specific. Daily, and sometimes twice daily, it is my job to draw from a set pool of content, radio programs’ arts and entertainment segments, and publish them into a CMS with text and audio. Over the past few years, publishing content in this manner makes me a curator of sorts. Curation goes one step beyond aggregation by adding an active, ongoing editorial component. Curation and aggregation are similar in but a few ways. So.

Remixing and Education Elinor Ostrom Elinor "Lin" Ostrom (born Elinor Claire Awan;[2] August 7, 1933 – June 12, 2012) was an American political economist[3][4][5] whose work was associated with the New Institutional Economics and the resurgence of political economy.[6] In 2009, she shared the Nobel Memorial Prize in Economic Sciences with Oliver E. Williamson for "her analysis of economic governance, especially the commons".[7] To date, she remains the only woman so honored. Ostrom lived in Bloomington, Indiana and served on the faculty of both Indiana University and Arizona State University. She held the rank of Distinguished Professor at Indiana University and was the Arthur F. Bentley Professor of Political Science and Co-Director of the Workshop in Political Theory and Policy Analysis at Indiana University in Bloomington, as well as Research Professor and the Founding Director of the Center for the Study of Institutional Diversity at Arizona State University in Tempe. Personal life and education[edit] Career[edit] 1990.

The 3 C’s of Information Commerce: Consumption, Curation, Creation inShare180 Over the years, social networks have lured us from the confines of our existing realities into a new genre of digital domains that not only captivated us, but fostered the creation of new realities. As George Bernard Shaw observed, “Life is not about finding yourself, life is about creating yourself.” Such is true for social networks and the digital persona and resulting experiences we create and cultivate. It was the beginning of the shift in behavior toward an era of digital extroversion, self-defined by varying degrees of sharing, connections, and engagement. On Facebook, Twitter, MySpace, et al., we were attracted by the promise of reigniting forgotten relationships and enamored by the sparking of new connections. With each new connection we wove, we were compelled to share details about ourselves that we might not have divulged in real life. Our concerns of privacy or the lack thereof, now require education. The Social Genome The 3C’s, Consumption, Creation, and Curation