Amazing LEGO Japanese Castle Opens Like a Pop-Up Book. Talented LEGO artists recreate famous structures all the time, and while we never get sick of seeing the incredible work they do, the bar has just been raised—or rather the bar has been “popped”—after seeing this LEGO building of a Japanese castle that opens just like a children’s pop-up book. 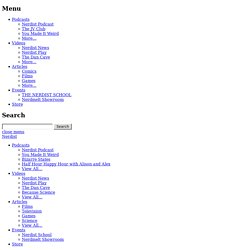 Made and posted online by YouTube user talapz, this castle starts off as a flat structure that looks like a one story underground garage parking lot, but when he starts to unfold it a replica of the Himeji Castle, “widely considered Japan’s most spectacular castle for its imposing size and beauty,” springs into being, actually locking into place as it comes to its full standing.

Amazingly, talapz says this project uses no adhesives, which makes it hard to understand the engineering behind it, but obviously makes it way more impressive. He says it took him 15 months to finish and weighs over 27 pounds. Dazzling Bismuth Crystals Look Like Hypnotizing Rainbow Stairs. 100-Year-Old Photos Capture Authentic Daily Life in Japan. These rare shots of vintage Japan during 1908 are thanks to the acute artistic eye of Arnold Genthe. 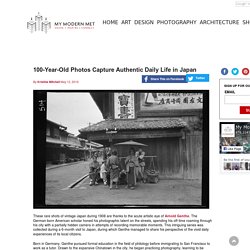 The German-born American scholar honed his photographic talent on the streets, spending his off-time roaming through his city with a partially hidden camera in attempts of recording memorable moments. This intriguing series was collected during a 6-month visit to Japan, during which Genthe managed to share his perspective of the vivid daily experiences of its local citizens.

Born in Germany, Genthe pursued formal education in the field of philology before immigrating to San Francisco to work as a tutor. Drawn to the expansive Chinatown in the city, he began practicing photography, learning to be subtle in order to capture the genuine expressions of the neighborhood's diverse characters. Though most famous for his San Francisco street shots, Genthe did extend his talents abroad, apparent in his noteworthy Japanese series. Arnold Genthe Collection: Website via [Vintage Everyday] The Best Productivity Tricks Used By Evil Dictators. Archeologists Discover Ancient Skeleton Mosaic That Says "Be Cheerful and Live Your Life" Turkish archaeologists have recently unearthed a rare mosaic that dates back to 3rd century BC. 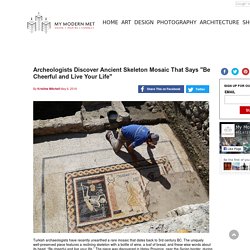 The uniquely well-preserved piece features a reclining skeleton with a bottle of wine, a loaf of bread, and these wise words about its head: “Be cheerful and live your life.” The piece was discovered in Hatay Province, near the Syrian border, during construction of a cable car system. The enlightened expression was unearthed, making up one part of an elaborate triptych. The wise mosaic with sage advice is believed to have decorated the dining room of a wealthy family’s villa in the Greek-Roman city of Antioch. The ancient city of Antioch is known as the early center of Christianity, established in the 4th century BCE. Via [Colossal, The History Blog] Infographic Reimagines “Smart” to Reveal Nine Types of Intelligence That Everyone Possesses.

In school, calling someone smart often meant they were good at math or science, but American developmental psychologist Howard Gardner has a different conception of what makes a person bright. 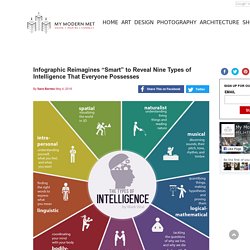 Instead of there being one type of intelligence, he contends that there are actually nine that we possess: naturalist (nature smart); musical (sound smart); logical mathematical (number/reasoning smart); existential (life smart); interpersonal (people smart); bodily kinesthetic (body smart); linguistic (word smart); intra-personal (self smart); and spatial (picture smart). To visualize what these intelligences mean, Mark Vital designed an infographic for his entrepreneurial-focused site Funders and Founders. The image is based on Frames of Mind: The Theory of Multiple Intelligences by Gardner, and it’s a helpful, easy-to-understand guide that color codes and defines the factions. You Can Experience Fox Heaven in Japan. Man Rescues Three Wild Foxes Who Continue to Live with Him for Years. In Thomastown, Kilkenny, Ireland, a man named Patsy Gibbons has taken three wild foxes under his wing, caring for them as one might tend to any average household pets. 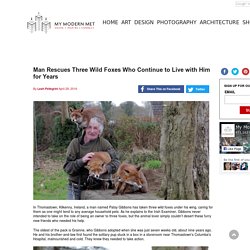 As he explains to the Irish Examiner, Gibbons never intended to take on the role of being an owner to three foxes, but the animal lover simply couldn’t desert these furry new friends who needed his help. The oldest of the pack is Grainne, who Gibbons adopted when she was just seven weeks old, about nine years ago. He and his brother-and-law first found the solitary pup stuck in a box in a storeroom near Thomastown's Columba's Hospital, malnourished and cold. They knew they needed to take action. The 15 Best Robot/Mecha Anime of All Time.

Mecha anime shows will never go out of style. 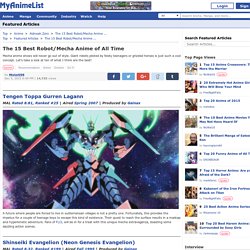 Rescued Hedgehog with Adorable Fanged Teeth Has a Playful New Lease on Life. Sir Hodge Huffington the Cricket Slayer, aka Huff, is an adorable African Pygmy hedgehog who has gained fame on Instagram thanks to his unusual, tiny fanged teeth. 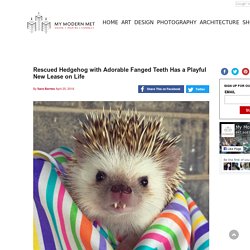 Gorgeous Cat Has Magically Beautiful Eyes That Are Each Two Different Colors. This cat has a fabulous pair of eyeballs, but there is a perfectly normal explanation for its magical looking peepers. 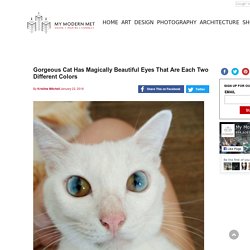 The technical name for the condition is sectoral heterochromia, a genetic mutation that causes one iris to contain two completely different colours. This is a subtype of Heterochromia Iridis, which basically can be translated from Greek into "different coloured irises. " It is a condition that can occur in humans as well as animals, and there are no associated medical disadvantages in any way, meaning there is no real downside to those cool looking colours. So what causes heterochromia? Eye colour is determined by the amount of melanin in an animal’s genetic makeup. Exquisite Electric Bikes Made with Vintage Parts From the 1950s. As the founder of Agnelli Milan Bikes, Italian craftsman Luca Agnelli is melding the comfort and convenience of today’s technology with the artistry of old-school design. 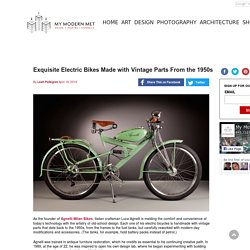 Each one of his electric bicycles is handmade with vintage parts that date back to the 1950s, from the frames to the fuel tanks, but carefully reworked with modern-day modifications and accessories. (The tanks, for example, hold battery packs instead of petrol.) 5 Reasons to Use to Vivaldi Instead of Chrome or Firefox. Samochody, jakie mogliśmy produkować w Polsce - Moto. Thinking Outside The Record Box – 20 Innovative Ways To Store Your Vinyl. Sure, you could keep your burgeoning record collection stored neatly in boxes or on overloaded shelves. 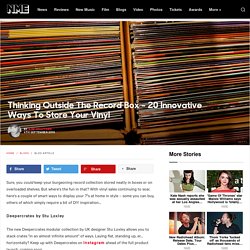 But where's the fun in that? With vinyl sales continuing to soar, here's a couple of smart ways to display your 7"s at home in style – some you can buy, others of which simply require a bit of DIY inspiration... Deepercrates by Stu Loxley The new Deepercrates modular collection by UK designer Stu Loxley allows you to stack crates "in an almost infinite amount" of ways. Laying flat, standing up, er... horizontally? Wall Frames. Women Beauty From Around The World In 100-Year-Old Postcards. Untitled. 396. Friends: *groans in a very classy and sophisticated kinda way* Brick-built Adventure Time figures. Thanks a lot for all your recent support! It's been thrilling to see this project getting so much attention in the last couple of days.