AS1.16 Christchurch - Was it an aftershock?

Learning from the Christchurch Earthquakes - Google Slides. The tectonic forces that are shredding New Zealand. By Wendy Zukerman This week the New Zealand city of Christchurch felt the force of a 6.3-magnitude earthquake. 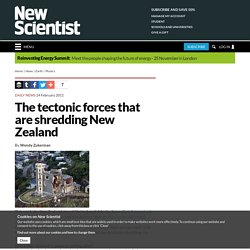 The quake came just five months after an even larger one struck 40 kilometres west of Christchurch, near the town of Darfield. In fact New Zealand experiences around 14,000 tremors each year, although most are too small to be felt. They are a sign of the tectonic processes that are gradually shredding the country. Why is New Zealand so prone to earthquakes? Which areas are most vulnerable? The relatively low-density continental crust of the North Island, which sits on the Australian plate, is forcing the dense oceanic crust on the Pacific plate beneath it in a process called subduction.

Advertisement Something similar is occurring to the south-west of South Island. In between, the continental crust on the Pacific and Australian plates slide past one another on South Island, creating a conservative plate margin where crust is neither created nor destroyed. More on these topics: How does a seismograph work? What is the Richter scale?" A seismograph is the device that scientists use to measure earthquakes. 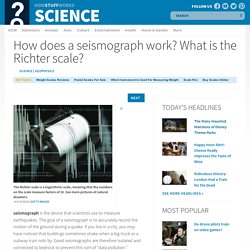 The goal of a seismograph is to accurately record the motion of the ground during a quake. If you live in a city, you may have noticed that buildings sometimes shake when a big truck or a subway train rolls by. Good seismographs are therefore isolated and connected to bedrock to prevent this sort of "data pollution. " How Seismographs Work. Scientists who weren't in Chile during this morning's aftershocks nevertheless knew the moment the rumbling started, thanks to a global network of quake-detecting instruments called seismographs. 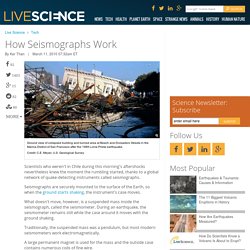 Seismographs are securely mounted to the surface of the Earth, so when the ground starts shaking, the instrument's case moves. What doesn't move, however, is a suspended mass inside the seismograph, called the seismometer. During an earthquake, the seismometer remains still while the case around it moves with the ground shaking. Traditionally, the suspended mass was a pendulum, but most modern seismometers work electromagnetically. A large permanent magnet is used for the mass and the outside case contains numerous coils of fine wire. Movements of the magnet relative to the case generate small electric signals in the wire, which can be sent to a computer or recorded onto paper to create a seismogram. Seismographs can detect quakes that are too small for humans to feel. Canterbury FAQ - Latest News. Seismic waves. When an earthquake occurs, the shockwaves of released energy that shake the Earth and temporarily turn soft deposits, such as clay, into jelly (liquefaction) are called seismic waves, from the Greek ‘seismos’ meaning ‘earthquake’. 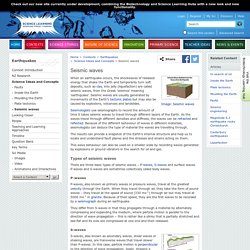 Seismic waves are usually generated by movements of the Earth’s tectonic plates but may also be caused by explosions, volcanoes and landslides. Seismologists use seismographs to record the amount of time it takes seismic waves to travel through different layers of the Earth. As the waves travel through different densities and stiffness, the waves can be refracted and reflected. M 6.3, Christchurch, 22 February 2011 - Earthquake. Why the 2011 Christchurch earthquake is considered an aftershock. Canterbury Earthquakes Information Paper. Liquefaction demonstrated – Historic earthquakes. Seismic Waves in Christchurch. Canterbury earthquakes. An earthquake near Christchurch in September 2010 started a chain of events still being felt over 2 years later. 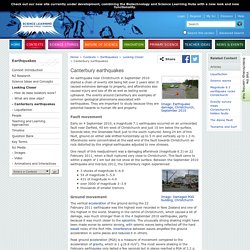 It caused extensive damage to property, and aftershocks also caused injury and loss of life as well as lasting social upheaval. The events around Canterbury are examples of common geological phenomena associated with earthquakes. They are important to study because they are potential hazards to human life and property. Fault movement Early on 4 September 2010, a magnitude 7.1 earthquake occurred on an unrecorded fault near Darfield, 40 km west of Christchurch and just 10 km below the surface. One result of this readjustment was a damaging aftershock (magnitude 6.3) on 22 February 2011, when a fault ruptured very close to Christchurch.

Seismic Waves" This content is not compatible on this device. 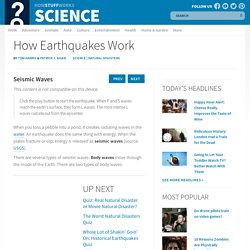 Click the play button to start the earthquake. When P and S waves reach the earth's surface, they form L waves. Christchurch earthquake kills 185. On Tuesday 22 February 2011 at 12.51 p.m. 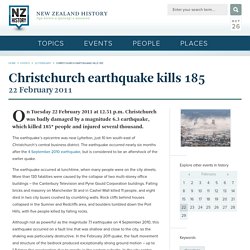 Christchurch was badly damaged by a magnitude 6.3 earthquake, which killed 185* people and injured several thousand. The earthquake’s epicentre was near Lyttelton, just 10 km south-east of Christchurch’s central business district. Liquefaction. Liquefaction is a process that temporarily turns firm ground into a liquid. 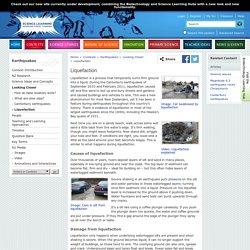 During the Canterbury earthquakes of September 2010 and February 2011, liquefaction caused silt and fine sand to boil up and bury streets and gardens and caused buildings and vehicles to sink. This was a new phenomenon for most New Zealanders, yet it has been a feature during earthquakes throughout this country’s history. There is evidence of liquefaction in most of the largest earthquakes since the 1840s, including the Hawke’s Bay quake of 1931. Next time you are on a sandy beach, walk across some wet sand a little back from the water’s edge.

It’s firm walking, though you might leave footprints. Causes of liquefaction Over thousands of years, rivers deposit layers of silt and sand in many places, especially in low-lying ground and near the coast.