Holiday Stuffed Pumpkin. I often feel a sting of jealousy at dinners during the holiday season. 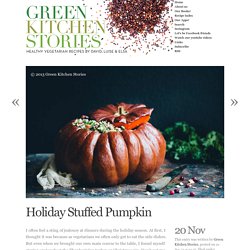 At first, I thought it was because as vegetarians we often only get to eat the side dishes. But even when we brought our own main course to the table, I found myself staring enviously at the Thanksgiving turkey or Christmas pig. Don’t get me wrong, it’s not like I want to eat them. It’s just all the fuss around the centerpiece of the table that makes me feel like I’m missing out on something. 15 Fresh Salads for the Thanksgiving Table Recipe Roundup from The Kitchn. You Won't Miss the Turkey With This Savory Squash Pudding. Planning an almost meatless feast or vegetarian meal this Thanksgiving? 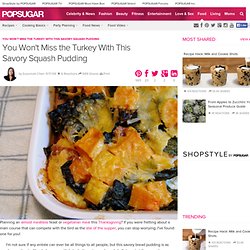 If you were fretting about a main course that can compete with the bird as the star of the supper, you can stop worrying; I've found one for you! I'm not sure if any entrée can ever be all things to all people, but this savory bread pudding is as close as it gets. It's wholesome, with kale, butternut squash, and shallots, yet at the same time hearty and satisfying. 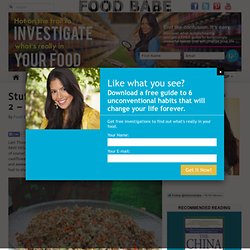 The theme of the evening was Thanksgiving of course! My favorite dish was this raw stuffing… The crunch of the pecans and savory cauliflower, celery, onions and carrots is just dynamite! Everyone one in the class oooooed and awwwwed all over this dish. Spaghetti Squash Casserole - A Vegan Thanksgiving Dish.

I am so pumped my Mom is hosting Thanksgiving this year. 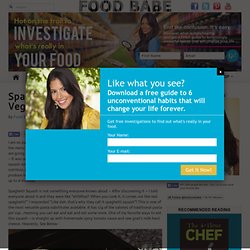 Last night we came up with the menu and I absolutely can’t wait to share the yummy organic Thanksgiving recipes we are going to make. This is a perfect recipe for a side dish and it might just make the menu – It was something I made on Saturday night because I had a huge organic spaghetti squash on my counter for the last two weeks. Winter squash like this have a ton of nutrition, packed with vitamins and minerals because they have much more time to produce nutrients compared to summer squash.

You can also store it longer – sometimes up to 6 months! Spaghetti Squash is not something everyone knows about – After discovering it – I told everyone about it and they were like “eh! Back to the recipe – This is my take on traditional yellow squash casserole that is usually made with lots of cream, bread crumbs, eggs and cheese. Eat Well Folks! Food Babe’s Spaghetti Squash Casserole Total time Makes approximately 6-8 servings. Swiss chard and sweet potato gratin. Roasted Brussels Sprouts With Pomegranate and Hazelnuts Recipe : Bobby Flay. 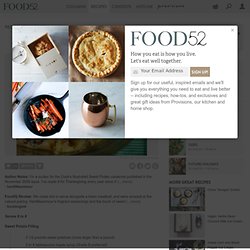 I've made it for Thanksgiving every year since it's been published. Other recipes have come and gone, but this one has stuck like fly-paper. Inspired by AntoniaJames I will be making an all food52 Thanksgiving dinner this year. Gulp! That means no CI Sweet Potato Casserole!! Potato Mash with Leek Confit and Bacon recipe from Food52. Author Notes: I love leeks, potatoes and bacon in soup and decided to make a little potato casserole with the same ingredients. 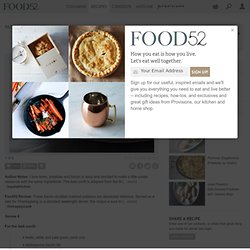 The leek confit is adapted from the Molly Wizenburg version with the substitution of rendered bacon fat for the butter. (less)Author Notes: I love leeks, potatoes and bacon in soup and decided to make a little potato casserole with the same ingredients. The leek confit is adapted from the M (…more) - inpatskitchen Food52 Review: These bacon-studded mashed potatoes are absolutely delicious. Canal House's Cranberry-Port Gelée. Every week -- often with your help -- FOOD52's Senior Editor Kristen Miglore is unearthing recipes that are nothing short of genius. 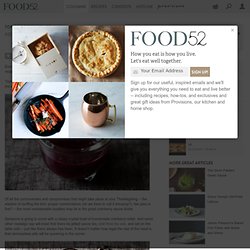 Today: 5 ingredients, 10 minutes, nothing but class -- a DIY cranberry jelly for anyone who loves the stuff in the can (and even the ones who don't). Of all the controversies and compromises that might take place at your Thanksgiving -- the wisdom of stuffing the bird, proper nomenclature (do we have to call it dressing?) , two pies or five?

-- the most unshakeable loyalties may lie in the great cranberry sauce divide. Someone is going to come with a classy crystal bowl of homemade cranberry relish. Good Eats Roast Turkey Recipe : Alton Brown. Directions Watch how to make this recipe.2 to 3 days before roasting: Begin thawing the turkey in the refrigerator or in a cooler kept at 38 degrees F. 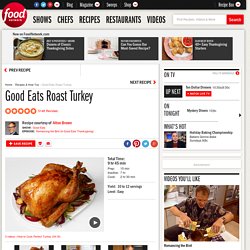 Combine the vegetable stock, salt, brown sugar, peppercorns, allspice berries, and candied ginger in a large stockpot over medium-high heat. Stir occasionally to dissolve solids and bring to a boil. Then remove the brine from the heat, cool to room temperature, and refrigerate. Early on the day or the night before you'd like to eat: Pumpkin muffins. See, now I’m a girl who keeps my promises, eh? 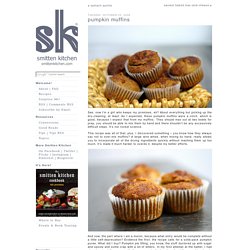 About everything but picking up the dry-cleaning, at least. As I expected, these pumpkin muffins were a cinch, which is good, because I expect that from my muffins. They should max out at two bowls for prep, you should be able to mix them by hand and there shouldn’t be any excessively difficult steps. It’s not rocket science. This recipe was all of that, plus, I discovered something – you know how they always say not to over-mix muffins? And now, the part where I am a moron, because what entry would be complete without a little self-deprecation? Despite my every attempt to wreck them, they’re a good pumpkin muffin, worthy of your palate. Finally, in case you thought I was joking about my unbridled fervor over the new Gourmet issue yesterday, I offer up this evidence: And this excludes the ones I determined too much of a calorie-heft for a weekday night, but am saving for later.

Heat oven to 350 degrees. Mini Apple Pies with Cheddar Recipe. Meta Given's Pumpkin Pie recipe from Food52. Author Notes: Caramelizing the pumpkin puree means that this is a pie with guts, one that won't just sit there phoning in the pumpkin flavor, burying it under lots of spice. 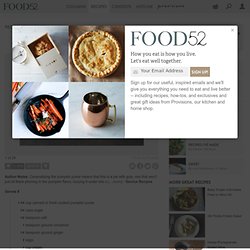 But its genius is much more than that. You don't have to blind bake the crust. You use real milk and cream instead of evaporated milk, with predictably better results. And because you blast it at 400 degrees the whole time, it bakes in 25 minutes -- less than half the time of your average back-of-the-can recipe. From Meta Given's Modern Encyclopedia of Cooking, an underrated gem of a cookbook.

Butternut Squash & Pepita Dressing Recipe. Wild Mushroom Stuffing Recipe. Apricot Canapes Recipe. Pumpkin Pie with Rum Recipe. Gingered Cranberry Fig Chutney recipe from Food52. Author Notes: I've never been much of a fan of straight-up cranberry sauce, in fact, the jellied kind makes me want to gag. I much prefer a condiment like this, that is more than just cranberries and a lot of sugar. This chutney gets it's sweetness not just from sugar, but from raisins, some OJ and dried black mission figs.

The cider vinegar and lemon juice lend a sparkling acid note, and the ginger and red pepper flakes bring heat. Cardamom,Orange and Chocolate Ribbon Cookies recipe from Food52. Author Notes: Part of my gift box of baked goods is always these ribbon cookies, they are festive looking and delicious. This cookie is divided into four layers, a chocolate layer to which I added toasted walnuts and a vanilla layer with cardamom and orange zest. This recipe, which I have tweaked over the years, came from my mother ,and she got it from Better Homes and Gardens magazine in the 1960's. The original recipe does not contain orange or cardamom; you can omit if you like and just add the vanilla extract and, as the original recipe calls for, rum flavoring.